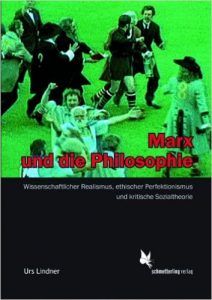 With his work Marx und die Philosophie Urs Lindner, philosopher and political scientist, tries to capture the development of Marx as a researcher who started as a philosopher in the Hegelian tradition and became an empirical social scientist with a far more elaborate understanding of history and politics. Beginning with the young Marx and ending with Marx’s late work prior to his death, Lindner’s study covers a large number of writings.

This alone would be a highly ambitious project, but Lindner goes further: first, he aims to offer a suitable philosophical interpretation of Marx; second, he wants to combine the “materialist-scientific” with the “ethico-political” Marx, and third he wishes to extract from Marx’s theories what is usable for the project of a critical social theory.

In order to capture “the complete Marx” and to offer an interpretation different to the structuralist or “Hegelian” Marx readings, Lindner adopts three angles. The first perspective is based on theory of science and therefore the author looks for Marx’s method or his presumptions. Second, Lindner uses an ethical perspective to show what role ethics plays in Marx’s writings. Third, dealing with Marx’s philosophy of history, i.e. historical materialism, Lindner takes on a “deconstructive” perspective.

For his presentation Lindner chooses a chronological order in accordance with his interpretation of Marx’s development. Lindner sees an epistemological break within Marx’s work which would consist in a shift of philosophical fields. At first Marx followed and was part of the Young Hegelian discourse (Chapter 2), but in 1845 Marx was already beginning to develop a “realist social philosophy” (Chapter 3). This development was interrupted, according to Lindner, by Marx’s theory of historical materialism which had its heyday from 1846 to 1850 (Chapter 4). In 1850 Marx started his social scientific research based on the earlier developed social philosophy (Chapter 5). This research led finally to Capital (Chapter 6). But, as is sometimes forgotten, Marx’s work did not end at this point and so Lindner also presents the “late Marx” (Chapter 7). These five Marx-centred chapters are accompanied by a sketch of modern Western philosophy (Chapter 1), and a final chapter asking which components of Marx’s theories are still usable for a critical social theory.

The aim of Chapter 1 is to give a short introduction to the discourse Marx’s work was built on. Lindner focusses here on the development of the modern sciences, the enlightenment and French materialism.

In Chapter 2 the author’s analysis and interpretation of the young Marx begins. At this point as well, Lindner tries to lead the audience smoothly to Marx by at first portraying the Young Hegelian philosophy. In a second step, the author shows how Marx was part of this discourse and at which point Marx finally broke with this philosophy. In his very complex and detailed analysis, Lindner again addresses key concepts which will play a role in Marx’s later work.

Chapter 3 deals with the turning point in Marx’s work which Lindner identifies with the “Theses on Feuerbach” and the German Ideology. According to Lindner, Marx created his own philosophical approach which will play an important role within Marx’s later work. Lindner calls this approach “realist social philosophy”. It is based on a naturalist social ontology (including, among others, the question of the relation between society and nature); on criticism of ideology (which Lindner convincingly introduces as neither functionalistic nor paternalistic); and on perfectionist ethics (a concept of the “good life” based on Marx’s normative anthropology).

With Chapter 4 Lindner’s actual critique begins, after an interpretative summary of Marx’s theoretical development. Lindner begins to take, as he says, a deconstructive perspective in order to deal with Marx’s philosophy of history (187). He first reconstructs historical materialism according to Marx. In a second step, Lindner outlines the weaknesses of this approach (although it could be asked whether this critique actually means deconstructing historical materialism). Interestingly however, Lindner not only shows where Marx failed on a theoretical level but also where he failed on a political level – by for instance having not only a strong Eurocentric but also an almost chauvinist perspective on colonialism.

In Chapter 5 Lindner focuses on Marx’s transition to being a social scientist. In the first section, Lindner shows how Marx in the 18th Brumaire overcame his historical materialism. In the second section, die Grundrisse, Marx’s first economical work is introduced. Of importance here are Marx’s reflections on theory construction, which get described by Lindner in detail. The chapter concludes with Lindner’s thesis that the later Marx would no longer see history as determined by laws, or functionalistic explanations as the way to capture historical developments. Unlike the historical materialist approach, phenomena are now not explained by their supposed functions, but by illustrating their formation or by outlining their inner mechanisms.

In Chapter 6 the author turns to Marx’s main work, Capital. In four steps Lindner brings together the different kinds of critique Capital contains, and shows how the “materialist researcher Marx” is related to the “ethical-political Marx”. How Lindner systematizes the different aspects of critique is very impressive. The discussion of the role of dialectics in Capital, however, is comparatively weak. For example, Lindner differentiates between a dialectical development of concepts (according to Hegel) and a development of “fields of concepts” which becomes enriched with explanatory content (to be found in Capital) (334). What exactly defines this distinction remains, unfortunately, unclear.

In Chapter 7 Lindner summarizes Marx’s late work. According to the author, two main themes can be identified: the rejection of historical materialism and the question of the constitution of a post-capitalist society.

In the Introduction Lindner states he wants to “deal offensively” with Marx, i.e. to apply Marx to contemporary problems (17). In the final chapter Lindner initiates such an application by showing what role Marx’s work can play for a contemporary critical social theory. With regard to different aspects of Marx’s complete works, Lindner not only summarizes the results of the previous chapters but also illustrates possible links to a social theory whose aim it is to reveal all kinds of power relations.

Lindner’s work convinces one by offering an interpretation of Marx’s work, outlining the historical and philosophical contexts, including his own original theses. Lindner argues, for example, that Marx’s economical work includes three kinds of “immanent critique models”: Normimmanenz (here reality is criticised by established norms or self-conceptions), Widerspruchsimmanenz (reality is criticised by its inherent contradictions) and Lebensimmanenz (reality is criticised through a certain understanding of human nature and a concept of a good life) (91). Distinctions like these actually help to approach a comprehensive study like Capital.

On the other hand, it has to be said, Marx und die Philosophie is not suitable as an introduction to Marx, although every work Lindner is referring to is (to a variable extent) summarized and a useful glossary of mostly philosophical terms is given. Lindner’s study is nevertheless very technical, and the reader should have a philosophical background and also have encountered Capital already.

However, as mentioned before, Lindner makes an allowance for guiding the audience into the philosophical discourse of Marx. For instance, in Chapter 2 Lindner uses a discourse-analytical approach and identifies central topics, typical concepts or the method of the Young Hegelians. These introductions could be of incredible assistance, especially for non-philosophers. However, Lindner abstains from providing a similar introduction in the following chapters, which I view as unfortunate.

Much more problematic are Lindner’s references, in a few passages which are simply missing altogether (especially, unfortunately, when Lindner speaks about Marx changing his understanding of historical laws, 259, 260).

It must also be noted that the passages discussing the role of historical materialism are quite ambiguous. As mentioned earlier, Lindner shows in fact that Marx changed his understanding of history crucially later on. But at some points it seems Marx would revert to a mechanistic and reductionist understanding of history. The question is now how to deal with those passages. Lindner, I would say, does the following: He reduces the theory of historical materialism to the thesis “the technical development of the productive forces is the dominant factor in history”. Lindner calls this the “classical” historical materialism, which he distinguishes from a weaker version found, for example, in the last pages of Capital (338). This way Lindner can show that Marx gradually takes back his philosophy of history and he is actually able to save Capital from an overly strong historico-philosophical reading. But the question remains whether, by narrowing down historical materialism like this, Lindner chose a far too simple way of dealing with the tensions inherent in Marx’s work.

Despite these remarks, Lindner’s work is convincing. The author succeeds in presenting the reader with a philosophical Marx, referring to the discourse back then and also including Marxist discussions from the 21st century occasionally. His second aim, to combine the analytical or scientific-materialist Marx with the ethical-political Marx, he achieves even more successfully. In systematizing the different kinds of critique Marx is using, Lindner proves that a normative anthropology and an understanding of the good life does still play a role in Marx’s later work. And although his presentation of the link between critical social theory and Marx could have been more elaborated, it becomes clear that Marx’s work can in fact be a contribution to theories with emancipatory aspirations.

Nonetheless, Lindner deals with Marx very honestly. He does not try to hide Marx’s failures (whether they concern his political decisions, his scientific work or his personality). Additionally, the book cover deserves a compliment. Choosing a scene from Monty Python’s sketch portraying Marx and other philosophers playing soccer shows that Lindner does not take himself or his topic deadly seriously.

The main strength of this book, however, is its complexity. The reader gets an impression of the wide range of topics Marx worked on, his different methodological approaches and more importantly the continuities and breaks within his work. Throughout, Lindner shows an extensive knowledge of Marx’s writings, including articles usually not recognized. For that reason Marx und die Philosophie can be recommended to those already familiar with Marx and interested in the development of the German Marxian discourse of recent years.