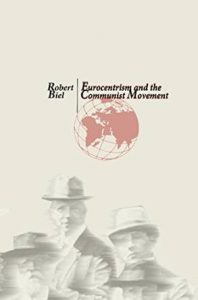 Originally published in 1985 as a “movement” mimeograph in the anti-revisionist Marxist-Leninist circles in the UK, Robert Biel’s Eurocentrism and the Communist Movement [ECM] is a subterranean classic. Pre-dating Samir Amin’s seminal Eurocentrism by three years, ECM not only forms part of Eurocentrism‘s DNA, as well as that of any other heterodox marginal Marxist work of theory since the mid-80s. ECM is also significant in its ability to locate the problematic of Eurocentrism within the heart of Marxist in order to argue for a renewal of historical materialism. As one of the editors of the Encyclopedia of Anti-Revisionism Online blurbs on the back-jacket, ECM was ‘singularly the most outstanding contribution in the checkered history of the anti-revisionist movement in Britain.’

Although one of the problems that forgotten classics often encounter is that they may function more as relics, however important, than timely interventions in contemporary debates, ECM generally avoids this pitfall. Aside from an additional Preface and Afterword, extra footnotes, and references to Biel’s more recent work (The New Imperialism and the masterful, though under-reviewed, The Entropy of Capitalism), its updates are interwoven throughout the entire text so that is often difficult to tell what was original and what was recently added. Most importantly, though, is the fact that ECM‘s concerns remain timely.

Biel’s stated aim ‘was to construct a Marxist theory of political economy which could reflect the real relationships in the contemporary world system’ that, at the high point of anti-revisionist and anti-imperialist struggle, could be better grasped than in the past (or, as Biel also argues, in the period of capitalist triumphalism where revolutionaries were forced to retreat). In order to construct the basis of this new theory of political economy, though, ‘we also had to conduct a negative task – one of demolition: to identify and remove the blockage that stood in our way.’ (1)

Driven by the sense that Marxist theory can only develop in the crucible of resistance movements, Biel’s supposition is that the high tide of communist and internationalist struggle in the 1960s-70s produced the possibility of opening up a new Marxist theoretical terrain, as well as identifying the limits to be transgressed in order to reach this terrain. These limits are Eurocentrism, an ideology that has colonized the heart of Marxist theory so as to deform innumerable social movements – negatively affecting both the Russian and Chinese Revolutions, countless smaller resistance struggles, and the anti-revisionist movement that followed the Sino-Soviet split. His argument is that the failure to address this problem has over-determined dogmatism, mechanical applications of Marxist theory, and revisionism.

Indeed, Biel provides convincing arguments as to how the failure of Marxist movements to divest themselves of a Eurocentric worldview is intimately connected to opportunism and mechanical materialism. The opportunist position of reform over revolution, or the peaceful existence with capitalism, was historically premised on the denial of struggles at the global peripheries, and collaboration with colonialism; the theory of productive forces was premised on a development discourse where colonial development should be supported so as to create a third world proletariat and bourgeoisie. This Eurocentric blockage would carry over into other Marxist tendencies, even ones that were not immediately revisionist or economistic. For example, in the First Congress of the Third International, Trotsky could make the Eurocentric argument that the ‘smaller peoples’ in Africa and Asia would be freed, not by their own agency, but by a proletarian revolution in Europe that would ‘free the productive forces of all countries from the tentacles of the national states.’ (115) Of course, Biel notes that there was also a creative development of theory under Lenin that challenged these Eurocentric categories: hence, in the Second Congress of the Third International, the position expressed by Trotsky (and others) above was replaced, through debates on the national question, by the position (that Lenin had held earlier) that resistance movements at ‘the weakest links’ possessed the most revolutionary potential.

But alongside every creative development of theory emerging from revolutionary struggle that challenged the Eurocentric aspects of Marxism, there has also been, despite important successes, an inability to go far enough. Biel traces this problem from the time of Marx and Engels right up to the Chinese-inspired New Communist Movement (the context in which the original version of this book was written) that was not only at risk of ‘dogmatism’ – because ‘with any movement to uphold orthodoxy, you risk becoming conservative and scared of new ideas’ (6) – but failed to truly grasp ‘that aspect of the corrupting influence of imperialism [Eurocentrism] which ought to have been the target of struggle … [that] will sneak into the anti-revisionist movement and grab it from within.’ (6)

Since this book’s first version, the engagement with Eurocentrism has fallen into two camps: i) a Marxism that attempts to deny that Eurocentrism was a significant problem, going so far as to claim – as, for example, Kevin Anderson does in Marx at the Margins (2010) – that Marx and Engels succeeded in eventually overcoming Eurocentrism; ii) an anti-Marxism, typified by many post-colonialists, that dismisses Marxism because of its Eurocentric origins. Although Amin’s Eurocentrism does not fall into either of these camps, it is very possible that Amin, who was briefly part of the anti-revisionist current in Europe, was aware of the original manuscript. More significantly, though, is the fact that ECM is not content simply to describe the phenomenon of Eurocentrism, as well the Eurocentric aspects of actually existing capitalism, but provides a history of its influence within the communist movement from Marx to the present. This history is intensely historical materialist: it is an immanent critique proving that the tools of the Marxist movement, regardless of its Eurocentric limitations, are the only tools capable of rigorously revealing, as well as overcoming, this problem. Anti-Marxist critiques of Eurocentrism have never been able to provide this kind of the nuanced and concrete critique of Marxist history. Biel even demonstrates, in ECM, how these anti-Marxist critiques misrepresent historical materialism in order to dismiss it as a whole.

Avoiding the genetic fallacy, where a theory is dismissed because of its origins, Biel argues that historical materialism could have only emerged, based on ‘the real origins’ of capitalism, in Europe – historical materialism is, first and foremost, ‘the application of dialectics to the development of, and resistance to, the capitalist mode of production.’ (4) At the same time, however, he grasps how a theory’s origin, though not the basis for its dismissal, results in a material problem: the ideology of the time and context affects the theory as, to use the language he developed in The Entropy of Capitalism, a ‘path dependency’. Hence, due to the supremacy of European colonialism that was prevalent in Marx’s time – when the emergence of capitalism was informed by European imperialist hegemony – ‘the ideological fall-out of this supremacism was bound to infiltrate to some extent all ideologies evolving within the core, including those which challenge, or claim to challenge capitalism.’ (5)

So on the one hand, Marxism is the only theory capable of developing a revolutionary movement, but on the other hand it is contaminated by its social context. Of course, all theories are contaminated by their historical and social limits, which is precisely a proper historical materialist understanding: ‘the notion of upholding an ossified “original orthodoxy” is, in any case, a contradiction in terms simply because the essence of Marxism can only be defended in its development: it is, and can only be, a living thing.’ (7) And the ‘ossified forms of communism,’ according to Biel, ‘were actually opposed to the original spirit of Marxism, as well as being hostile to the further developments which would be needed in combating Eurocentrism.’ (7)

Proceeding from this basis, Biel provides a historiography of struggle between Eurocentric and anti-Eurocentric currents of Marxism. For Biel, Eurocentrism functions as an ideology in the truest sense of the word – a ‘self-determining concept’ and ‘material force’ – from the inception of Marxist theory. Here he demonstrates, long before Anderson’s Marx at the Margins, that the strength of historical materialism was first proved by Marx’s ability to begin to transcend his Eurocentric limits. Unlike Anderson, however, Biel argues that these limits were never fully transcended. (97-9) Always critiquing from the left, and criticizing anti-Marxist analyses of the problem, Biel demonstrates that the moments of Marxism’s greatest creativity was when it embraced its margins, or when these margins produced revolutionary movements, whereas the moments of its most telling revisionism was in its embrace of Eurocentrism.

In many ways, ECM is a moratorium of the limits that Marxism reached by the time of the New Communist Movement: it grasped these limits and briefly understood that some form of theoretical rupture – but one that also contained a continuity with struggle – was necessary. The capitalist triumphalism proclaimed by the ‘end of history’ discourse was unfortunately a triumphalism allowed by a movement unable to escape Eurocentrism. Thus, in the Afterword, Biel points towards movements that have happened since the collapse of that period: the Zapatistas, the Shining Path, the Naxalites. ‘The most recent situation,’ he argues, ‘writing in the 2010s, amply confirms what Maoism has always maintained: imperialism now turns the clock back to a situation of extreme militarism directed against the masses worldwide. […] The generalized, endemic level of struggle never ceases, and it still strongly encompasses the kind of forces we have been speaking of in this book: those marginalized not only just through racist oppression but in other, often superposed ways, particularly gender, and all the forms of super-exclusion characteristic of the globalization era – informality, various forms of indentured service, lack of status lack of papers.’ (200)

Such an Afterword, with a focus on struggle and an eye to the catastrophic limits of capitalism exacerbated by Eurocentrism, signals Biel’s analysis in The Entropy of Capitalism where the anti-revisionist ire is reclaimed in an attempt to provide a new layer of language to Marxist political economy.