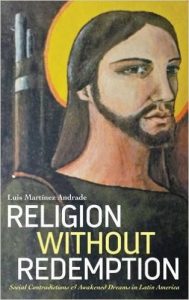 Anglo-American audiences have largely neglected Latin America political philosophy with many major works in liberation philosophy and theology are unavailable or difficult to access in English. (A major exception is Paulo Freire’s pedagogical writings which are very influential within progressive educational circles, though their roots in Brazilian peasant struggles often go under-remarked.) The translation of Luis Martínez Andrade’s Religion without Redemption (it appeared in Spanish in 2011) is a welcome addition to the field. It contributes to Latin American postcolonial studies, following theorists such as Walter Mignolo and Aníbal Quijano, and continues the tradition of liberation philosophy and liberation theology established by figures such as Enrique Dussel and Leonardo Boff.

The first part, ‘Entelechies and Cathedrals’ is a contribution toward a critical theory of global capitalism and neocolonialism. In the first chapter, ‘Civilising Paradigms and Colonial Atavisms,’ Martínez Andrade follows Immanuel Wallerstein and Dussel in seeing 1492 and the conquest of the Americas as the origin of modernity. With the conquest of America came a system of racial classifications linked to social, economic, and political domination and exploitation. Modernity was built on a racialized, global division of labor. European political and sociological thought advertised itself as a neutral, universal investigation into humanity, masking its role in legitimizing colonialism. Reason, progress, and development were mired in the extermination of indigenous peoples and their cultures and the rise of the transatlantic slave trade. Against this legacy, Martínez Andrade calls for the need to analyze the structural violence imposed by capitalism and to decolonize knowledge so that it can support popular struggles and the move toward participatory democracy.

Chapter Two, ‘The Shopping Mall as the Paradigmatic Figure of Neocolonial Discourse’ mobilizes Veblen’s account of conspicuous consumption, Bourdieu’s research on cultural capital, and Naomi Klein’s No Logo to analyze the shopping mall as a synecdoche for neocolonialism. Martínez Andrade follows Baudrillard in treating consumer society as a complex of signs and symbols with the shopping mall revealing a logic of geographical economic difference and imperial domination. Consumerism is promoted as a civilizing process – recalling the French and Portuguese ‘civilizing mission’ – but in fact functions as a form of domination and exclusion, domestically between elites and the people and internationally between countries and regions.

The first two chapters address the complex role of race in capitalism built on colonialism and racism’s legacy in Latin America. Martínez Andrade cites Frantz Fanon’s observation that in the colonies economic substructure is also the superstructure: the ruling class is not determined by its ownership of the means of the production, but rather it owns the means of production because of its racial membership in the colonial power that makes it the ruling class (54). Consumerism is driven by Western cultural and aesthetics where ideals of beauty determine power. He suggests the notion of ‘corporeal capital’ under which phenotypical characteristics define privilege and success. Racism and the efforts of elites to reproduce Western life promote segregation based on somatic and cultural markers across societies and also within colonial society where indigenous and popular culture is derided.

The second part, ‘Utopia and Liberation’ searches for resources for liberation, especially from radical theology. The most substantial essay, ‘The Principle of Hope’ is an extended meditation on Ernst Bloch and his influence on the liberation philosophers and theologians Leonardo Boff and Enrique Dussel. Bloch is a major influence on Latin American philosophy because of his stress of the importance of hunger and his meditations on how humans through their creativity, hope, and labor can bring about utopia. His exploration of religious and mystical traditions as a source for the utopian ideal provides a vital resource for liberation theologians who attempt to bridge Christianity and Marxism. Martínez Andrade mobilizes Bloch’s thought in the service of eco-socialism as a concrete utopia (69), particularly in the work of Leonard Boff and Enrique Dussel. The chapter ends with a series of Blochian reflections on political poems by the Nicaraguan priest Ernesto Cardenal and Brazilian Domincan friar Tito de Alencar Lima.

The fourth chapter, ‘The Gun Powder of the Dwarf: Unearthly Reflections on Contemporary Political Philosophy’ is a meditation on the first section of Walter Benjamin’s ‘Theses on the Philosophy of History’ filtered through the works of Slavoj Žižek, Enrique Dussel, and Leonardo Boff. Benjamin writes of a chess automaton in which people can play against a puppet controlled by a dwarf hidden underneath the table; the puppet, who is always supposed to win, corresponds to historical materialism, but does so with the services of the dwarf who corresponds to theology. Martínez Andrade contrasts how each author puts forward an account of the potential of theology to liberate, ultimately rejecting Žižek’s Leninist vanguardism and seeing Boff’s liberation theology as more closely identified with social movements than Dussel’s liberation philosophy.

The final chapter, ‘Tendencies and Latencies of Liberation Theology in the Twenty-First Century’ explores religious criticism of capitalism as a form of idolatry and secular theology that demands ‘the immolation of the poor’ (106) and inquires about the potential of liberation theology to continue to inform social movements. It includes discussion of criticisms of liberation theology from feminist and Indigenous theologians and defends its relevance today.

Martínez Andrade’s chapters range widely, engaging dozens of theorists and themes. In many places, more sustained reflection would help clarify the implications of his ideas. Many major questions and challenges remain largely unanswered. Two types of concerns are especially central, one regarding his critical analysis and the other regarding the place of liberation theology in progressive social movements.

The critical analysis offered is based on world systems theory with particular attention to the role of race in colonialism and on more recent criticisms of neoliberal economic policy (interpreted broadly as the Washington consensus). How far do these resources help in developing a critical political economy to understand and transform capitalism today? Martínez Andrade contends that the shopping mall is a ‘central object of discourse in the hegemonic colonial narrative.’ (55) But to what extent is the shopping mall the correct metaphor for today’s capitalism? On-line retailers such as Amazon and big-box stores such as Walmart with their complex global supply chains are arguably more appropriate exemplars. The shopping mall is no longer hegemonic in a globalized world where space-time has been fundamentally warped by ever accelerating capitalism. Today’s affluent youth visit shopping malls with their Smartphones to connect them to social media.

Another concern is that the criticisms of capitalism frequently come from biblical interpretation – capitalism is idolatrous, in need of prophetic denunciation, and ‘must be understood not only as a system of fetishised appearances, but also as a religion of daily life.’ (105) Though Martínez Andrade admits at the end of the book, ‘liberation theology no longer has the same intensity as before’, (120) he insists on its continued relevance. More is needed to explain why progressive social movements should find resources in radical Christian (originally Catholic) theology. Religion is a source of hope for much of the world’s impoverished, marginalized and oppressed people. When the state ignores or preys on its most vulnerable members, the churches, mosques, synagogues, and temples are often there with food, shelter, and a vision of social justice. Nonetheless, it is unclear that the major social movements in Latin America today are nourished by liberation theology.

Furthermore, what are people of other faiths and non-believers committed to social justice to make of liberation theology? The radical Christian imagination that privileges the perspective of the hungry and poor is still a Christian imagination. Martínez Andrade mentions the importance of liberation theologians engaging in intercultural dialogue with other religions: ‘an ecumenical dialogue is necessary to create a global ethos, an ethos that will not be complicit in cultural homogenization, or the imposition of a pattern of domination.’ (118) This seems right, but is it possible in practice? What role should faith have in revolutionary movements, especially under conditions of pluralism? How do we prevent faith from fomenting sectarianism?

These criticisms are meant as an invitation. If a political philosophy is rooted in local social movements and cultural practices, how can it be incorporated by people from different backgrounds? The problem of Eurocentrism is that it treats its philosophers as offering universal truths that in some cases legitimize domination. But once we acknowledge the need to reconstruct philosophy with voices from around the globe, where do we go? Religion without Redemption contributes to this important dialogue and offers many insights for how it may develop.