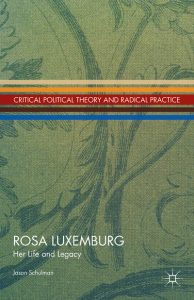 As Jason Schulman notes in Rosa Luxemburg: Her Life and Legacy, we are currently experiencing a ‘Luxemburg revival’ (2). In the Anglosphere, one has Verso’s publication of The Complete Works of Rosa Luxemburg, and in recent years, in the pages of The Guardian and The London Review of Books, Jacqueline Rose and Sheila Rowbotham have paid homage to Luxemburg’s cosmopolitanism. In the Schulman-edited Rosa Luxemburg, contributors revisit Luxemburg’s legacy to determine its lessons today. Critically, all contributors to Rosa Luxemburg are engaged in the highly synchronic exercise of explaining contemporary socialist theory and practice vis-à-vis Luxemburg. This book is no excavation of Luxemburg’s life-in-action: Luxemburg is an Ansatzpunkt for where the left has gone wrong and where it should go right. Surprisingly, Rosa Luxemburg does not detail Luxemburg’s relationship with feminist theory.

Rosa Luxemburg is essentially a reprint of a 2001-2 debate in New Politics, an American ‘“Luxemburgist”’ (5) periodical, with up-to-date follow-ups from Amber Frost, Chris Maisano, and Michael Hirsch. Prompted by eminent Luxemburg interlocutor Stephen Eric Bronner’s piece ‘Red Dreams and the New Millennium: Notes on the Legacy of Rosa Luxemburg’ (11-19), academics, writers and left-wing activists use his run-through of Luxemburgist praxis to pass comment on the state of the left. What is Bronner’s case? In an interview with Schulman that closes the book, he argues ‘[w]e should approach Luxemburg in roughly the same way that she approached Marx: appreciative, critical’ (186). In other words, there is that which leftists can leave or take with regard to Luxemburg. What is to be appropriated is fairly standard stuff for those already attracted to her radical, libertarian socialism. For Bronner, Luxemburg was an enthusiast about democracy, at home with the type of non-hierarchical street politics witnessed at the fall of the Berlin Wall and in the Arab Spring (187). She rejected the strictures of authoritarian party rule, be that of a Leninist or Social Democratic variety. Bronner casts Luxemburg in many ways as a better revisionist than Eduard Bernstein (14-15). Luxemburg understood that reforms, a constant, rolling set of changes carried out by committed socialists, would be revolutionary if allowed to flourish, empowering those carrying them out. She was a practically-minded republican, aware that reforms carried out to curtail the power of the bosses and to grant workers their freedom must be accompanied by a constitutional settlement, with ‘liberal’ safeguards ensuring that rulers could not abuse any temporary revolutionary preeminence. And, for Bronner, like her mentor Marx, Luxemburg was profoundly aware that the capitalist mode of production paid scant regard to borders. Nationalism was and is an imperialist imposition, a means to divide and rule. Thus, to Bronner, Luxemburg would have little patience with flag-waving, country-first solutions to war or maldistribution in the present.

As for what should be dropped from any reappropriation of Luxemburg, one has to mark Rosa’s early 20th century, Mitteleuropa context. Bronner highlights the antediluvian commitment to history’s inexorable progress towards socialism, and away from barbarism, underpinning Luxemburg’s ‘outmoded teleology’ (12). Moreover, Luxemburg’s unconditional confidence in class-based organisation is inadequate: capitalism is too complex a sociological and ideological beast for anyone to give credence to the notion of two class armies facing one another now; a scenario conceivable in the demographic heyday of 1900s German Social Democracy. Relying on Luxemburg’s somewhat chiliastic rhetoric is, therefore, meaningless to Bronner: ‘[t]he issue is no longer “capitalism” in the abstract, or the future erection of “socialism,” but the pressing need for a response to neoliberal elites intent upon rolling back the gains made by the labor movement’ (17).

Bronner’s position on Luxemburg, and his advice for the left, is partly radical, partly moderate. Bronner, channeling Luxemburg, is interested in creating transformative agents of change; he and Luxemburg are not concerned with either letting history judge or prodding bankrupt political parties’ elites into suddenly remembering their working-class moral mission. Furthermore, tropes of national renewal or conservative appeals to class unity are to be eschewed. The moderate tag is because the movement is everything, the goal nothing, to the extent that modern socialism is, for Bronner-Luxemburg, a question of reenergising basically decent state-sponsored institutions to reign back unfettered neoliberal forces. ‘The debate,’ claims Bronner, ‘is no longer between revolution and reform … but between those who support the reforms traditionally associated with social democracy and those who do not … the value of a reform does not lie with who proposes it, but whom it benefits’ (136-37).

To Bronner’s critics in Rosa Luxemburg, the main bone of contention is the moderate element of Bronner’s deliberations. Is his argument an apology for the liberal democratic, late capitalist status quo? In respect of reanimating past Social Democrats, is Bronner reviving Bernstein rather than Red Rosa? To Alan Johnson (21-37), David Camfield (39-47) and Barry Finger (99-118), Bronner is a Marxist turncoat. In his call for existing institutions to enact socialist policy, Bronner ignores their capitalist character. He negates the legacy of direct democratic institutions such as the workers’ councils of revolutionary Russia and Germany in favour of established instruments of class oppression such as national governments. And in describing proletarian identity as confused and crumbling, Bronner nominally makes it so. Bronner, as is the case with Laclau and Mouffe’s vision of radical democracy (22-3), denies the integrity of Marxist theory’s core concepts. Out of his respondents, Michael J. Thompson’s reply (85-97) is far more sympathetic to Bronner, siding with him in his sidelining of the spectral, socialist other of ‘archaic, vestigial’ (88) workers councils and in his pro-existing institutional leanings.

Bronner’s retorts to the ‘radicals’ (49-71; 119-40) are pointed restatements of his position. Far from being non-Marxist tout court, his is a quite materialist concern with achieving goals by exploiting and cultivating the suppressed elements in a rigid neoliberal order. Instead of treating the institutional arrangement of socialism or worker rule as historical states, one should be ‘a bit more modest’ (63) and argue for the achievement of socialism presently, in the form of positive legislation or executive oversight, even if this seems a little less red in tooth and claw than is palatable for the ultra-left. ‘It’s time’, writes Bronner, ‘to understand the difference between demanding utopia and reinventing an idea of what is feasible, but ignored under existing circumstances’ (138).

Bringing the debate up-to-date, Frost (141-50), Maisano (151-66), and Hirsch (167-84) make reference to Syriza and Occupy. Maisano highlights the dynamic Luxemburg, someone who could have reckoned with the tensions in Occupy between decentralization and centralization, between spontaneity and organisation. For Hirsch, Luxemburg’s arguments contra populist Social Democrats leaders Friedrich Ebert and Gustav Noske challenge so-called realistic, state-centric socialism. Hirsch also underlines ‘the implications’ of capitalism, its diffuse presence in our ‘social order’ (172).

There is a familiarity about Rosa Luxemburg’s back and forth. It is a well-rehearsed problematic. In his reflection on the debate, Maisano sees ‘Bronner and Michael Thompson arguing for … the potentially liberatory qualities of the republican state and gradualist programs of radical reforms’ (155) and the rest, Johnson, Camfield, Paul Le Blanc (73-83) and Finger, ‘defending a revolutionary councilist tradition that seeks to overthrow the republican state’ (156). The question is: should the potentially liberal democratic best of bourgeois society be grasped with Luxemburgist vigour, to the detriment of the base interests of the ruling classes, or should socialists adopt alternative forms of class resistance inside capitalism? Within the parameters of such a question, particularly if Bronner’s self-proclaimed Luxemburg-inspired Western Marxist credentials (56) are taken as a litmus test, the best that can be said for Bronner’s Luxemburgist stance is its acceptance of the contingent and subjective in Marxist theory; in other words, articulating an ethico-political, creative dimension to revolutionary work. The worst is an atemporal, uncritical acceptable of the viral nature of capitalist norms, present and profuse in all our social arrangements, be they political or civil.

Concerning Rosa Luxemburg in general, Frost makes perhaps the most salient point when she cites ‘Freud’s “narcissism of minor differences”’ line (143). Le Blanc, too, contends ‘[i]t seems to me that comrades are – to a certain extent – arguing past each another’ (75). Rosa Luxemburg does have isolated moments of real debate: was Luxemburg, in the heady days of the Russian and German Revolutions, a republican, supporting national parliaments or a council communist (53-4)? Overall, though, the book is another rehearsal of ‘means and ends’ (190) in socialist discourse; SYRIZA’s actions in government are a quite topical example at this conjuncture. Reading Rosa Luxemburg, there does not appear to be any alternative to reform or revolution, to a situation in which any proposed measure, lofty appeal to strategy or contextual tactic cannot be assailed by a counterblast emanating from a reformist or revolutionary standpoint, often alternately over the course of an exchange by either ‘side’. Bronner’s position, for example, from a revolutionary perspective, is both fallible and emboldening. In his failure to acknowledge that capitalism’s liberal concessions – the interventionist welfare state; humanitarian transnational bodies – are, in fact its greatest ideological enablers, Bronner seems decidedly old-fashioned, and yet in his revolutionary treatment of reforms, that one should follow the radical logical consequences of reform to political self-mastery, he appears the critical materialist he wishes to be.

In short, as alluded to in the newer chapters, perhaps it is a question of dealing with reform and revolution immanently, mediated through certain immediate decisions that activists face, supporting either the democratic, pluralist impetuses of the radical European left, or attempting to engender egalitarian public policy within the framework of the welfare state and trade unions. Whether Luxemburg does or does not correspond with one’s leaning is thought-provoking but immaterial. As the context of the early 21st century passes, and Syriza, Occupy and the crisis of representational democracy become totemic, reform or revolution are recast in particular formations that Luxemburg can be employed to support or defend.