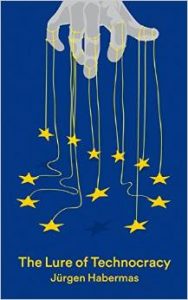 Jűrgen Habermas
The Lure of Technocracy

The Eurozone is a Humpty Dumpty teetering on a tightrope over an abyss. This is the nightmare one may have upon reading Habermas’s The Lure of Technocracy. However, Habermas does not want to leave us tossing and turning in fear of another world catastrophe that might toss us into the abyss and leave Europe in ashes once again; he offers us a plan for remedying the current troubles in the Eurozone. However, Habermas’s plan, to those who know of Habermas and of his philosophical ancestry in the Frankfurt School and the Critical Theory of Adorno, Horkheimer, and Marcuse, is one we could have well expected. His unsurprising remedies are: having the UK as a full and committed member of the EU; moving away from the dictatorship of an oligarchy of administrative managers and political appointees towards a trans-European democracy; understanding democracy not merely as the use of polls but also including a reasoned discussion among a trans-European citizenry along the lines of Habermas’s own discourse theory of rational discussion; solidifying the economic base of Europe by having a more equitable distribution of the wealth, resources, and social benefits; and, most importantly for Habermas, attaining among the European citizenry a sense of trans-national solidarity.

These remedies are well reviewed in the various essays in the first two parts of Habermas’s book, and have been made more accessible to a wide public in the interview “The Next-Step ” (63ff). However, the essays in “Part III: German Jews, Germans and Jews”, may throw the reader for a loop. This part of the book might seem to the reader as just an add-on to make up for a shortfall in the page count. Habermas seems to be aware of Part III’s appearance as tacked on when, in the “Preface to the English Edition”, he says: “The essay on Heinrich Heine also revisits the European theme of the two preceding parts of the volume” (vii).

However, I think there is a very deep and surprising connection in the text of the third part of the book to the text in the first two parts of the book. The surprise is actually twofold, as is the depth: Firstly, in talking about the German Jewish academic “returnees” who escaped from the Nazi regime mainly to England and the USA, and then returned to Germany after the defeat of the Nazis, Habermas shows how liberal, modern, and critical thinking was returned to Germany along with the “exiles” (or, better put, escapees). The surprising aspect of this theory is that if the escapees had not returned, Germany would have been left to the wiles of the obscurantist thinking of Heidegger and Heidegger’s apologists, according to Habermas. The deep and virtually hidden aspect of this theory is this: The Nazi hatred of the cosmopolitanism and trans-nationalism of the liberal, modern and critical thinkers, and especially that of the German Jewish intellectuals, could have resulted in the cultural genocide of liberalism, modernity, and critical thinking, including the very idea of a cosmopolitan Europe. Secondly, the surprising aspect of Habermas’s interpretation of Buber’s influential I-Thou/I-It coordinate system for how humans can relate to each other and to a transcendent reality, is that Buber provides a proto-theory of performative discourse. The deep aspect of Habermas’s novel interpretation of performative discourse or speech acts lies in the implication that Buber’s theory as a proto-theory for Habermas, provided the framework for a more complete theory of rational communicative discourse.

These two surprising and deep aspects of the apparent tack-on of Part III in this selection of essays, turn out to be integral to the previous two parts, namely on how to save the Eurozone from turning into another field of ashes and ruins. The essays in Part III are also integral to how Habermas sees his own intellectual ancestry in the thinking of Jewish German intellectuals who became refugees from Nazi Germany. A good place to start in order to understand Part III, and indeed the entire book, as Habermas hints to the readers of the Preface, would be the final chapter, “Our Contemporary Heine: ‘There are No Longer Nations in Europe’”. So, I suggest looking at Chapter 10, Habermas’s final chapter, as an overarching textual framework.

In Chapter 10, Habermas makes the connection of his discussion in Part III of German Jewish intellectuals to the discussion of his concerns about the Eurozone and his own political and social philosophy in Parts I and II; “the best traditions had been cultivated by Jewish emigres in exile. And those who returned had Heine in their luggage” (139). Heine, according to Habermas, became part of the intellectual heritage of German Jews, along with Spinoza and Lessing. Their theories were put into a form of intellectual exile during the Nazi era, and was brought back to Germany by the Jewish German thinkers who returned after having escaped the Nazis. It was these historical figures, important for the development of the German Enlightenment, whose books were torched by the Nazis, and who became part of the intellectual ancestry of Habermas’s teachers in Frankfurt after they were invited back to Germany to rebuild the liberal, modern, and critical aspects of the German intellectual tradition. Spinoza, Heine and Lessing became important to Habermas during his tutelage in Frankfurt. Therefore, Habermas’s discussion of Heine and Heine’s importance to the returnees, especially for Habermas’s own teachers, reveals that the historical roots of Habermas’s discussion in the first two parts of the book were formed by the thinkers discussed favourably by Heine. Moreover, in Chapter 8, “Jewish Philosophers and Sociologists as Returnees in the Early Federal Republic of Germany: A Recollection” (105ff), Habermas discusses the influence of German Jewish thinkers who returned only as visitors, such as Arendt and Marcuse, and those who were victims of the Holocaust, such as Benjamin.

All in all, I think Habermas’s main point about German Jewish intellectuals, historical German Jewish figures, returnees, visitors, and victims of the Holocaust, is that the thought of these intellectuals became integrated into both the German Enlightenment and the thought of modern, liberal, and critical German thinkers. Habermas wraps up his assessment of this connection in these concise terms: “Jews have exhibited such an incomparable creativity in German philosophy since the days of Moses Mendelssohn that the proportional contributions of both sides [the German Enlightenment thinkers, on one side, and the Jewish thinkers who were influenced by and contributed to the Enlightenment, on the other side] to the objective mind are inseparably fused” (106).

At an even more fundamental level for Habermas’s own philosophical development, the original thought of Buber, as interpreted and transformed by Habermas in Chapter 9, became the material from which Habermas carved out his innovative and humanistic theory of discourse as communication among rational agents. Habermas presents, through his own unique perspective, Buber’s original thought. He transforms Buber’s idea about the dialogical relationships among humans, and between humans and objects, and humans and a transcendent reality. These theories for Buber are about the existential conditions of humanity. Habermas uses his theory of discourse to transform Buber’s theories about these existential conditions of humanity into a speech act theory or performative theory of language: a theory of how to rationally communicate or carry on discussions with each other.

After reading and attending to Habermas’s discussion of Buber, we can turn to Chapter 3, “Keywords on a Discourse Theory of Law and of the Democratic Constitutional State” (46ff), for an overview of Habermas’s discussion of his discourse theory. According to the theory, we need broad, even universal, discussion, of political issues where political decisions are made, if we want the decisions to be made democratically. Hence, so-called national sovereignty must be transcended through discourse among rational agents, especially in the Eurozone. This theory of discourse informs Habermas’s discussions of solidarity among its citizenry in Chapter 1 and 2, where he discusses democracy as transnationalizing in the Eurozone. These three chapters complete Part I. However, in Part II, the interview in Chapter 4 covers much of what Habermas states in Part I, but in a form accessible to a wide public, and so, attempts to apply Habermas’s ideal of achieving a universalized, or at least, an increasingly broad discourse among Europeans. The next three chapters in Part II deal with the various crises in the Eurozone from the perspective of the liberal, modern, and critical approach that infuses Habermas’s political, social, and critical theory, especially Habermas’s transformation of Buber’s dialogical philosophy into Habermas’s theory of discourse. Chapter 5 deals with the problem of political parties either widening the base of democracy in the Eurozone, or relying on technocrats, Chapter 6 deals with putting Europe and the Eurozone above nationality or nationalism, and Chapter 7 deals with the conflict between increasing both equity and democracy, on one side, and the other side the current tendency within capitalism to concentrate wealth and influence to fewer and larger corporations and banks.

Is Habermas too much of an idealist in expecting nationalism to wither away and to be replaced by a democratic Eurozone citenzry? If yes, the explanation for Habermas’s idealism lies in Habermas’s memory of a lecture he heard given by an elderly Buber.

Here is Habermas’s memory of the occasion of Buber’s lecture in Bonn that he attended as a young student: “The entire auditorium rose to its feet in reverence when the President of Germany, Theodor Heuss, as if to underline the extraordinary nature of the visit, solemnly escorted the comparatively small figure of the white-haired and bearded old man, the sage from Israel, on the long passage past the row of windows to the podium” (121). The continuation of this quote reveals Habermas’s own self-image and how he wants to be remembered: “This was how we had imagined the Old Testament prophets as children. In memory the entire evening contracts into this single dignified moment” (121-2).

This book reveals subliminally that Habermas wants to be remembered as the white-haired prophet of a Eurozone emancipated from ethnic hatreds where the citizenry of the new democratic Europe share equitably in political decisions, power, and wealth.