Marx & Philosophy Review of BooksReviews‘Crucible of Resistance: Greece, the Eurozone and the World Economic Crisis’ reviewed by Bill Jefferies 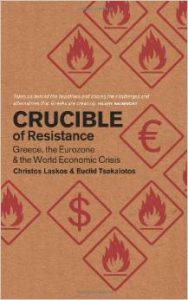 Christos Laskos and Euclid Tsakalotos
Crucible of Resistance: Greece, the Eurozone and the World Economic Crisis

Euclid Tsakalotos is the recently installed Greek Finance Minister who just four days after appointment drafted the Syriza government’s tout court acceptance of the Troika’s bail out terms. How did this neo-Marxist economics professor accept austerity just five days after it had been so overwhelmingly rejected in the referendum?

The Crucible of Resistance written in 2013 with Christos Laskos provides some clues. It explains the political method of the Syriza establishment through an analysis and description of the impact of austerity on Greece since 2008. In the Acknowledgements the authors explain that the ideas presented in the book have been tested over five years during the creation and then consolidation of Syriza. The book makes “four interrelated arguments” first, that Greece is not a special case; second, that this is a “crisis of a particular neoliberal political settlement”; third, as a result “the space for responding to demands and aspirations from below seems to have drastically narrowed even compared to the period of neoliberal hegemony before the crisis”; and fourth, “thus, we might be moving either in the direction of a far more authoritarian capitalist settlement, or to a long period of transcendence of some of the essential features of capitalism” (1-2). This may be code for socialism, but its meaning is not clarified in the text. The book claims that the “methodological commitments in the book challenge all these elements of cognitive locking – an essential prerequisite, we feel, for exploring a different exit from the crisis.” (11) “Ideas” the authors claim “matter” (11) as “ideas are also crucial to the formation of social coalitions and the institutions and politics that such coalitions promote” (12). This emphasis on ideas, the attempt to promote a “rational” answer to the crisis, is supported by “Polanyi’s critique of the economistic fallacy, namely that the rasion d’etre of all action and all institutions is basically economic in nature, has lost none of its moral and analytical force” (13). If institutions and actions are not basically economic in nature then they can be convinced of the rational power of ideas.

The authors challenge the idea that “Greece’s woes” stem from an incomplete modernization” instead they situate these woes in the context of the “evolving crisis of the Eurozone” (16). The collaboration of Greek parties in the rule of the Greek state led to a “process of convergence of centre-left and centre-right parties with respect to economics” that has been accompanied by the rise of “cartel parties” (26). The day before presenting acceptance of the austerity package to the Troika, Syriza briefed the opposition parties to ensure their support for their economic proposals.

Greek GDP amounts to just 2% of the EU total. The authors maintain that the crisis of 2008 was not overcome quickly due to the weight of debt in the Western economies. They view the relative stagnation of the EU economies as a crisis that calls into question the “viability” of “the neo-liberal economic and social order as a whole” (57). Neo-liberalism was a response to the end of the post-war boom. The authors do not think that profit rates have recovered with globalisation, but has been characterised by the growth of finance and the liberalization of trade. The growth of manufacturing was genuinely important in the developing world, but “did not translate into an equally impressive rise in industrial employment” as not everyone could export, much of this new production was import substitution and productivity rose (64). The authors take no account of the growth of China or indeed the employment of 150 million Chinese industrial workers. There is no consideration of the growth of the world market with the transition of central planning to capitalism during the 1990s. There has been a growth in social inequality and a retreat from democracy. This provided the context for the 2008 credit crunch which was particularly severe in Europe due to macroeconomic imbalances between northern and southern Europe. This led to an emphasis on neoliberal reform based on a “class instinct hypothesis”. But the authors ask “what of the level of rationality implied by this hypothesis?”(89). Had the rulers realised the consequences of their policies? Alternative paths were available for the ruling class but there was a “lack of plasticity in the system”. This was most likely a product of “class instinct” even if “the rationality of the elite response” was similarly uncertain.

The authors attribute the severity of the crisis in Greece and the “brutal and unrelenting austerity” that resulted from it as a “warning to other economies to take ‘appropriate’ measures on their own in good time” (104). The “economic results were abysmal, leading to year after year of recessions, rising unemployment and a vicious cycle of austerity-recession-more austerity” (104). The most rational explanation for this may be one of “class instinct” on “behalf of the elites” but this rational explanation has led to “irrational and unforeseen outcomes – not least because of an underestimation of the strength of the opposition” (112). But who was underestimating who?

The authors provide a summary from an insider’s point of view of the anti-austerity movement and in particular the rise of the Coalition of the Radical Left or Syriza and discuss the way forward for the movement. They reject the view of the Left Nationalist wing of Syriza represented by Costas Lapavitsas of SOAS that Grexit was necessary and inevitable as “why should ‘main powers’ accept major losses from a fundamental restructuring of debt at the EU level?” (133) The authors do not know “what to make of the argument” that “no capitalist class would systematically aim at raising the wages of its own workers since it would then be ruined by competition” (133). Instead the authors defend the majority view of Syriza of opposing both austerity and exit from the Euro as “Syriza had argued from the beginning that it was extremely difficult for Greece to be thrown out of the Eurozone because a Grexit would soon lead to expectations of other departures” (134). They think that this likelihood gives “enhanced credibility to Syriza’s call for an international conference to provide a more just, and economically more effective solution to the problem for Greek debt” (135). Socialist policies were not part of the immediate strategy rather “supporters of the exit strategy gave great weight to developing the immediate political platform which would be able to radicalize the Greek population and prepare them for the implementation of that platform” (142). Strategy needed to build on the experience of the feminist, anti-racist and other movements, the state is not the “locus of all activity for social transformation” (143). This was changing the world without taking power. The authors “sought to challenge traditional leftist politics by claiming that a programme of the Left never fully pre-exists independently of the movement” (144). How paradoxical that the programme of the right is now the programme of the left.

The Crucible of Resistance is all the more interesting and pertinent with the rise of Syriza to government if not to power. The programme of the Syriza majority, so well outlined here by Christos Laskos and Euclid Tsakalotos – the attempt to convince Europe’s rulers of the irrationality of their austerity measures has failed – what would Polyani make of that?