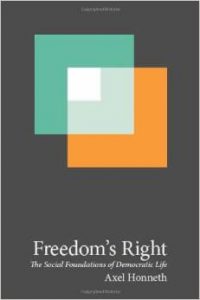 Elvira Basevich is a Philosophy PhD candidate at The Graduate Center, CUNY. She specializes in …

Axel Honneth in his latest book, Freedom’s Right: The Social Foundations of Democratic Life attempts to install G.W.F. Hegel’s model of ethical life, which he expounds in the Philosophy of Right, as a foundation for normative political theory. To his credit, Honneth rejects recent trends in normative political theory that ignore Hegel’s political philosophy, which wrestles with the critical issue of how to reconcile the legitimate claim of individual autonomy with social and political institutions that both make possible and potentially distort individual autonomy. In Freedom’s Right, Honneth emphasizes the institutional background conditions for the formation of social relations. He specifically highlights the family, civil society, and the modern constitutional state as institutions that furnish the conditions of individual freedom, as well as individual identity and development. Borrowing this tripartite institutional framework from Hegel’s Philosophy of Right, he hopes to establish a model of ‘social freedom’ that combines the former with his brand of the ethics of recognition.

What is his brand of ethics of recognition? Rather than focusing on the master/slave dialectic as the site for the development of free social relations – a refreshing departure from most Hegelian-inspired critical theorists – Honneth resituates the struggle for recognition within particular institutional contexts that are each informed by distinct sets of norms and values, and motivated by basic psycho-social needs: the need for love, respect, and esteem. Each institutional context constitutes “a normatively integrated sphere of action” that promotes the satisfaction of these needs, that is, the functioning of the institutions of modern ethical life are not wholly instrumental, but also communicative insofar as individuals work cooperatively for the mutual satisfaction of their needs (3). Honneth maintains that participation in social practices also serves to legitimate them. Otherwise, the social theorist puts herself in the undesirable position of condemning meaningful social practices as instances of ‘false consciousness.’

In his exposition of the tripartite institutional framework that characterizes modern ethical life, Honneth begins with the family. The family allows us to experience intimacy, which, in turn, helps us form an integrated sense of self, arising from being the subject of someone else’s unconditional love. (Here, by way of object-relations theory, Honneth fails to update sufficiently Hegel’s bourgeois conception of the family, as he offers some unfortunate musings on the especially significant role of a mother’s love in childhood development.) The modern constitutional state’s protection of civil and political rights forms the basis of our self-respect. The opportunity to partake in the democratic will formation of one’s polity is also integral to one’s self-respect. Finally, civil society also comprises an institutional aspect of social freedom that ideally bolsters our self-esteem, for even with the marked exacerbation of inequality in income and wealth, the decimation of unions and the public sector, the hyper-exploitative practices of transnational corporations and of the financial sector, Honneth nonetheless holds that civil society is an ethically integrated sphere of cooperation, informed by an implicit – and yet robust – set of norms and values that participants in civil society mutually recognize. He defends the “moral economism” of civil society on the basis of ‘tacit’ or ‘implicit’ pre-market moral imperatives and relations of solidarity (195).

His moralistic interpretation of civil society is perhaps the most untenable thesis Honneth advances. It also indicates the extent to which he parts ways with the Frankfurt School tradition that emphasizes the deformation of subjectivity in modern market societies, rather than the latter’s implicit moral integrity that individuals somehow tacitly acknowledge. One could advance a charitable reading of his account of civil society by stressing that, vis-à-vis Hegel, Honneth aims to deliver a conception of justice and emancipatory politics that attempts to make sense of the manner in which people make meaning out of the social relations and practices in which they participate, while nonetheless positing a certain ideal form of recognition that ought to be actualized in particular institutional contexts. With this claim in mind, Honneth hopes to illustrate that civil society realizes the moral imperative of mutual recognition, rather than solely mutual exploitation and instrumentalization.

Although he believes himself to be expanding on Hegel’s account of civil society, he seriously misunderstands it. For Hegel, the ethical integrity of civil society is not based “in feelings of solidarity” expressed by burghers (181 my emphasis). Rather, the ethical integrity of civil society is subject to political contestation, inasmuch as the institutional mechanisms that originate from within the state – which Hegel identifies as ‘corporations’ and ‘police’ – must struggle to contain the inherently destructive forces of modern market economies. Countenancing the state and state-supported institutions as bulwarks against the social disintegration to which civil society invariably lends itself is the only feasible option for vindicating Hegel’s claim that civil society has ethical integrity. But even this option, Hegel scholars largely agree, requires careful rethinking, since Hegel failed to anticipate the chaos capitalist markets unleash and the manner in which they generate a ‘rabble.’ Hegel, however, contended that the market by design caters to the satisfaction of individuals’ idiosyncratic and selfish interests. It is on this basis, one that is distinctively selfish, that it expresses an aspect of modern individual freedom. The issue of ethical integrity is a matter for the state and state-supported institutional mechanisms. In other words, Hegel never entertained the idea that competition was also covertly cooperation – a vision Honneth naively conjures up in portraying civil society as an aspect of social freedom. Thus, positing ‘feelings’ of solidarity as the normative basis for securing the ethical integrity of civil society is untenable.

Consider how this sanguine moral outlook on civil society colors his interpretation of the establishment of the wage contract:

[F]ar beyond the instrumental dimension of these contracts, which consist in the mutual agreement to exchange services, each contract tacitly implies the normative demand that each side commit to the obligations stemming from the generally accepted value system in society. For workers, this second, implicit component means that they not only have a claim to symbolic recognition within the company, but can also count on undertaking ‘worthwhile’ activity. And for the entrepreneur, the moral element of the labour contract means they can legitimately expect loyalty and responsibility from the workers. Therefore, […] the labour contract entails much more than what has been put in writing; both sides commit to follow norms that determine, from outside the market, what it means to treat each other in a fair and just manner. (188)

On the contrary, Hegel and Marx assert that what it means to treat each other in a fair and just manner in the institutional context of civil society is precisely subject to political struggle, not a presupposition whose normative content is already clear or actual.

Rather than argue in favor of moral economism, one could just as soon concede that market relations are embedded in ethically differentiated forms of life that are nonetheless imbricated with a distinctive capitalist framework that shapes values, the material distribution of goods and resources, and social relations – a position Marx sketches in the Grundrisse. Thus, one might grant that there is “an antecedent class of non-contractual” rules that ground the economic market, without also granting that they are “moral” or serve the interest of justice and fairness. (181) Honneth does not entertain this possibility.

By way of concluding, I would like to comment briefly on the delicate issue of how to combine the insights of transcendental idealism with an empirically-informed social theory, an issue that greatly concerns Honneth. He maintains that normative political theory that does not accommodate the free market is insufficiently tethered to social reality, such that it cannot be normatively gripping on actual political actors. He thus hopes to avoid the ‘thick’ normative theorizing that stipulates principles of justice; both Rawls’s theory of justice and varieties of Marxism that seek to deconstruct the free market and the wage-contract such that the emergence of the ‘rabble’ and marked economic inequality become impossible fall into this category for him. But, perhaps this variety of idealism is more tenable than one that posits a secret moral core to civil society?