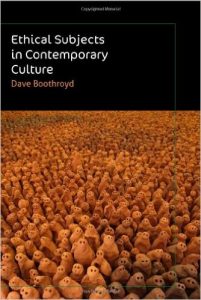 One of the most pressing problems facing academia today is how to engage with wider culture. Academic discussions can be so wrapped up in their internal discourses as to completely fail to engage anything outside, or when trying to make philosophical ideas relevant the depth of serious analysis may be lost. However, Ethical Subjects in Contemporary Culture adeptly combines the close reading of key thinkers in Continental philosophy with emblematic issues in current culture thus providing a useful resource for academics trying to grasp how philosophical ideas could engage with current ethical and political problems.

Dave Boothroyd, Professor of Media and Culture at the University of Lincoln, proposes that the problem underlying contemporary ethical problems is the experience of the subject. Indeed his definition of the subject is not one of a particular entity but as that which experiences the world. Appealing to experience fits well with phenomenology and throughout the book he uncovers the experiential nature of concrete cases that do not at first appear to be questions of experience. Effectively the book is split into two parts: the first four chapters are primarily expositions of the ethical aspects of selected continental thinkers; while the remaining six chapters focus on particular cultural issues which are illuminated by the nature subjectivity.

Chapter 1 serves as an introduction, and chapter 2 begins with Levinas and his ethical reinterpretation of phenomenology, which is characterised by the relation to the Other. Boothroyd claims that the ethical relationship to the Other is in fact based on ‘the Same’ (5), in spite of Levinas’s persistent identification of the Other with alterity or difference. While the basis for this reading is not made immediately clear, it does present a substantial critical contribution to his conception of alterity. This is revealed in chapter 8, when Levinas’s approach to ethics is described as same relative to Nietzsche’s attitude to otherness. This is, however, not a strong enough reason to justify the use of sameness and it would be more accurate to describe the relation to the Other not through the ‘same’ but as an ‘inside edge’, ‘included as excluded’ or some other equivalent. The importance of relating to the Other is the basic idea that Boothroyd takes from Levinas, which is retained throughout the book. The relationship to the Other is refined in chapters 3 and 4 through examining Irigaray’s ‘sexing’ of the Other and Bataille’s account of suffering in the flesh. The main point highlighted in Irigaray is not her feminism but the emphasis she places on the skin in the subject’s experience: the subject not as a unified entity but as embodied as differing within itself. This highlights the role of the skin in Levinas’s thought as the medium of relationship.

The second half of the book, beginning with chapter 5, depends upon deeper detailed discussions of particular examples and uses philosophical theory to draw out nuances in these cases. In contrast the first four chapters are more focused on expositions of the ideas of particular theorists. The ‘Gemotion’ 3-D touch screen designed by Yoichiro Kawaguchi is given as an example of technology trying to recreate touch (89-90). By analysing such technological uses, the opposition of technological and non-technological is rejected as a false dilemma. Instead, technology is merely a different kind of mediation through touch. The technological replications of touch should not be evaluated by how closely they replicate ‘natural’ touch because there is no type of touch that exists before the modification of human acts. The act of touching forgets itself because touching itself can never be touched. This means that there is no original touch unaffected by the artificial world, with the consequence that technology should not try to replicate natural sensation but embrace the artificial touch as a different kind of ‘world’ for the subject. The central aspect drawn out of tactile experience is the rejection of the separation between technological and non-technological. This principle is taken, pre-eminently, from Derrida’s account of deconstruction and is the core to Boothroyd’s understanding of ethics: the rejection of the separation of binary distinctions.

The issue of privacy and security has a strong popular resonance, whether for concerns about cyber security, privacy of personal data or governments’ demands to monitor electronic communications of ‘terrorist activity’. This is the topic of chapter 6, in which the tension between the secret and disclosure is explored through the impact of WikiLeaks (he only discusses Chelsea Manning as Edward Snowdon’s disclosures emerged only after the book’s publication). The ethical significance of WikiLeaks lies in disclosing the nature of the secret. The fact that something can be recorded even if it is encrypted or otherwise securely stored is also the condition that makes it possible to disclose such information (109). While this point draws heavily on Derrida, Boothroyd distinguishes his position by asserting that it is in the nature of communicating and recording to be capable of becoming public; whereas Derrida appeals to an absolute secret that could never be disclosed (111-12). The ethical significance of this deconstruction of secrecy is to reject the characterisation of secrecy or disclosure as in itself a moral or immoral act. Instead the ambiguity within the nature of the secret should shift the focus onto the political implications of the content of a disclosure rather than analysing the ethics of the act of disclosure (121-2). This point could have significant implications for the secure communications industry, but in the midst of a book on continental philosophy it is unlikely to reach a wider audience (although Boothroyd admits this is outside of his scope as an academic writer (18-21)). Perhaps if the more issue-focused style had been adopted from the start then Ethical Subjects in Contemporary Culture would have been more able to attract a wider audience.

The question of censorship is the topic of chapter 7, which focuses on the rise and fall of the Swedish film censorship board (the SBB). It is argued censorship should not be conceived as an artificial addition to the natural intentions of the producer of the work. Instead any work is already affected by the limits contained within its medium so, for example, a film is already limited by what the camera chooses to film and what it does not (133-4). The discussion of film censorship leads to the general claim that the law is not an absolute foundation but instead a performative act,s i.e. something that creates its own foundations. The significance of this ontological discussion of the law for ethics is that it undermines the treatment of law as a ‘narrow code-oriented way of thinking’ (142).

Suffering is one of the most prominent topics within the field of ethics and the contribution offered in chapter 8 does not repeat the commonplace approaches to the problem of suffering. Indeed the examples given of suffering are not emotive literary depictions but instantiations of the peculiar presentations of suffering within our culture: for example, in YouTube videos of traffic accidents or the style of charity appeals (146-7). Instead this chapter is built upon the contrasting approaches to suffering found in Nietzsche and Levinas. They share a deep recognition of suffering in people but whereas Nietzsche discards the significance of suffering in the herd, Levinas depicts suffering through an infinite duty. The sameness of the Other arises from Derrida’s objection against Levinas that his conception of the Other is not absolutely Other but part of the same (152). Boothroyd concludes that Nietzsche’s attitude towards suffering appears to be unable to reconcile particular cases of suffering with general culture, yet Levinas’s notion of infinite duty has greater potential to synthesize the two.

The discussion of hospitality, friendship and justice in chapter 9 and the discussion of death in chapter 10 confirms the predominant influence of Derrida. Boothroyd’s reading of hospitality follows Derrida insofar as it is essentially ambiguous, which renders unsuitable attempts to resolve hospitality into any axiomatic imperative. The final chapter on death has a relevant personal significance for Boothroyd as he intertwines the discussion of death with the death of his father and the act of writing a text that inevitably creates distance between the author and reader. The subjective angle of this chapter, which is similar to the autobiographical and personal style taken in some texts of deconstruction (perhaps the foremost example being Derrida’s ‘Circumfession’). This chapter would be more difficult to read for readers inexperienced in deconstruction but this challenge is well compensated by the persistent clarity and readability throughout the preceding parts of the book. Nevertheless the discussion of death is crucial for the definition of ethics Boothroyd espouses. In fact appropriately approaching death means to realise ‘ethics itself’ (191). This refers to the impossibility of experiencing death prominently developed by Heidegger and then given a Derridean twist. Likewise the significance of the question of ethics for Boothroyd is in the impossibility of the final ethical act but, in the same way that death cannot be avoided, so too ethical challenges must be faced.

The overall presentation of ethics that Boothroyd gives is dominated by Derrida’s exposition of deconstruction. However, there is also a strong flavour of Levinas’s ethical duty towards the Other, albeit through his appeal to the ethics of the same, which heavily resonates with the Derridean critique of Levinas. His central claim is that ethical problems should not be approached by trying to resolve a binary distinction, which is intimately dependent on Derrida’s thought. Overall this is a eloquent discussion of both theory and culture which shows the pertinence of deconstructed subjectivity for ethical understanding.