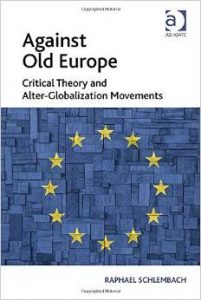 Raphael Schlembach’s Against Old Europe provides a detailed analysis and critique of the alter-globalisation movement’s politics by looking at the composition of their theory over the last twenty years. At the core of this, is the question of a ‘European identity’ in the Post-Cold War era. The impact of America’s global dominance and the rise of neoliberalism has sparked fierce debate within Europe, particularly among the movements that have sought to resist such measures. The book weaves in and out of these debates between several leading intellectuals noting the relationship between theory and action and its consequences. The recent growth of populist politics in Europe, both of the left and right gives the book a strong contemporary relevance and forces us to ask many questions regarding the resistance to capitalism and the future of Europe.

The book has a substantial Introduction and six chapters. Of the six, five are dedicated to a single thinker who has written around the topic: Jürgen Habermas, Antonio Negri, John Holloway, Moishe Postone and Alain de Benoist. The final chapter is a reprise of the book’s findings and deals with the author’s own thoughts on the issue. Given the focus on intellectuals and their ideas, the book could be seen as little more than an academic commentary. However the real power of the book, and to my mind it’s central and most potent factor, is it’s demonstration of the inter-relationship between the theory of Old Europe and the course it has taken. The focus here is on the movements and activism that have governed the majority of anti-capitalist politics in the last two decades, both within Europe and beyond.

In the Preface, Schlembach makes his goals for the book clear: ‘The point of this book is to contribute to an argument against Old Europe, without at the same time coming to the defence of the nation-state’. (vii) The argument against Old Europe principally takes to task the notion of an authentic European identity in opposition to the perceived colonization of Europe by the US with neoliberal economics. (2-4) The positing of a homogenous European identity provoked problems in relation to anti-capitalist politics; it seems nationalistic and provides a rather crude criticism of capitalism that is heavily identity based. The identity of Old Europe seems to posit a more traditional variant of capitalism in opposition to the finance-led model of the US. These positions, as Schlembach notes, became very dominant in the opposition to the Iraq war and have become popular among alter-globalisation movements. (1-20)

The nature of this politics can be heavily conspiratorial in its ideas. US influence in world politics and economics is enormously powerful and has been for some time now; this does not mean that capitalism is a US-led conspiracy with the elites in tow, nor is neoliberalism an invention of the US to exert its power over Europe and the world. As Schlembach notes a “treatment of globalisation processes as manufactured, promoted and controlled by a global elite of politicians, economists and bankers disregards the structural elements of the relations of domination that are derived from its mode of production”. (79) Engagements with capitalism must retain an understanding of its systemic character Schlembach insists, to forego this reality risks the formation of a conspiratorial notion of how capitalism functions.

Chapters two and three on Jürgen Habermas and Antonio Negri are heavily critical of both thinkers and their commitment to Old Europe. Schlembach analyses the relative merits of both their theoretical works and ideas; with Habermas there is an examination of his Communicative Rationality and with Negri an understanding of the ideas surrounding his Empire thesis, which he co-wrote with Michael Hardt. In both cases, the theories are linked with the concept of Old Europe and are criticised from this perspective.

Schlembach’s criticism centres on the works both have produced in relation to changing social conditions within capitalism over the past thirty to forty years, specifically in the Western world. Following this, both have sought to overcome what they perceived as the limitations of previous revolutionary and critical theories of society they were associated with. For Habermas, the attempt to overcome the Frankfurt School’s early pessimism and for Negri, a revaluation of the autonomous Marxist movements of which he was a part in the 1960s and 1970s. These attempts at overcoming have led both into problems: the totalising nature of Marx’s critique is swapped in favour of a more atomised criticism of capitalist culture and specific elements of its recent evolution. This inevitably leads to solutions that bear little trace of the revolutionary nature of Marx’s work. Somewhat predictably, systemic reform seems to be the antidote to the problems of capitalism. With this focus, it is hardly surprising that both endorse a positive vision of European identity. In response, Schlembach discusses the work of Helmut Reichelt, Werner Bonefeld and others in the course of developing his own analysis.

Building on his critical evaluations of Habermas and Negri, Schlembach turns to the work of John Holloway and Moishe Postone in the following two chapters. As before, both thinkers’ work is presented and then subjected to rigorous analysis. It is clear that Schlembach is more favourable to Holloway and Postone, both present a more consistent critique of capitalism that does not attempt to demote the systemic nature of capitalist relations. Consequently, one must seek to show that social change arises out of the structures that exist within the system. Overcoming capitalism cannot come from an external force it must be immanent to the system itself. With this thought both have sought to critique capitalism on the basis of its very nature rather than focusing on particular aspects, unlike Habermas and Negri. Holloway and Postone’s work is well considered and Schlembach provides a critical commentary on both.

Chapter five deals with the work of Alain De Benoist, a reactionary ideologue whose work on nationalism has given him a certain claim to being the far right’s most important intellectual within Europe. His work has focused primarily on a criticism of the European project as undermining the nation state; something that De Benoist feels must be preserved. For De Benoist nationalities are authentic, they are linked with ideas of blood and soil and cultures of purity; in this regard increased immigration and the free movement of labour leads to a clash of civilisations. Schlembach utilises the work of De Benoist to highlight the problematic nature of national sovereignty as a politics of protest, and the influence it can garner from forces not confined to the far right. This serves more as a warning shot than an accusation that the anti-capitalist left has adopted De Benoist’s cultural nationalism; it is more to address the problems of not sustaining a systemic critique of capitalism. In this regard, I feel the chapter is a worthwhile addition; however, it is the weakest of the chapters dedicated to a single thinker.

The book’s final chapter, titled ‘Fight Old Europe’, is definitely the most rewarding. Schlembach provides a walk through many of the problems encountered in the alter-globalisation politics of the last ten years. With reference to the work of the thinkers above he shows the limitations of the nature and politics of many resistance movements and protests groups. Schlembach’s use of first hand material from a variety of protests groups gives his writing a strong sense of place and time.

The most important aspect of the book is its criticism of what Schlembach denotes as ‘identitarian’ politics in relation to nationalism. Schlembach points out that notions of authenticity in relation to national identity, whether they be nation states or more federal structures like the EU, are inherently problematic as a force of resistance to capitalism. The central problem is that by their very nature such identities are exclusionary, they posit the notion of singularity based on nation in this case, and therefore ‘other’ those who do not fit the criteria. The need for positive visions of identity are perhaps understandable but Schlembach is more concerned with pointing out the problems that can and will arise, especially for those concerned with resisting capitalism from the radical left.

From this perspective, the criticisms of the likes Habermas, Negri and others becomes clearer: they have resorted to identifying Europe as a potential progressive platform or alternative to US-led neoliberalism. This has relied on a very narrowly defined understanding of European capitalism as being intrinsically associated with aspects of the Enlightenment and the post war consensus. Identifying a common cause in opposition to capitalism is not in itself a bad thing, but when that identity is based purely on a loosely defined regionalism, it can be crude, exclusionary, and historically illiterate regarding the contribution of colonialism to capitalism’s evolution in Europe. Schlembach’s main point here is that enthusiasm for a European identity in opposition to capitalism amounts to little more than a form of nationalism, one that is incapable in the end of providing a real alternative to capitalism.

One of the most interesting aspects of this book is Schlembach’s observation that Old Europe itself has seemingly passed away from radical politics. In light of the 2008 recession, the ideas that engulfed many of the alter-globalisation movements of the early 2000s have passed. The Eurozone crisis has revealed the problematic nature of a unified European resistance to capitalism. The gulf between Northern and Southern European states seems to be widening with tensions rising regarding the cause and solution to the crisis, added to this, the language of national sovereignty has made a reappearance, with populist nationalism on the increase. (137) Schlembach notes that many of the recent movement’s characteristics follow much of what happened before. However, priorities have changed, the Greek working class is now seemingly at war with the German working class rather than them trying to work together. This point serves to highlight the importance of Schlembach’s work and proves him right that there can be no shortcuts to a real politics of emancipation from capitalism. The problems of Old Europe serve as a useful reference point to the short-termism that seemingly takes over many anti-capitalist movements and projects.

Schlembach’s conclusions are excellently presented and argued. He is keen to avoid the trap of nationalism as a long-term progressive alternative to capitalism. The aim of the book is to reassert the merit of critical political economy and the continued relevance of class politics. The movement, Schlembach insists, must be “a movement against and beyond Old Europe”. (138)