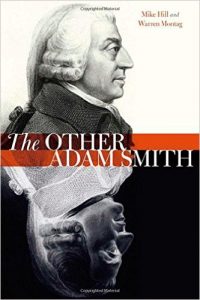 Warren Montag and Mike Hill
The Other Adam Smith

There are, at least, two reasons why Marxists might consider reading Adam Smith. First, while Adam Smith has been seen as the prophet of the free market, a debate has raged as to the nature of his politics with some arguing that he was very much on the left. Second, any reader of Marx’s volumes of Capital, will know that Marx was an obsessive reader of Adam Smith’s political economy. Marx’s Capital is, at least partly, a detailed reading of Smith’s The Wealth of Nations, with Marx noting the silences and contradictions in the text around questions of value and accumulation.

Mike Hill and Warren Montag argue, convincingly to my mind, that Adam Smith was a major thinker across a vast range of fields. In turn, they suggest not just the other Adam Smith but multiple others. While all texts can give rise to different readings, they hint that multiple Adam Smiths are more immediately obvious from reading his output than that of many other thinkers.

The notion that Smith was an uncritical advocate of the market has been strongly questioned. Hill and Montag note, for example, that while Alan Greenspan spoke of his support for an ‘ideology’ of self-regulating markets and gave an Adam Smith Memorial Lecture in Kirkcaldy, the former chair of the Federal Reserve remained ‘bound to a version of Smith that, while not exactly false, can be sustained only by suppressing the enormous complexity and constitutive contradictions of his actual work.’ (3) In dramatic contrast to Greenspan the Marxist sociologist Giovanni Arrighi has argued that Smith was a ‘’Theorist of commercial society who rejects the idea of a self-regulating market and sees the necessity for state intervention to insure economic growth and protect against crisis’ (4).

Adam Smith promotes the market but is clear that market power is often asymmetric with the wealthy using their power to combine and reduce wages for workers. There are numerous statements in The Wealth of Nations that can be quoted to support a left Adam Smith. Perhaps most dramatically he Smith was cynical about the motives of business people, and is well known for observing that business people would tend to meet so they could conspire against the public by raising prices.

Commentators from the left make use of his other major published work The Theory of Moral Sentiment to present a quasi-socialist Adam Smith. The Theory of Moral Sentiment suggests that social good is promoted by empathy and allied values, apparently contrasting with the notion that rational self-interest alone in a market setting is sufficient. Thus left interpreters of Smith have much material to support their reading. Hill and Montag reject this a binary of the ‘left’ versus the ‘right’ Smith and in doing so note that while best known The Wealth of Nations and The Theory of Moral Sentiments are only part of Smith’s output. While Smith had some of his work destroyed, such as his study of astronomy, which he felt was inadequate, much was published in his life time and more has emerged since. Most dramatically a number of unknown Adam Smith texts were discovered in an Aberdeen junk shop in the 1960s. Smith was not primarily an economist but wrote on a large number of topics, and it is important to acknowledge often largely forgotten texts including Essays on Philosophical Subjects, Lectures on Rhetoric and Belles Lettres, Lectures on Jurisprudence, and Correspondence.

There are obvious parallels with the evolving reception of Marx’s work. It might be possible to debate the difference between a young Adam Smith who wrote the more humanistic and left The Theory of Moral Sentiments, and the ‘mature’ Smith who wrote The Wealth of Nations. In turn new writing by Marx continues to be published in the 21st century and the Paris Manuscripts and Grundrisse transformed readings of Marx in the 20th century. Hill and Montag resist any easy division between a young and mature Smith and note that both readings are inadequate to our understanding of Smith. They also note that tensions and contradictions in Smith’s work cannot be dismissed, it is not a problem of which Adam Smith to ignore so as to construct a coherent reading. Smith’s own investigations generated particular problems which he was unable to resolve, even if we accept a crude notion of a ‘left’ and a ‘right’ Smith: these are features inherent in his work. Hill and Montag argue that Smith’s corpus cannot

be reduced to being either a theory of the immanent rationality of the market or the expression of an original intersubjectivity grounded in sympathy, or even an ingenious amalgamation of the two. On the contrary, Smith’s works more often than not produce the very contradictions on which they founder. The market performs its miracles (above all in the corn trade) only at the expense of the life it is supposed to support, just as sympathy arises precisely from the impossibility of a communication of sentiments between individuals. (21)

Clearly Smith was an eccentric and ambiguous character. Contemporaries noted that he had a ‘tendency to absence’, for example, he would often talk to himself and sleep walk. He was once so focused on his thoughts that he stepped into a tanning pit full of foul substances and on another occasion forgetfully placed bread and butter in his kettle before making his tea. He lived with his mother for most of his life, who out of maternal affection rather than material self-interest made his meals. Boswell claimed that Smith was reluctant to talk about his ideas in case this reduced his income from book sales. However Smith’s personal absences and ambiguities do not sufficiently explain those in his texts.

Smith, of course, was Scottish and wrote at a time when national identities were being formed, Scotland’s union with England was strongly contested and the 18th century was a period of conflict. Hill and Montag note that while Smith and the other thinkers of the Scottish Enlightenment were working, ‘the nation was at war with its self” (19). They suggest that Smith can be seen as trying to investigate or even create disciplinary divisions of knowledge in a context where discourse was being mobilised in an attempt to discipline the Scottish population so as to resist popular contention including rioting, from getting out of control. In a number of wide ranging chapters that bring together literary theory and the study of 17th century Scottish and English history, they suggest that disciplinary questions were of great concern to Smith.

Economics via the invisible hand of the market can be seen in this context as a form of governance. However the market mechanisms explained by Smith tends to be corroded in various ways. I have tended to argue that Smith was crudely an egalitarian sympathetic to a ‘fairer’ and more democratic order. It is consistent with this approach that he was critical of corporate power, combination and monopoly, fearing that manipulation of the market would exploit workers and buyers. Nonetheless there is an often forgotten element of cruelty in Smith’s work, which Hill and Montag identify as producing necro-economics. An economic system that depends on threat and injury. The providence of the market requires the motivation of fear. Smith in investigating the market helps produce the market but the market to exist must promise death.

The Theory of Moral Sentiments contains numerous references to punishment including execution. To make the market work requires fear, unless individuals fear starvation they may be too ill motivated and lazy to work perhaps. The free workings of the market require Homo Sacer, the category of individual who cannot be killed but can be allowed to die. Homo Sacer explains the British government’s response to the Irish famine, to provide food would disrupt the market because fear of famine motivated work and participation in the market. Such necro-economics is a core topic in The Other Adam Smith, the ongoing attempts to discipline the Greek economy using austerity is consistent with such necro-economics. In the recent UK budget the economic liberalism of the Conservative government has seen 30% cuts in welfare benefits for those too sick or disabled to work. Hardly a day goes by without news of the death of disabled, sick or unemployed individual who has died as a result of benefit sanctions.

Smith suggests that workers may resist the division of labour with a saunter, Hill and Montag illustrate that at the margins of his work the author of The Wealth of Nations, acknowledges the resistance of workers to work place discipline. In short the investigations of Smith whether in wider philosophy or the market, produce contradictions and silences that erode his work. Smith constructs his own weaknesses. His texts helped summon up the market system that he tries to describe, so he helps produce the contradictions and gaps in the evolving market system which he examines.

This is not an easy book, some of the formulations could have been clearer, yet Adam Smith is a much more difficult and sophisticated thinker than is often supposed. His reputation as the father of economics can hide the fact that his interest in economics is a part of a much wider series of investigations. His work was undertaken in the context of widespread social conflict and uncertainty, as an attempt to construct a field of knowledge linked implicitly to social control. The free market right wing Smith is challenged by his awareness of the dangers of markets being manipulated and monopolised. In turn, the benign market that serves humanity with efficiency and grace when it is left to its ‘natural’ devices, is a myth. The market requires continued threat to survive. The challenge to austerity and other elements of contemporary cruelty, which suggest that both human life and ecological diversity are worthless compared to the majesty of the market, demand actions not just at the level of the street and the ballot box. From the Latin American left to, perhaps surprisingly, the interventions of Pope Francis against capitalism, to the struggles of Syriza and the Greek people, have a material effect. Theory too has a material effect and Hill and Montag move us beyond interesting but limited binary debates to show that the, apparently, marginal focus on cruelty in Smith’s work, has helped justify a political-economy of neo-liberal necro-economics. This is, in summary, a tough but rewarding book.