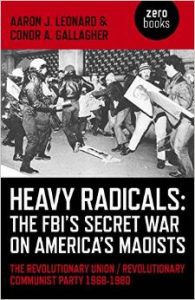 During the recent uprisings in Ferguson, members of the US Revolutionary Communist Party [RCP-USA] were arrested as ‘outside agitators.’ Part of the discourse surrounding their arrest concerned their supposed irrelevance and the ‘cult of personality’ surrounding their chairman, Bob Avakian. Indeed, entire memes are devoted to the existence of the Avakian cult. For many, the RCP-USA is a micro-sect that lacks relevance, whose members will never be more than outside agitators: it is treated as a marginal tendency amongst the US left, an embarrassing Maoist-inclined grouplet that is more a punch-line of a joke than a legitimate organization.

For those who care about the New Communist Movement (that is, the period in the 1960s-1970s in which anti-revisionist Marxist-Leninist groups proliferated), though, the RCP-USA and its precursor, the Revolutionary Union [RU], once represented a significant mass movement. As I have argued elsewhere, the New Communist Movement signified a larger anti-capitalist movement than the New Left of the late 1960s, and the RU/RCP-USA was a significant representation of this movement in the United States. That is, despite the cultish weirdness that currently defines this organization, there was a time when it was a significant and vibrant movement.

Heavy Radicals argues for a similar recognition of the RU/RCP-USA’s historical importance: ‘The standard script of Students for Democratic Society [SDS] reads something like this: It arose in the early sixties full of youthful idealism, got down to the hard work of joining with the civil rights movement, transitioned to anti-war activism, became increasingly radical, then self-immolated in sectarian squabbling with a small hard core of Weatherman going off into a brief foray of infantile terrorism, while the rest of the organization faded away. It is a tight narrative, with a strong beginning, middle, and end. There is, however, a problem. Two huge pieces are left out; the emergence of the Revolutionary Union and its critical influence within the grouping, and the FBI’s aggressive and elaborate efforts to destroy the organization’ (34). Indeed, as Leonard and Gallagher demonstrate, the majority of the SDS’s most radical forces were channeled into the emergent RU, rather than the Weather Underground, and immediately became the focus of FBI counter-insurgency.

What is most interesting about Leonard and Gallagher’s historiography, though, is that it reveals the way in which a mass organization can destroy itself irrespective of state infiltration. Although it was indeed the case that the FBI infiltrated the RU/RCP-USA at an early date – working hard to encourage divisions, prevent unity with other anti-revisionist organizations, etc., this organization itself often functioned in a manner that permitted sabotage. For one thing, despite its talk of a ‘party of the new type’ (a common refrain amongst the New Communist Movement), the RU/RCP-USA tended to function like a ‘general staff of the proletariat’ and in fact worked, contrary to its professed mass-line, to prevent feedback between the leadership and rank-and-file. An over-arching tendency to rewrite its own history after damaging splits prevented self-criticism: the final split is bizarrely the event the current RCP-USA treats as one of its greatest victories (the 1978 internal struggle about the meaning of China’s change of direction), even though it meant the loss of most of its membership and the enshrinement of the personality cult around Bob Avakian.

By 1978, despite earlier splits (that, according to the authors, had served to make this organization paranoid of losing more cadre and thus helped to enshrine a mistrust for the rank-and-file), the RCP-USA was the largest extreme left organization in America. Not only was its actual membership widespread, with many of its chapters embedded in the working class (160-82), it also counted various mass organizations as party fronts – the Revolutionary Communist Youth Brigade, the Vietnam Veterans Against The War, and the US-China Peoples Friendship Organization. Unfortunately, the unhealthy internal life of the party that had caused its past mistakes (i.e. its homophobia, its weird position on the Boston Busing Crisis) became accentuated. Faced with the failure of the Chinese Cultural Revolution, the rise of Deng Xiaoping, and the imprisonment of the Gang of Four, the RCP-USA’s central committee imploded and, incapable of handling internal struggle and debate in a creative manner, the organization experienced its most catastrophic split.

What the RCP-USA post-1980 conceives as the moment of its greatest triumph – when it upheld the legacy of the Cultural Revolution by defending the Gang of Four and branding Deng a revisionist roader – was simultaneously the moment of its degeneration. Those who were on the other side of this split, who did not fully agree with the Avakian-led faction’s characterization of the Gang of Four as a revolutionary force, broke the organization when they left. Indeed, Leibel Bergman, one of the founding members, found himself pushed out of the Central Committee simply because he thought there needed to be a more nuanced analysis of what had happened in China, rather than an open embrace of the Gang of Four. Such nuance was disallowed; Bergman’s faction would soon be conceptualized as a ‘pro-Deng clique’ despite the fact that he had also been opposed to Deng’s rise to power (208-9).

Hence, by the end of 1978 the RCP-USA found itself in a decline from which it could not recover. Not only had it lost more than half of its organizational strength, it lacked the ability to understand the deep-seated reasons for this loss and thus could not correct its course: ‘On one level the period from 1978 through 1980 was one where [the RCP-USA] attempted to recover from its most serious schism and maintain its vibrancy. On the other, the steps it took to overcome what it had identified [wrongly] as the shortcomings of the pre-split organization would seal its fate as a marginal group in the larger political universe. Along the way it would endure a wave of political repression – including the killing of one of its members – along with the exit of a large number of veteran cadre’ (224). This period was also the period in which Bob Avakian, now the sole remaining founding member, would consolidate his position as party chair and launch the eccentric cult of personality that has now become synonymous with the RCP-USA.

If I have any complaints with this thorough exposé of the most significant organization of the US New Communist Movement – the only historiography that has thoroughly traced the rise and fall of an organization that is currently known only because of the characteristics it developed when it began to degenerate – is that it is sometimes hampered by cold war ideology. For example, when it mentions the importance of William Hinton’s Fanshen it feels the need to claim that this book, which examined the Chinese Revolution’s development in a single village, demonstrates ‘an absence of more critical scrutiny’ (114) without any arguments as to why this is the case; it feels inherited from a particular historical discourse that the works of Hinton, among others, exist to challenge. (Although, it is worth noting, the authors ended up provided an interesting factoid that I did not expect: Hinton was himself a member of the RU/RCP-USA.) These tangential endorsements of a hegemonic narrative about Chinese Communism, all of which lack any citations or logical arguments, were somewhat cloying to encounter since they detracted from an otherwise clear-headed narrative.

Despite this problem, though, Leonard and Gallagher’s historiography reads as a grand political tragedy: it is the story of an organization that, despite significant state interference, temporarily became the primary force of revolution in the United States, and then, also despite state interference, imploded and became a marginal grouplet. Apprehending this tragedy should provide the contemporary left with several useful lessons.

The first lesson, and one the authors indicate at the outset, is that the possibility of state intervention in anti-capitalist organizing is timely: ‘determined, organized resistance and political repression are intimately intertwined … particular actors and repressive agencies have shifted … [but there are] certain things that stand as universal’ (3-4). Although the state is not always responsible for the ultimate fate of a resistance movement, it will still work diligently to infiltrate any such movement and accentuate whatever internal contradictions it discovers.

The second lesson is that we might have more to learn from the anti-revisionist New Communist Movement than the New Left, since the former actually produced a larger movement than the latter. I would argue, though similar histories have yet to be written, that the New Communist Movement in other countries also possess a rich and valuable, but no less tragic, trajectory.

The final lesson is that we can learn from the internal deficiencies that led to the RCP-USA’s degeneration. This lesson is connected to the second lesson: on the one hand, we cannot discount the significance of an organization that is unified in theory and practice because such a unity leads to the kind of growth that frightens the ruling class; on the other hand, we need to be aware that authoritarianism and dogmatism are always challenges that such organizations will face.