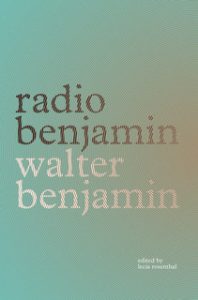 Mike Wayne is a Professor in Screen Media at Brunel University. His most recent publications …

Like his friend Siegfried Kracauer, who wrote for the Frankfurter Zeitung, Walter Benjamin engaged with the new mass media and did not only write about their impact and their implications. Benjamin let the emerging conditions of urban mass society seep into his thinking and methods, reconfiguring what it meant to be an intellectual in the first decades of the twentieth century. Between 1927-33, Benjamin wrote and delivered some 90 broadcasts for the new medium of German radio, working for both Radio Berlin and Radio Frankfurt. In this handsome new English language translation of some of the key surviving transcripts of Benjamin’s radio works, editor Lecia Rosenthal gives us a further insight into Benjamin’s work, the development of his philosophy and his talent as a cultural producer.

Benjamin himself was rather disparaging of this work, which suggests a residual influence of an older model of the bourgeois intelligentsia still operative. In the essay ‘The Author as Producer’ Benjamin argued that the progressive intellectual had to do more than simply supply the production apparatus with material. Instead ‘within the limits of the possible’ they had to transform the technical apparatus ‘in the direction of Socialism’, which could be interpreted as developing the cultural capacities necessary for real change. While Benjamin may have felt that his work in radio fell short of this injunction, they do display a clear pedagogic ambition as well as a playful command of the technical possibilities of the new medium.

Readers of Benjamin will recognise in these broadcasts many of the concerns, themes, methods and even outline ideas that can be found in his writings. The bulk of this book consists of Benjamin’s radio stories for children which he delivered in the Youth Hour on Radio Berlin and Radio Frankfurt. Childhood as experience and recollection was a central theme in Benjamin’s work. We can see in the stories Benjamin tells about robbers, bootleggers, gypsies, witches and Kasper Hauser that he saw the childhood experience as one fascinated in marginal figures, those on the edge of the law and civilisation; those on the edge of historiography in fact, bleeding into folktales, fairytales and myths. These were stories that demanded to be read critically and indeed allegorically. Susan Buck-Morss (1989, 263) has argued that children were a model for Benjamin’s conception of a critical theory of cognition.

What Benjamin found in the child’s consciousness, badgered out of existence by bourgeois education and so crucial to redeem (albeit in a new form), was precisely the unsevered connection between perception and action that distinguished revolutionary consciousness in adults.

The pedagogic ambition of the fairy tale is one example of that unsevered connection between perception and action (here moral lesson). In the radio broadcast ‘Berlin Toy Tour I’ Benjamin begins by reciting a fairy tale from a favourite author of his, Amélie Godin. This is the story of ‘Tinchen’ – a young girl who must heroically save her brothers. When the children are orphaned, a good fairy promises that they will come to no harm as long as they do not fall-out with one another. On cue, an evil wizard arrives on the scene and causes the brothers to quarrel by showering them with gifts. The wizard promptly whisks them off to his cave. So it is up to Tinchen to save them. She must travel to his cave but without ever dallying along the way. The wizard sets traps for her to tempt her to stay put and these traps look remarkably like the then contemporary Department stores with their cornucopia of toys: ‘carousels with ponies and wagons, slides and rocking horses, and above all, the most magnificent dollhouses’ (38). Yet solidarity with her brothers demands that she must resist the temptations of commodity fetishism even as Benjamin makes clear that the utopian images stored up in the abundance of toys are not to be puritanically dismissed, but instead released from the spell of capital. At the end of the programme, after Benjamin has recounted his own visit to a Department store’s toy section, he wonders if he is going to get letters from parents of the listening children, complaining that he is stimulating their desire for expensive toys. To which Benjamin responds:

the more someone understands something and the more he knows of a particular kind of beauty – whether it’s flowers, books, clothing, or toys – the more he can rejoice in everything that he knows and sees, and the less he is fixated on possessing it, buying it himself, or receiving it as a gift. Those of you who listened to the end … must now explain this to your parents. (43)

In ‘Much Ado About Kaspar’ Benjamin shows his talent for comedy with a quasi-Shakespearean farce full of anarchic energy channeled by his protagonist Kaspar, a fool and an inadvertent sage. The play shows Benjamin’s deft awareness of the audio nature of the medium and how sound works to evoke scenes in the mind. At the same time the play self-reflexively comments on the nature of radio throughout. In ‘Prescriptions for Comedy Writers’, Benjamin and his friend Wilhelm Speyer simulate a conversation between themselves, as critic and playwright. The piece reveals the fundamental principles of artistic production that Benjamin believed in. He and Speyer discuss how collaborative work in cultural production was central to the modern production apparatus. In his role as literary author, Speyer invokes an older model of the bourgeois intelligentsia: ‘there’s always the risk’ he wonders ‘of the central literary idea getting completely lost.’ Everything becomes just a montage.

Benjamin: But that’s just it: the central idea should not be sheltered, so to speak, in a literary finishing school, protected from the harsh winds of reality. It should develop in this harsh reality amid the objections of the critic, the dramaturge, etc., etc.’. (277-8)

And of course Benjamin’s method in the Arcades Project was precisely a kind of collaboration via the montage of images and voices he draws on from the whirlpool of collective life. In this volume, Benjamin is frequently seen comically unveiling the mechanics of how things work, letting the audience in on the secrets of life. In one episode in ‘Kaspar’, the hero, fleeing from his inevitable pursuers, enters a zoo and pretends to some children that he can understand what the animals are saying to each other. When they come to the apes, the children want to know what the big baboon is saying to the younger apes. He is, apparently, recommending them to act silly and pretend they are dumb when humans are around. When the children ask why they would do this, Kaspar translates the baboon’s words to the younger apes: ‘If humans don’t know how smart we are, and don’t notice that we have a language of our own, then they won’t force us to work’ (214). At the end of his radio conversation with Speyer, they conclude that the latter is using the genre of comedy to make some pretty barbed comments on the middle class audience for the play. To which Benjamin notes: ‘it’s a good thing no one heard us’ (282). This fine volume is full of gems like this that add further dimensions to our understanding of that most multi-faceted of intellectuals.