Marx & Philosophy Review of BooksReviews‘The Fissured Workplace: Why Work Became So Bad for So Many and What Can Be Done to Improve It’ reviewed by Hans G Despain 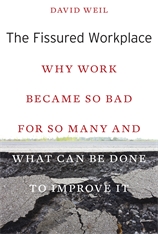 David Weil
The Fissured Workplace: Why Work Became So Bad for So Many and What Can Be Done to Improve It

There has been a mutinous transformation in the modern workplace. The relationship between employer and worker has been profoundly “fissured.” Today the employer-employee relationship is often merely a part of a much larger ensemble of legal relationships. Worker-employer bonds, responsibilities, and accountability between ensembles of participates have become deformed. Indeed the employer-employee distortions of accountability seem to be the very intentions of the mutinous transformations.

More specifically, very large oligopolistic firms are able to shed their responsibility towards workers performing labor that directly benefits these massively large oligopolistic firms. For example, Apple Inc. has more than 750,000 human beings across the globe manufacturing, assembling, distributing, marketing, and selling its products, while only 63,000 are actually “employed” by Apple (51), nearly half of these workers are retail workers employed in Apple Stores (173).

There is an important new book that impressively articulates the mutinous transformations that have occurred and are being practiced. David Weil’s The Fissured Workplace explains how large oligopolies making massive profits are able shed the responsibility of directly employing workers, while at the same time get their products produced and profits generated. Weil’s theoretical framework is unambiguously neo-classical economics. This puts Weil at a disadvantage. Nevertheless, Weil’s achievement is monumental. The brilliance of Weil’s book is fivefold.

First, Weil luminously describes: (a) the segmentation of workers within industries, (b) the “fissuring” of responsibility, pay-scaling, benefits, etc. in the modern place, and (c) the fragmentation of legal accountability and liability in the law codes and legal enforcement of an epidemic of violations of laws. Weil brilliantly explains and portrays the historical processes of workplace “fissuring” (93-177; 268-85).

Weil adroitly explains how outsourcing and subcontracting has taken over the workplace (99-121). The relationship between employee-employer is so completely deformed, that the question of “who is an employee?” has become the wrong question. “The right question to be asking is … to what extent should firms be able to choose organizational structures that preclude unionization by avoiding having employer-employee relationships at all?” (203). Weil explains that franchising has become a form of labor extortion (122-58). Supply chain management and strategy allows large firms to get their products cheaply without having to directly employ those producing products and services.

Second, Weil couches this description in the evolution of the modern corporation. This is an very important part of the story. In the 1950s John K. Galbraith (1952) explained that the modern capitalist economies had metamorphosed into two distinct fractions. One fraction of the economy being the technically dynamic, massively capitalized and highly organized and planned corporations and the other fraction being hundreds of thousands of small and traditional proprietors. Together these two fractions constituted what Galbraith called “the new industrial state” (1967).

A new political economic environment has emerged making much of Galbraith’s description of the “new industrial state” obsolete. In this new environment oligopoly corporations have captured the political process that makes legal codes and blatantly violate the weakened labor laws on the books. In this new “predator state” (see Galbraith 2008) oligopolies dominate not only the economic realm, but also the political realm. Although not relying on the above institutional political economists, but institutionalist-informed ones (294-8), Weil explains the new constitution of labor (28-42) within the “predator state”. Fissuring allows massive oligopolized corporations to shed direct employment of workers manufacturing and circulating their products. Fissuring also means that smaller manufacturing and service companies compete for contracts with and for the massive oligopolies.

This is the tip of iceberg of the world of contemporary labor. It is not merely shoe and computer companies, not just manufacturing, but also maid and janitorial services, cable installers, dock crews, hotel services, media companies, banks, package delivery, etc., etc. whereby direct employment of the human beings producing products and providing a service is “shed” by the oligopoly, or “lead business” that directly benefits from and owns the brand for which these workers are indirectly producing.

Workers for small subcontractor-types are typically making very low wages with little or no benefits. The low profit margins of the small subcontractor-types too often generate incentives to disregard labor laws and to carry out work in unsafe and dangerous labor conditions. For example, more than 200 workers have been killed and thousands injured in cell tower construction. These workers typically are working for just above the minimum wage, with no benefits, under conditions of work that violate worker safety and legal codes (107-13).

Third Weil emphasizes that it was the evolution of the modern corporation and conglomeration that initiated “fissuring” and changed the institutional constitution of capital markets (44-9) and corporate finance (279-80), so that corporate shedding of employees is highly rewarded in stock market and private equity payouts (73-4). Weil’s book lacks a detailed description and account of capital markets and the new constitution of finance within modern corporations and modern banking (see Bryan and Raferty 2006 and Lapavitsas 2014 for notable accounts). Nonetheless, Weil emphasizes throughout the book the importance of the “the demands by capital markets” that lead companies, encouraged by financial markets, to deemphasize positive employee relationships, shed direct employment, eliminate “the need to pay the higher wages and benefits that large enterprises” historically provided (11) and “focus on core competencies that produce value for investors and consumers” (8, emphasis added).

Although Weil does not make the argument, it is worth reconceiving our conception of transnational oligopolies in the era of labor fissuring and financialization. For example, Nike has shed so much of it production processes to subcontractors that it might be more accurate to understand Nike as a financial firm with the legal right to finance products with the Nike brand. In addition to financing, Nike also ‘brands’ the merchandise.

Fourth, Weil has a profound expertize on labor legal codes, labor market policy, and regulatory performance. He brilliantly explains how current labor law leaves many employees in highly vulnerable circumstances. Subcontracted and franchised work leave the liability of injury and poor working conditions blurred. Suppliers that oligopolies depend on too often fail to live up to the proper treatment of workers. Oligopolies too often have no means to know (nor do they care to know) about the maltreatment of workers and violations of labor laws. The modern employment relationship bears little resemblance to that assumed by workplace regulations (183).

Fifth, Weil is anxious to sketch a policy response to the fissured workplace era. His primary focus is legislative. He proposes four major objectives for legislative initiatives. First, legislation should stop oligopolies from shedding employment simply as a means to avoid workplace obligations. Second, “vicarious” legal codes should hold oligopolies liable for actions of their subcontractors and supply-chain purveyors. Third, public policies can better affect how wages and human resource polices are set in fissured workplace environments (203-13). Fourth, current laws and any new laws must be properly enforced (214-42). Better enforcement also includes “finding new avenues to inform workers of their rights; and strengthening institutions in and out of the workplace that affect the exercise of [workers’] voice” (248).

Weil’s book is a most important accomplishment. He demonstrates impressively the degree to which workers today are facing conditions of superexploitation. This is because large firms are able to squeeze the subcontractors and supply chain purveyors, these smaller firms then in turn squeeze and mangle workers to stay profitable themselves.

Nevertheless, it is difficult to believe that the situation of superexploitation within global supply chains can be turned around by merely legislative means and stronger enforcement of legal codes. The predator state is far more systemically insidious than Weil’s account would have it. The conditions and logic of reproduction will make it appear that labor laws are contradictory to the system, but it is the system itself that is contradictory. It is high-time to extend democracy to the workplace (Wolff 2013), to institute both a “public bank solution” (Brown 2013), and to recognize that the power-differential in predator state capitalism between massive oligopolies and other economic participants, has led to a situation in which capitalism is no alternative (Despain 2013).