Marx & Philosophy Review of BooksReviews‘Walter Benjamin and the Media: The Spectacle of Modernity’ reviewed by Brian Elliott 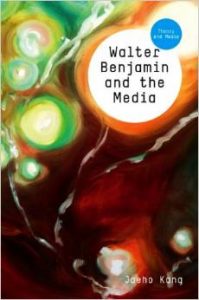 Jaeho Kang
Walter Benjamin and the Media: The Spectacle of Modernity

Brian Elliott is Associate Professor of Philosophy at Portland State University. His latest book is …

Walter Benjamin and the Media offers a wide-ranging analysis of Benjamin’s thought with particular emphasis on communications and artistic media such as radio, newspapers, film, theatre, literature and architecture. The book is organized largely thematically into four extended chapters that focus on these different media as explored in Benjamin’s writings, both published and unpublished, throughout the 1920s and 1930s. In conclusion, Kang considers the extent to which Benjamin’s theory remains of relevance within the field of contemporary media studies.

As Kang make clear in his Introduction (13), Benjamin was both a practitioner and a theorist of media. When his protracted attempt to establish himself within the academy foundered, Benjamin embarked on a career as a literary and cultural critic amid the tense but productive climate of Weimar Germany. His status as a media practitioner most readily relates to his work as a radio presenter in the 1920s and early 1930s. As an openly proclaimed leftist cultural commentator, like many others Benjamin was obliged to cease his activities in Hitler’s Germany. These conditions naturally brought with them a sharpened political appreciation of cultural production in Benjamin’s writings as the 1930s unfolded. Kang certainly does not underplay the underlying political intention of Benjamin’s theory, though it is debatable whether he is completely successful at capturing this intention in its elusive specificity.

Kang’s decision to structure his book thematically rather than chronologically is both an advantage and disadvantage. The obvious advantage is that it is generally more engaging to the reader to have Benjamin’s often abstruse thoughts tied explicitly to particular contexts and problems. The chief disadvantage is that this approach risks failing to convey the stage by stage evolution of Benjamin’s thinking, particularly with respect to his maturing sense of political critique. When examining a theme Kang tends to jump rather haphazardly from one text to another, something that may not even be apparent to the reader due to the fact that the chief bibliographical frame of references in English is the four-volume Selected Works, each volume of which covers many years of writing. For example, within a few pages of his treatment of the theme of storytelling (28-32) Kang refers to an essay on Baudelaire written and published in 1939/40, then to Benjamin’s 1916 essay on language, before considering some fragments on mimetic presentation from 1933. For readers who do not already have the background to fill in the blanks, this kind of scattered assessment can easily prove bewildering.

It is clear that Kang is aware of the disadvantages of a non-sequential treatment on his subject and tries to make good on this by returning to particular points of critique throughout his book. A good example of this is his useful and sharp-sighted distinction between Benjamin and Habermas on the role of media in constructing the public sphere. Kang both credits Benjamin for anticipating aspects of Habermas’s analysis of the public sphere (42) and points out that Benjamin’s reconstruction of modern popular culture has the added advantage of situating the growth of media within a much broader field of visual and material culture. Likewise, in his concluding chapter, Kang is effective in cutting through simplistic assimilations of Benjamin’s thinking to the later media theory of McLuhan and Baudrillard (206-212). Of course, it would be strange to conclude that one’s chosen subject has nothing to offer the contemporary reader, but Kang goes beyond simply asserting Benjamin’s relevance by make a compelling case for the complexity of his analyses of modern material culture.

This case of complexity is made most effectively is what is arguably the heart of the book, composed of two central chapters on ‘art and politics’ and ‘the media city.’ The first of these two chapters centers on what remains Benjamin’s best-known writing, `The Work of Art in the Age of Its Technological Reproducibility’. Three versions of this essay are available to us, but Kang prefers the second from 1936, as he believes it captures Benjamin’s core intuitions best (101). Given that later modifications of the essay largely arose as a result of Adorno’s critical appraisal of Benjamin’s use of ‘unmediated’ psychosocial concepts, Kang’s preference for the earlier version is telling. A fairly clear subtext of Adorno’s critique was the attempt to correct what he viewed as Brecht’s largely negative impact on Benjamin’s thinking. Brecht’s practice as a writer and dramaturge encouraged him to see artistic expression as more directly capable of social-political impact than Adorno could countenance. Kang repeatedly states that he considers Benjamin’s analysis of modern cultural reception more open and fruitful than the thesis of the ‘culture industry’ put forward by Adorno and Horkheimer in their Dialectic of Enlightenment (126, 199-200). By the end of his book, however, it is unclear whether Kang has fully drawn the conclusions of his preference for Benjamin over Adorno with regard to the former’s call to ‘politicize art.’

With a few notable exemptions, the dramatic increase in academic studies of Benjamin has brought with it a notable downplaying of the centrality of Marxist thought in Benjamin’s conception of political theory and praxis. This is both understandable and puzzling. It is understandable, given the tendency towards greater political conservatism that has characterized the Anglophone academy since the 1980s. But it is also puzzling in view of the fact that it is next to impossible to offer an account of Benjamin on anything without integrating the specifically Marxian political dimension. The Work of Art essay is a case in point. As Benjamin makes explicit as the start and end of the text, his purpose is to liquidate the residues of bourgeois art criticism, whose key concepts were then being appropriated by fascist politics. But to say a certain Marxian politics is written into just about everything Benjamin produced in one thing; attempting to characterize Benjamin’s idiosyncratic interpretation of Marx is quite another. Some of the best resources we have for this task are contained within the textual focus of Kang’s final thematic chapter, the Arcades Project. First published in German in 1983 and in English as recently as 1999, this sprawling collection of notes towards a possibly uncompletable book, has proved fertile ground for the academic Benjamin renaissance. To his credit, Kang highlights throughout his chapter the centrality of Benjamin’s reception of Marx to the project that preoccupied Benjamin for the last decade and half of his life. He makes some impressive headway in interpreting two of Benjamin’s most elusive yet pivotal concepts, the dialectic image and phantasmagoria (154-66).

It is in his analysis of the Arcades Project and related texts, however, that some incongruous and disturbing lapses in Kang’s critical judgment emerge. The most egregious of these, in my opinion, is his deceptive presentation of Benjamin’s appraisal of surrealism. Kang presents Benjamin’s 1929 appraisal of surrealism in an unconditionally negative light by offering brief quotations without their generally positive context. For example, while Benjamin writes of surrealism’s unique possession of a ‘radical concept of freedom,’ Kang cites the phrase ‘undialectical conception of the nature of intoxication’ (194) as though the broader positive appraisal did not exist. More worrying still, Kang offers a rare citation from the much more compendious collected works of Benjamin in the German Suhrkamp edition (195) to add further weight to his contention that Benjamin did not ultimately find any positive political content in surrealism. If one considers the German text, it is readily disclosed that the actually intended subject is the conception of the individual in Ibsen around the time of Jugendstil. Given that few readers are likely to refer back to the original German text, the misrepresentation of Benjamin’s thought here is a serious lapse of scholarly conscientiousness. Kang’s animus against surrealism is a common sentiment among Anglophone academics, who are often insufficiently aware of the extensive and sophisticated literary heritage of the movement. The surrealists were a key reference for French intellectuals in the twentieth century, from Georges Bataille to Michel Foucault. Certainly, as the French surrealists attempts to align themselves with communism in the late 1920s there was staunch resistance from those within the movement who looked upon them as nothing more than aesthetes whose desire for poetic license would threaten party discipline. For a critic such as Benjamin, however, this difficult alignment of art and communist politics spoke to his own troubled relationship between the art of criticism and direct political engagement.

In the context of Kang’s book, his unwarranted portrayal of surrealism is a missed opportunity. Given the fact Kang rejects Habermas’ negative appraisal of the role of art in Benjamin’s ‘redemptive critique’ (204-6) a more nuanced appreciation of surrealism could have offered a uniquely valuable test case of Benjamin’s politics of art. The pioneering proto-surrealist experiments in ‘automatic writing’ carried out by Breton and Soupault in the early 1920s, Louis Aragon’s novel on the Paris arcades from 1926, and the expanded use of montage in painting and film, all readily illustrate the aesthetic preoccupations of Benjamin from the time. Admittedly, it would be inaccurate to present Benjamin merely as an adherent of French surrealism, but to reject or sideline surrealism’s influence on Benjamin is to make the reconstruction of his peculiar strain of politics all the harder. Connected to this is another conspicuous absence in Kang’s book, namely the messianic conception of revolutionary social change. Kang’s reluctance to engage with this theme is understandable, given that it presents some of the greatest interpretive challenges. But it is nonetheless unavoidable for any engagement with Benjamin’s politics. This is for the simple reason that Benjamin’s messianism contains his interpretation of historically situated political agency. Given that communications media are a particular outgrowth of modern technology and that technology is tied up with what Benjamin referred to in his 1940 text ‘On the Concept of History’ as a ‘secret agreement’ between generations, any account of Benjamin’s contribution to media studies must grapple with his concept of revolution as a radical break within social historical.

In sum, Kang’s book offers many valuable insights that extend our appreciation of Benjamin’s thought. He makes a powerful case for the fecundity and relevance of Benjamin to current discussions of the media. Kang also captures the dazzling breadth and depth of Benjamin’s output over little more than two decades. But there are also significant limitations of Kang’s analysis. Most notably, he does not offer a conceptually adequate account of Benjamin’s concept of history. Given this shortcoming, Kang’s book offers many moments of penetrative analysis but fails to situate them within a more comprehensive explication of Benjamin’s highly wrought but elusive presentation of modern history. Only on the basis on such an explication can Benjamin’s work shed light on the rise and continued presence of media within modern life.