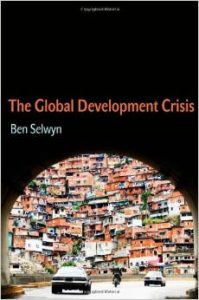 In a world of 7 billion people the central problem remains the nature of global inequality. Development economics has been concerned more with closing the national gaps, but Ben Selwyn argues that a labour-centred approach dealing with both national and class issues is necessary to find a way out of what he calls the development crisis.

In recent times even the international financial institutions have talked of a labour-friendly approach to development. Selwyn’s argument goes much further, arguing that development should not be based on a benign compromise between capital and labour but on labour as a self-conscious force in its own right.

Neoliberal, or what Selwyn (following Albert Hirschman) calls ‘mono-economic’ approaches, pose the problem of development as an issue of poverty. This ostensibly arises from exclusion: from the refusal or inability to take the opportunities available globally. Policy is then about removing barriers and encouraging policies, institutions and cultures that allow business to fully participate in the global and local economic processes. In the short term this will mean that labour (and the poor more generally) have to make sacrifices, but ultimately they will benefit as living standards rise. Put brutally: labour should be grateful for the opportunity to be exploited.

This argument rests on a powerful act of self-deception that insulates neo-liberals from some very obvious problems. Not the least of these is the possibility that it is the global capitalist economy itself that creates the basis for inequality: if some are rich, both on a class and national basis, then this is because others are poor. It also involves a sleight of hand by which markets and states are counter-posed as if the state is a non-capitalist force, rather than something which is internal to the capitalist system. This undercuts any serious engagement with the nature of the state and it prevents us from theorising the empirical regularities of state action in the past and present, and its likely role in the future.

In contrast, Selwyn attempts to engage with a more heterodox development tradition. He builds this around the contrasting approaches of Fredrick List, Karl Marx, Leon Trotsky and Alexander Gerschenkron, Joseph Schumpeter, Karl Polanyi and Amartya Sen. These writers were often poles apart politically but they shared a recognition that capitalism exists as both a competitive and an uneven global system. What Trotsky called ‘the whip of external necessity’ puts pressures on states to try to close the development gap and to deal with the issues of class conflict that necessarily arise.

Selwyn’s starting point is Friedrick List. List’s first hand observations of the United States in the 1820s and of the German states and newly formed Zollverien led to his strong sense of their disadvantageous position in facing the challenge of a more developed British capitalism. British support of free trade was a state project that masqueraded as a cosmopolitan one. Under its guise, the power of the more advanced state could be projected on the weak. Free trade involved economic and geopolitical subordination, allowing the most developed state to ‘kick away’ the ladder of development for those who followed. To compete, a national state had therefore to mobilise to protect infant industries and encourage development. In this way List became the founding father of the statist development project.

For Selwyn, there are three problems with List’s project for an autonomous German capitalism, and they continue to bedevil state developmentalism. The first, and for Selwyn, the most important, is the role of labour. List expected workers to subordinate themselves to their own state and to the longer term interests of the bourgeoisie. As the young Karl Marx put it, List wanted to protect the German bourgeoisie from exploitation by the British bourgeoisie, but not the German proletariat from exploitation by the German bourgeoisie. Today too, statists stumble on this problem and even the more radical ones often suggest the need for workers to make sacrifices for ‘development’

The second issue is that of imperialism. Again, if the German bourgeoisie resisted subordination to the British, they had no qualms about subordinating other national bourgeoisies to their interests. In the US, List had seen how the early American state had developed the Monroe doctrine. Similarly, he was anxious that the German bourgeoisie should be able to share in the domination of what he called ‘the warm regions of Asia and Africa’. Closer to home, he anticipated that a successful German capitalism would exercise a degree of power over the areas to its east. He even saw free trade, once developed, as a way in which Germany could share in the exploitation of such areas. No less, the developmental states that have followed have usually had hinterlands that they have had few qualms about exploiting, even as they felt their inferiority against the more advanced states.

The third issue is that of state effectiveness. This is an issue of capacity, competence and politics. States must be able to rise above the conflicting interests of the ruling class in any society to drive development forward. But the different factions in a ruling class may not be willing risk their immediate positions and not least if there is a challenge from the workers and peasants. Developmental states need, therefore, to be underpinned by a corporatist development bloc, or they need to be able to impose some order and vision themselves. There have been some strikingly successful examples of this. But there have been striking failures too.

Throughout the rest of his book Selwyn explores different aspects of these issues. Gerschenkron and Schumpeter are used to tease out why a simple reliance on the market as the development mechanism cannot work. Although anti-Marxist, they complement elements of Trotsky’s analysis of capitalism as a global economy built around uneven and combined development. But they also allow Selwyn to consider some of the complexities of statist development. Gerschenkron had the strongest sense of the way that Trotsky’s ‘external whip’ forced states to innovate institutionally or fail to resolve the development problem. Schumpeter, in contrast, was a ‘bourgeois Marx’ who welcomed the fact that capitalism was based on creative destruction. But Selwyn argues that he was too focussed on what happened within an economy. To go beyond Schumpeter, Selwyn sets out in some detail how creative destruction operates on a global scale, drawing on the nature of production networks in the global economy today to illustrate this.

Polanyi and Sen, on the other hand – while grappling too with the issues of backwardness and state and market – offer a more sympathetic awareness of the plight of those at the bottom. They challenge not only neo-liberal approaches but also expose weakness in the statist approach in its view of labour as a secondary issue. Selwyn argues that Polanyi, however, is much more effective as a moral critic of the market. This limits his capacity to see the scale of the social change required to allow humans the dignified lives he wants for them.

For Selwyn, it is Amartya Sen’s concept of ‘development as freedom’ and social justice that offers the basis of a more powerful critique of capitalism. Sen sees development as more than economic growth and partially rejects the instrumentalism of labour. He insists that development must also involve positive freedoms without which even more formal political freedoms are meaningless. Selwyn sees this as offering logical support for a more redistributive political economy. But he regrets that Sen does not follow the implications of his own argument. He fails to confront the extent to which markets are based on coercion and exploitation and because of this he is too ‘timid’ when it comes to considering the scale of the social change that would be necessity to achieve even something as basic as an entitlement to food.

Discussion of a process of labour-centred development forms the basis of Selwyn’s last chapter in which he also looks at some of the ways in which workers in developing countries, in both the formal and informal sectors, are trying to assert some control over their lives and the wider social processes. In the process, he argues, they necessarily come up against the economic, social and political limits of capitalism.

Selwyn’s account of this heterodox tradition is clear and nuanced. He incorporates a mass of fascinating evidence drawn in part from his other studies of the way the global economy operates. Anyone seriously interested in any of the arguments about development will gain a lot from viewing them through the prism that Selwyn offers and they should be encouraged to read this book.

There are, however some threads left loosely tied. One is the issue of imperialism. He raises this early on but then it gets lost. This is unfortunate because not only does war itself have significant development consequences, so too does the threat of military conflict and the military burden. No less, the environmental crisis is all but absent. This is strange since it would seem to re-enforce the need for a rethinking of the development crisis. And while in his concluding pages he recognises that any labour-centred development ‘within, against and potentially beyond capitalism’ must be ‘a global project’, he leaves hanging the issues of how this relates to state power and the possibilities within the wider global capitalist system. These are hardly new questions, but it is to Selwyn’s credit that his challenge to neo-liberal and statist approaches to development should encourage us to return to them.