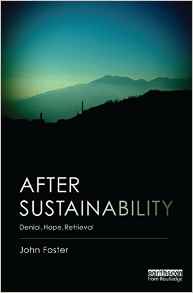 Brian Elliott is Associate Professor of Philosophy at Portland State University. His latest book is …

While institutional and theoretical agreement on any stable sense of ‘sustainability’ has been an issue for decades, there seems to a growing chorus of opinion calling for us to move beyond the paradigm of sustainable development (SD) in all its formulations. The most obvious reason for this disenchantment stems from the widespread realization that environmental policy and activism conceived and enacted under the aegis of SD over the last three decades have not proved equal to the complex challenges entailed by climate change. After Sustainability by John Foster makes this very case, but delves deeper in its diagnosis of what is amiss with SD. He organizes his analysis into three parts: the first part offers an analysis of progressivism and collective denial; the second gives an account of climate change in a condition of profound ecological tragedy; and the third points in the direction of a possible future condition of ‘existential resilience’.

Having previously published a book on the ‘sustainability mirage’, here Foster deepens his critique by placing the failure of SD within the context of an extended diagnosis of progressivism and what might plausible make up a form of human life beyond it. This history encompasses what is generally recognized as the age of neoliberal ascendency (following the 1973 oil crisis) and the rise of the consumer society in the mid twentieth century. But this is just the tip of the iceberg, as Foster ultimately sees sustainability as a late fruit of a progressivism, that begins with the rise of the western scientific worldview in the sixteenth century.

For radical ecological critique, this is a familiar narrative. The twin cultural-political processes of modern scientific and technological advance, and the colonization of the Americas, are often seen as early aspects of a globalization project that breaks organic ties to place and time-honored cultural practices. All that follows can then be interpreted as motley manifestations of a relentless drive for progress. Progress, schematically and abstractly grasped, amounts to a sort of secularized version of salvation-history, one where the moment of collective self-realization is held in indefinite abeyance.

Given the prevailing power of this progressivist worldview, Foster contends, the truly tragic nature of climate change cannot be acknowledged. Foster understands this tragedy not in the banal sense of a recalcitrant cluster of environmental ‘negative externalities’, but rather in the profound sense of a singularly human capacity (technical ingenuity) inadvertently undermining the preconditions for human life. In other words, climate change signifies the perversity of humanity’s greatest strength leading to its eventual undoing. The recourse to a poetic trope (the ‘tragic’) is telling. In his eagerness not to follow the more conventional analysis of climate change as a technically induced ‘problem’ that can be overcome by further technical innovations, Foster ends up poetizing what is, in reality, a matter of historically embedded, but nevertheless alterable, global geopolitics.

For Foster, following the lead of other recent analyses, the kinds of SD fixes proposed to tackle climate change amount to elaborate forms of collective denial. Using Stanley Cohen’s typology, Foster sees the SD response to climate change as a blend of ‘implicatory denial’ (where the problem is recognized but no adequate action follows) and ‘interpretive denial’ (where again the problem is recognized but its gravity is downplayed). There is clearly a tension here. The denial thesis depicts human agents as, on some level at least, aware of the realities of climate change and yet, on another level, masking or evading those realities. This stands at odds with Foster’s tragic thesis, according to which humans in thrall to progressivism are, on any level, unaware of the true nature and meaning of climate change. While a suitable context of therapy could work with denial, no such recourse is available for a tragic condition.

The second part of Foster’s book is the most theoretically involved and philosophically sophisticated. For readers looking for a more practical response to climate change, it will undoubtedly represent the most frustrating section of the work. Foster makes no bones about aiming at an exclusively conceptual analysis of climate change, and so, on his own terms at least, he cannot be readily faulted for a lack of practical applicability. It remains eminently possible, however, to critique Foster’s efforts precisely on conceptual grounds. He puts his ethical cards on the table at the beginning of part two, claiming that virtue theory is essentially better placed to capture what is at stake in environmental responsibility than the traditionally more dominant paradigms of consequentialism and deontology. Part of Foster’s justification for this claim is his concern that modern environmentalism has become increasingly preoccupied with the well-being of future generations, when what it should be most concerned with is the current state of human life. Foster’s rejection of the kind of cost-benefit analysis that acts as a default lens for environmental policy lies close to hand. However, his rejection of what he considers a Kantian doctrine of a universal right to life, does not surface in full force until the very end of the book.

Chapters five and six make for somewhat laboured analysis of Foster’s theory of the self. In a nutshell, Foster is clearly operating with a conceptual dualism (or perhaps dialectic) of authenticity and inauthenticity. Overall, his perspective brings to mind early Heidegger, who is referenced explicitly only once, but appears otherwise to haunt Foster’s text with grim tenacity. After many twists and turns he eventually settles with an appeal to what he calls the ‘dark self’: ‘The living ground of our being is necessarily dark to us – not psychologically dark, like the Freudian id, that the ego suppresses from sight for its own security, but logically dark’ (133). One can hear echoes here, not only of Heidegger, but other adherents of the phenomenological tradition such as Sartre and Merleau-Ponty: ‘The dark self is the whole being-in-context that we know we must each individually be, but that for the self attending to itself always eludes being grasped’ (134). In making the transition from part two to three this darkness of the self is conceptually referred back to a genuine relation to ecological wildness, in other words to what is precisely lacking in all forms of progressivism, including of course the sustainable development paradigm.

The final part of Foster’s book, then, considers how a relationship to wildness could be retrieved on the hither side of the progressivist paradigm, and in the increasing likelihood of catastrophic global climate change. As indicated, Foster is in no mood for adding to the myriad blueprints laying out a more sustainable future. Rather than colluding with climate change denial, instead his idea of existential resilience must remain fully cognizant of the profoundly tragic nature of our shared ecological condition. Just as a tragic protagonist cannot evade tragedy through attempts to avert the inevitable unravelling of fate, so too must Foster’s retrieval resist the urge to propose solutions to the ‘problem’ of climate change. It is telling that, throughout his analysis, Foster has recourse just as much to poetic observation as to theoretical prose. This choice is clearly not casual or cosmetic. His perspective is deeply imbued by his encounter with the Dark Mountain Project lead by Paul Kingsnorth and Dougald Hine. The Project’s adherents are bound by a shared conviction that the game is up with modern civilization. But it is one thing to reach this realization, another to set out what we can wish for after the inevitable end.

An obvious criticism of Foster’s analysis as a whole is its distinct tendency to see climate change as the generalized result of progress. This implies that both the causes and the effects of climate change pertain to ‘humanity’ in some indeterminate sense. While he does, in more incisive and urgent passages, substitute ‘capitalism’ for ‘progress’ he resolutely resists any attempt to see the crisis of climate change as the result of a historically unique set of economic and political conditions. Foster’s presentation of tragic modernity places his genre of ecological analysis in close proximity to the kind of valetudinarian cultural critique offered by Oswald Spengler (1932) in his 1918/22 work The Decline of the West. For a German intellectual and cultural scene reeling from the defeat of war and incipient economic meltdown, the thesis of civilizational collapse proved ominously attractive. Similarly, Foster’s book taps into a powerful current of catastrophism that has emerged as the likely consequences of global climate change predicted within the scientific community have become graver.

While After Sustainability undoubtedly offers a thoughtful and engaging appraisal of climate change, its chief weakness is its lack of concrete historical analysis. One needs, above all, to understand the specific economic and political conjuncture which has brought about levels of atmospheric carbon unknown in human history. The data clearly show that the steepest rise in greenhouse gases began in the post-WWII era, precisely that golden economic period celebrated by western democracies as the best of times. This is also the period in which the slow, but inexorable, neoliberal refunctioning of the state took place. A second, more virulent phase began in the 1980s with the collapse of the Soviet Union on the near horizon. Making this connection with neoliberalism as an entire social and cultural formation, rather than just a specification of governmental operation, is absolutely vital for understanding what has led to and, it must be added, what might adequately respond to anthropogenic climate change.

In a telling passage towards the end of his book Foster notes how the environmental movement, both in theory and practice, is dominated by ‘the left-liberal end of the Western political spectrum’ (193). He then goes on to give the impression that liberal individualism and varieties of socialist critique are interchangeable, whereas there are clearly numerous fault lines between them. As has been well established, varieties of socialist critique from the nineteenth and twentieth centuries have drawn attention to the numerous imbrications of individualism and ecological destruction. Following this highly questionable dismissal of leftist ecological politics, Foster’s concluding comment that ‘the areas where survival and retrieval may be possible will need to be actively defended by their inhabitants’ (209) and denial of any global ‘right to life’ induce something of a chilling effect. It offers a disappointingly unsophisticated final observation in what is otherwise an extremely thoughtful and thought-provoking exercise in ecological thought.