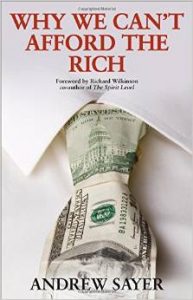 Andrew Sayer
Why We Can’t Afford the Rich

Nicolina Montesano Montessori is a senior researcher in the field of discourse studies. She has …

Why we can’t afford the rich presents an excellent critique of capitalism as well as a critique of the rich. It is based on a broad array of literature, from different schools of economic and political thought, some Marxist and others critical of Marx, and engages with contemporary authors such as David Harvey and Thomas Piketty, novels and classical thinkers, including Aristotle. It presents a nuanced, well-informed vision, which speaks from the perspective of a moral economy. It addresses the mechanisms underlying the inequality of the current economy, which is comparable to the early 20th Century. It questions both the legitimacy and the functionality of how the rich make and manage their money through the lens of social justice. This critical exploration addresses linguistic and ideological features that help legitimate and sustain the current situation.

The author defines the economy “not as a machine that sometimes breaks down, but as a complex set of relationships between people, increasingly stretched around the world” (19, emphasis in the original). Sayer describes how developments in capitalism and in politics facilitated a shift from an economy based on the production of goods and services (in the 1950s and 1960s) to a finance-based economy from the 1980s onwards. These two basic logics are very different in nature. The former was orientated towards long term goals, and had a financial sector that served the economy that was centred around the production of goods and services. The latter is actually dominated by the financial sector, which focuses on short term goals to maximize a return on ‘investment’. It turns financial profit into an end in itself, rather than a means to serve the economy. Significant moments that made this shift possible were the unilateral ending of the Bretton Woods agreement (in force since 1941) by Nixon in 1971, and the free market economy as advocated and implemented by Thatcher and Reagan in the late 1970s and 1980s. The free market economy went hand in hand with neoliberalism, a political economic orthodoxy. Key features are: 1) the assumption that markets are the optimal form of economic organization. This policy requires privatization, deregulation, flexible labour markets and submits public institutes to a managerial logic. 2) A political and cultural shift to prepare people for their role as ‘free and responsible entrepreneurs’ compatible with the market rationality, responsible for their own fate and in competition with each other. 3) Neoliberalism led to a shift in the economic class structure of the countries it has most effected. It involves both a shift of power and wealth towards the rich, and a shift within the rich. The wealthiest 1% are internally dominated by a group that gets most of its income from control of assets that provides them unearned income, which is one of the leitmotivs throughout this book.

The main argument of the book is that we can’t afford the rich on various grounds: their wealth is mostly based on value extraction rather than value creation. It undermines the ‘real economy’ and gives the rich too much social and political power. The way they spend their money is excessive and wasteful, and extracts resources and labour from the ‘real economy’. They contribute excessively to the environmental crisis, and they have vested interests in the continued production of fossil fuel. The conclusion, therefore, is that their presence is unjust, dysfunctional, undemocratic and exploitative.

The book is written for a popular audience, providing the readers with the necessary knowledge to learn about the mechanisms behind the rise of the 1%, the (historical) causes of social and economic inequality, the sources of the wealth of the rich, the difference between earned an unearned income and between the creation and the extraction of wealth. In terms of language, it explains

the concepts of ‘earnings’, ‘investment’ and ‘wealth’. Each of these can have different meanings, one has to do with the creation of value and the other with the extraction of value. For instance, investment can be object orientated – the investment in infrastructure that creates value – or it can be investor orientated, focusing on the financial gain for the ‘investor’. The latter form predominates in the financial sector, and the top part of the 1% thrives on it. Random use of these words overlooks the source of the ‘earning’ or the ‘investment’, and easily confuses forms of value extraction with value creation. The rich are often justified through the mantra that they create jobs. This book convincingly demonstrates that this is a myth.

Part two (chapters –9-11) places the rich in context, and describes how in general wealth depends on the labour of previous generations, our commons, nature and not on the talents or efforts of the rich as they want us to believe. It states that we need to be aware that a good section of the very rich accumulate their wealth not through their merits or hard work, but based on their power, inequalities in terms of birth, unequal relations of labour, access to education, important networks and so on. It argues that their financial power also gives them political power, to the extent that our democracies are overshadowed by a plutocracy.

Part three analyses how the rich got richer and describes the role they played in the crisis. Markets can work well, when regulated. But in the current situation, control is virtually absent. Unearned income extracts money from the ‘real economy’ to the financial sector, which allows the rich to take the profits when things go well, and present the bill to tax payers when things go wrong. They play a gamble (using the money of others) under the principle of: Heads I win, Tails You Lose, supported by our democratic governments that are supposed to control them. Globalization in particular helps them to escape national tax policies and other regulations and to buy labour where it is cheapest.

Part Four, Rule by the Rich, for the Rich, (chapters 14-19) describes the shifting networks between the rich, governments, think tanks, and lobbyists, who use tax havens as their power bases. These chapters describe the dark practices, such as corruption and crime, to the apparently more positive philanthropy, which also entails a series of problems. It explains how the rich overshadow our democracies through the sponsoring of campaigns, and because governments depend on their capital. Individual politicians benefit from their friendly contacts with the financial sector, too. The results became manifest after the crisis, when governments bailed out banks that were ‘too big to fail’, and let the bankers get away with it and with their subsequent bonuses. It provides details of how tax havens apparently hide between $21 and 32 trillion, as well as another $250 billion in assets such as yachts, art and race horses. The rich also dominate our social world, turning us into competing individuals. The attacks on the public sector add to the undermining of a civilized, democratic society.

Part Five (chapters 20 and 21) deals with how the rich spend their money. Their activities – such as excessive travelling, ownership of private jets and yachts – distort the environment (as do many activities of the 99%). They divert labour from more basic activities to produce their luxuries. They drive up house prices, thus making home ownership beyond the reach of large segments of the population. The final chapter describes the twist in the tail: climate change. It presents the main facts, and argues that the world is finite, and that we cannot continue to live in a way that requires three planets to sustain it. The orthodox way out of the financial crisis would be economic growth through redistribution. But growth would make the ecological crisis worse, which causes a dilemma. This double crisis cannot be resolved within the terms of capitalism, due to its addiction to growth. The conclusion (chapter 22) presents a series of steps in the direction of a moral economy. We’ll need to call the rich to account, to denounce their power as unearned, undemocratic and exploitative. We need to control the sources of unearned income, raise proper taxes, and create an economy that serves society.

This is a timely book that provides us with knowledge and arguments to emancipate ourselves. The definition of the economy as a set of complex relations provides us with agency. It helps us see that we can (and should) use our democratic rights and power to reclaim our economic, political and social rights. It creates the awareness that we need to work together towards a more just and sustainable economy, which requires a radical shift away from (current day) capitalism.

I recommend this book to politicians, people interested in social change, NGOs, academics, and all those people, whether they belong to the 99% or the 1%, who have an inclination to come to a critical understanding of the status quo, and who wish to contribute to a world that sustains us, that is more economically and socially just, and that is ready to receive future generations.