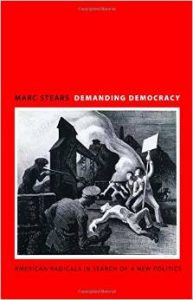 To many outside observers, the United States can seem a nation deeply, almost pathologically, incapable of democratic reform. More concerned with exporting its own brand of democracy overseas than deepening democracy at home, equipped with an increasingly ruthless military and intrusive surveillance apparatus, and fetishising a model of financial capitalism which seems to invite crises, the idea that America might once again provide fertile ground for radical democratic transformations appears almost inconceivable. Its citizens are more alienated from one another than ever before, yet they are more interdependent than ever before too. Levels of political participation continue to sink, and its civil society looks increasingly moribund. And perhaps more than ever, politics is dominated by the wealthy few, often at the expense of the many. These pathologies of liberal democracy are not, of course, confined to the United States; the disenchanted terms of modernity, diagnosed long ago by Rousseau and Weber, make us all strangers in strange lands. But one suspects that Americans must feel this dilemma with particular force, seized as they are with their country’s peculiarly explicit democratic credentials and purpose.

In this depressing climate, the prospects for democratic reform look discouraging. Marc Stears’s Demanding Democracy, therefore, serves as a much-needed counsel of hope. He reveals that the longing for greater democratic authenticity experienced by many today – including, in the academy, members of the deliberative school of democratic theory – is neither a novel nor utopian impulse. The United States, Stears reminds us, has a long tradition of insurgent politics, of unlikely radicals who challenged and changed the status quo. Indeed, the history of the United States in the twentieth century is for the most part the story of everyday Americans – from the pre-war Progressive era through to the civil rights movement and beyond – literally taking to the streets to demand more and greater democracy. Stears links these episodes together and provides us with a history of this tradition, which he refers to as the radical democratic tradition. The achievements of these movements, while certainly not incontestable, cannot be written off as mere utopian posturing by even the most ardent pessimists. Moreover, the original radicals of the tradition Stears portrays were responding to transformations strikingly similar to those of our time: economic turbulence, burgeoning urbanisation, a social order transforming beyond recognition, and, above all, a perceived loss of democratic responsiveness in government.

Beyond providing a good dose of optimism, Stears does a great service to democratic theory in an equally significant manner. In a field all too often fractured along disciplinary boundaries, Demanding Democracy does a great deal to transcend the traditional confines between political theory, on the one hand, and political and intellectual history, on the other. Rather than a straightforward historical account or a purely normative theory, Stears charts the intellectual and practical trajectory of a political movement which still resonates in the present day. It is in this combination of theory and practice that the book has its greatest strengths, and provides its strongest lessons for students of democratic politics. Indeed, Stears recognises the lacuna at the heart of much contemporary political philosophy by identifying its seeming inability to provide an account of how normative principles can be translated into political action. Theories of what an ideally just society might look like may be interesting in the abstract, but in the face of deep injustice and often bewildering political circumstances, they don’t get us very far. Indeed, they can prove a costly distraction. The same holds true with normative theories of democracy. This critique of much contemporary theory goes under the banner of “realism”, and it is to Stears great credit that he does not shy away from its immediacy.

If Demanding Democracy has a failing, however, it is that it feels like only half the story. The radicals of Stears’s history are for the most part confined to the public sphere, demanding better accountability and inclusion from the outside. We are rarely shown the legislative and executive consequences of these movements, except in all-too-brief glimpses. What relationship, for example, did the various movements of the tradition have with political leaders embedded within formal institutions, and in structuring their responses to the changing demands of the public? How were the demands of the radicals carried to fruition in state and federal legislatures and through executive action? Similarly, the enormous cultural shifts within the two dominant American political parties occur for the most part off-stage. The inevitable consequence is that the radical tradition appears isolated from familiar mechanisms of democracy. As Stears notes, this was often intentional – radicals were often suspicious of the motivations behind established political bodies, and moved in and out of alignment with them as circumstances dictated. This rings true – a political movement may better serve its goals by besieging rather than colonising the state – and, in any case, the final acts of these dramas have already been extensively told elsewhere. Nevertheless, the reader is left with the odd impression that there is a step missing between the demands of these movements and their eventual outcomes.

One also wishes that Stears had both plumbed further back and pushed the story onwards. The American radical tradition did not, as he readily acknowledges, emerge ex nihilo. But it is a good bet that the roots of the tradition have only been partially excavated. Dewey’s calls for a new democratic community, for example, echo John Stuart Mill’s hopes that the railways and telegraphs would lead to a national agora or assembly for public discussion. Reconstructing the threads of this transatlantic intellectual ferment would allay some worries that the American radical tradition gained its momentum by drawing on distinctively American intellectual material, and is thus of little or no application elsewhere. Similarly, engagement with nineteenth century American political thought, notably on the withdrawal from politics found in Emerson and Thoreau, could point to possible moments of rupture and discontinuity.

Stears claims that recent calls in the United States for greater democracy, notably from theorists of deliberative democrats, owe something to this radical tradition. This is undoubtedly true, and it would be fascinating to see more made of these links with the present. There are good reasons for not attempting to extent the project after 1975, of course. For one, the dust from the recent past has not yet settled, and historians may still be too close to those decades to assess their impact. For another, the years following 1975 were marked by political trends in quite the opposite direction of the radical tradition: of the conservative cultural backlash in the United States and of the elevation of the neoliberal economic order. There is another story here which, in its own way, shares many of the same features as the radical democratic tradition: one of dissatisfaction with an increasingly desolate urban society; the urge to sweep away a dishevelled political consensus; and the yearning for greater authenticity in the modern world. While the conservative movement was defined by demands for greater cultural rather than democratic authenticity, one cannot help but think Demanding Democracy would be enriched by juxtaposing its subject with this countervailing but related movement.

The final concern to register with Demanding Democracy is that it stands in a somewhat ambiguous relationship with the recent trend towards realism in political theory. While Stears proves a learned guide to recent scholarship, he fails to make a distinction which may have significant bearing on the import of his study. There is a newly emerging division in contemporary political philosophy between positions known as realism and non-ideal theory. The latter treats politics as the matter upon which moral principles work, and attempts to specify how normative ideals ought to guide action in less-than-ideal circumstances. It is best understood as a sub-section of the kind of moralised political theory which lays out grand theories of social justice, and then concerns itself with theory-driven implementation. Realism has come to mean something quite different. In the writings of the late Bernard Williams, realism has come to describe a distinctively political manner of theorising which does not begin from an extra-political moral theory but seeks to ground political normativity on an independent foundation. (Whether it succeeds in doing so is, of course, another question.) This distinction is blurred in Stears’s work, and the theoretical upshot of his study suffers somewhat as a result. This is not to the discredit of the book, however, as this debate is still unfolding and its terms remain in flux. Demanding Democracy thus stands in a landscape which is still revealing itself. On balance, Stears’s study bears a closer resemblance to non-ideal theory than realism, but it will undoubtedly be of great interest to theorists working in both these fields.

Like any insightful, thought-provoking book, Demanding Democracy raises more questions than it answers. As a work of intellectual and political history it is a gem, and is no doubt destined to be a landmark in contemporary debates on realist democratic theory. It is also a reflection of the quality of its scholarship that the majority of criticisms made here do not take issue with what Stears has written, but with what he has not written – and with what every serious student of democratic political theory should hope he has still to write.