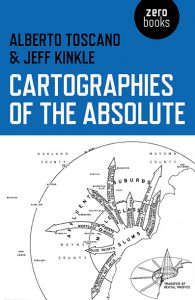 Alberto Toscano and Jeff Kinkle
Cartographies of the Absolute

Among the most evocative concepts to emerge from the postmodernism debates of the 1980s, cognitive mapping may also be the most enduring. Fredric Jameson famously employed this figure as an aesthetic, pedagogical, and political strategy for attempting to represent the unrepresentable totality of the world system in an era of multinational capitalism. The discussion of cognitive mapping served as the climax to Jameson’s influential 1984 essay, “Postmodernism, or, the Cultural Logic of Late Capitalism,” and the idea or practice of cognitive mapping was arguably the key feature of his 1991 book bearing that title, as well as the protagonist of his next one, The Geopolitical Aesthetic (1992). Indeed, as I have argued in my Fredric Jameson: The Project of Dialectical Criticism (reviewed 2014), cognitive mapping lies at the heart of Jameson’s entire critical endeavor, as it is closely connected to such other Jamesonian concepts as metacommentary, national allegory, the political unconscious, ontologies of the present, and archaeologies of the future, and brings together his lifelong commitment to narrative as a social symbolic act. Cognitive mapping may have taken on different guises in Jameson’s own writings, and, however it is imagined, it retains an urgency and actuality in any contemporary criticism aimed at giving form to the world system today.

Jameson’s call for a kind of global cognitive mapping, on a social as well as a spatial scale, has been answered by many artists and thinkers over the past three decades, but perhaps none has embraced the project with the imaginative brio and expansive scope as have Alberto Toscano and Jeff Kinkle in their new book, Cartographies of the Absolute. In this magnificent, possibly unclassifiable volume, Toscano and Kinkle endeavor simultaneous to create a sort of large-scale survey of various artistic attempts at cognitive mapping over the past few decades and to produce their own, critical and theoretical cartography of the world system in the present moment. The result is a major work of Marxist (though not exclusively Marxian) critical and cultural theory that, I believe, ought to be required reading for all who are interested in contemporary art and its relationship to the modern or postmodern condition in an age of globalization.

Their project, like Jameson’s, is fundamentally aesthetic, both in the everyday meaning and the strongly philosophical sense of the term. That is, Cartographies of the Absolute is very much about artistic practice and the exigencies of producing art in the twenty-first century. At the same time, it is a book devoted to ways of seeing, to use John Berger’s still relevant phrase. The problem of visual and figurative representation lies at the heart of the cartographic dilemma, after all. How does one represent the space in a way that is both accurate and useful to the map-reader? Because Toscano and Kinkle are looking at not only the topographical spaces, but the social, political, economic, and cultural spaces as well, the crisis of representation and the cartographic anxiety involved in their project is magnified. As Jameson himself asks in his back-cover endorsement of the book, “How much of capitalism can we see from the moon?”

Toscano and Kinkle take seriously the crisis of representation associated with the contemporary world system. Without placing undue emphasis on related, but ancillary matters, such as questions of modernism versus postmodernism, they demonstrate the ways that artists and critics from roughly the early twentieth century to the present have attempted to map the social and spatial conditions of their worlds and of the capitalist mode of production, now extended to a global scale. Cartographies of the Absolute surveys a vast territory, yet it maintains a clear focus on the representational dilemma itself: “How does one map a totality?”

The title of the book is thus suggestive, and the dual imperatives that animate this remarkable exploration of the aesthetics of contemporary capitalism are visible in both the ‘cartography’ and the ‘absolute’. As Toscano and Kinkle explain,

One of the reasons we have latched on to the phrase ‘cartographies of the absolute’ is because of how it encapsulates the problem of visualising or narrating capitalism today. As the science or craft of map-making, cartography connotes a technical endeavour, judged by its accuracy. And so we experience it in our everyday, especially through the saturation of our lifeworld by the imperative of navigation (or, more sinisterly, of targeting). The ‘absolute’ is a theological and then a philosophical category, gesturing towards that which defies representation, which, contrasted to our mortal perception, is infinite and unencompassed. ‘Cartographies of the absolute’ is a wilfully paradoxical expression, but one that directs us toward the way in which picturing our social and economic world is a predicament at once technical and, so to speak, philosophical. Capitalism, after all, is a religion of everyday life, an actually-existing metaphysics. (23)

The mapping project functions at both the epistemological and political levels, since the scientific program of accurate map-making cannot be altogether distinct from the social uses to which such representations are inevitably put. Ways of seeing are also ways of organizing bodies in space. As in Kevin Lynch’s Image of the City, in which the wayfaring urban pedestrian strives to imagine practical mental maps of the place, the individual subject’s perspective is limited but also desperately interested or engaged.

As both a figurative model and a literal technology, the map offers an artificial, provisional, yet terribly helpful perspective. The God’s-eye view, the celestial overview that could encompass the totality of bodies and spaces is unavailable to any individual or collective subjects, even in the space age or the era of geographic-information-systems. Not surprisingly, this desire for a clarifying overview is also tied to the political-economic spheres in suggestive ways. The vision provided by the Apollo missions gave us the iconic ‘Earthrise’ photograph, which immediately became a branding logo for the Whole Earth Catalog, Earth Day, and numerous other ventures aimed at commercializing a new sense of planetary consciousness. The conspiracy film, which Jameson analyzes in The Geopolitical Aesthetic and which Toscano and Kinkle also explore to great effect, makes possible another vision of a global network of power and knowledge relations, a network that then has bearing on the minutest facets of everyday life. As debased as the image of the map might be, it remains a powerfully desirable one. Cartographies of the Absolute, in a wide-ranging and exploratory analysis, registers the dual nature of the cognitive map particularly well.

Wide-ranging, did I say? Cartographies of the Absolute contains sections on Lukács’s analysis of the antinomies of bourgeois thought from History and Class Consciousness; Sergei Eisenstein’s theory of the cinema and his thwarted attempt to make a film adaptation of Marx’s Capital; the cover art on different editions of Guy Debord’s Society of the Spectacle; criticism of Brecht and Benjamin, and the sociology of C. Wright Mills; an astonishing reading of the cult-film Wolfen, not to mention considerations of Network, Rollover, and Michael Moore’s Capitalism: A Love Story; an astute investigation into the global production-and-distribution networks associated with ‘containerization’; a meticulous analysis of the HBO drama The Wire; and on and on. One might find such eclecticism and diversity a strain on the underlying argument or a disruption of the continuity of Toscano and Kinkle’s theoretical project. And yet, the seemingly free-flowing analyses and scattered speculations strike me as far more effective than a more categorical approach might have been. It is not so much that Toscano and Kinkle replicate the processes by which global capitalism and the attempts to represent its effects are necessarily decentered, deterritorializing, and reterritorializing, but that their understanding of how such efforts ineluctably take place across a wide range of registers, media, and zones.

Cartographies of the Absolute is dedicated to the memories of Allan Sekula and Haroun Farocki, whose own artistic and theoretical projects provide clear examples of a kind of cognitive mapping on a global scale that Jameson had call for all those years ago. As Jameson had pointed out, the model of the urban pedestrian in Lynch’s ‘imageable’ city was insufficient, except perhaps as an evocative example. In an era of globalization, especially, any cognitive mapping worthy of the name must occur on a global scale. Cartographies of the Absolute is a study of that impossible, but entirely necessary, and perhaps unavoidable endeavour. Toscano and Kinkle explore the various ways in which twentieth and twenty-first century artists, critics, and thinkers have attempted to represent this unrepresentable totality in their work. Indeed, to speak in a somewhat Jamesonian idiom, this is the fundamental vocation of postmodern art and theory. As Jameson himself put it in The Geopolitical Aesthetic, it is not merely the case that “we ought to strive for it, but that we do so all the time anyway without being aware of the process.” Of course, there is not only a sort of cartographic unconscious at work in postmodern aesthetic productions, since the concept of mapping has been embraced by various artists, who have “conceived of the vocation of art itself as that of inventing new geotopical cartographies.”

Toscano and Kinkle have supplied a powerfully evocative inventory of the ways in which such artists have produced such cognitive maps, but the most impressive feature of Cartographies of the Absolute might be its theoretical or speculative potential. The book provides a model for critics interested in making sense of the various ways that these artists and poets are making sense of this world. To cite Jameson once more, “in the intent to hypothesize, in the desire called cognitive mapping—therein lies the beginning of wisdom.” Cartographies of the Absolute is already an impressive accomplishment, but it may be even better understood as a beginning or point of departure for an engaged critical theory of the future.