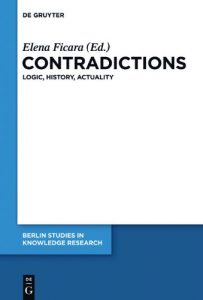 The notion of contradiction is of great importance in several fields: logic (especially non-classical) and dialectics, history of philosophy (from ancient, through German Idealism, to modern), metaphysics, theories of argumentation and disagreement, it also plays crucial role in various political and social contexts.

This book, which brings together papers from a conference that took place at Technical University Berlin in 2011, is divided into three parts: ‘Logic and Metaphysics’, with five chapters focusing on philosophical logic and metaphysics; ‘History’, with four chapters on ancient and post-Kantian philosophy; and ‘Actuality’, where three chapters consider the importance of contradictions from the cultural and political perspectives (two of the twelve chapters are in German, it might have been a good idea to supplement them with abstracts in English). Elena Ficara (from the University of Pederborn), the editor of the volume, remarks in the Introduction that ‘despite the differences between approaches and styles, a basic question emerges, and it is more or less openly addressed in all the papers. It is the question of the irreducibility, reality, and productive force of (some) contradictions’ (2).

Graham Priest, in his chapter, ‘Contradictory Concepts’, discusses the relations among dialetheism, concepts, language, and the world, and especially contradictory concepts which generate dialetheias. The term dialetheia (and dialetheism), coined by Priest and Richard Routley, refers to the view that some truths have true negations: i.e. in a pair of statements of the form A and ­­­¬A both are true. He considers two claims: that dialetheias are merely in our concepts (language), and not in reality, and hence may be removed by revising the concepts. After a brief discussion Priest observes that there are grounds for resisting both these suggestions, and quips that ‘Hegel would have been delighted’ (25) with such a conclusion.

J C Beall’s short contribution, ‘Rapunzel Shaves Pinocchio’s Beard’, is concerned with different versions of the Liar’s paradox. Such paradoxes seem to involve sentences about the empirical world that are both true and false (empirical-world gluts). Beall advocates the view, known as semantic dialetheism, according to which contradictions arise because of the semantic behaviour of the concept of truth (and because of our language). According to Beall the discussed paradoxes should be regarded as fictions, and not genuine paradoxes, and thus: ‘stories are free: make them as you please. Possibility is different; possibility is independent of our creativity’ (29), and truth in a story is different from and insufficient for truth in some world. This approach has also considerable potential for philosophical analyses of literature.

Franca D’Agostini’s ‘Paradoxes and the Reality of Contradictions’ is another chapter tackling the issue of dialetheism and paradoxes. For the dialetheic approach the paradigmatic cases of contradictions involve semantic and set-theoretic paradoxes; sorites; contradictions related to change, motion and infinity; dilemmas and epistemic inconsistencies (31). D’Agostini carefully investigates the nature of true contradictions and paradoxes, and their reality. She discusses paradoxes in the epistemic and metaphysical perspective, and provides an interesting interpretation of dialetheism in terms of alethic realism (where a fact is what can make a proposition true). Such a move enables the conclusion that contradictions are alethically real (i.e. there are many different kinds of contradictions, in accordance with different kinds of facts).

Achille Varzi discusses ‘Logic, Ontological Neutrality, and the Law of Non-Contradiction’. He investigates the ontological status of logic (in the tradition of Kant, Russell, and Gödel): ‘logic is supposed to be ontologically neutral’, ‘free from any metaphysical presuppositions’, and ‘ought to have nothing substantive to say concerning what there is, or whether there is anything at all’ (53), he also enquires into free logic (in the tradition of Leonard, Lambert, and Hintikka), and shows that the question whether free logic is completely pure, universal and ontologically neutral is still open (57). This is a very interesting discussion, presented within a wide perspective, including traditional and more recent approaches (advocated by, among others, Frege, Russell, Łukasiewicz, Jaśkowski, Evans, and Lewis.)

Francesco Berto focuses on ‘Representing the Contradictory’. In order to represent contradictory states he develops a syntactic and semantic extension of relevant logic, and distinguishes between intensionally and extensionally impossible worlds. According to Berto contradictions are human phenomena ‘since we are fallible as cognitive agents, and sometimes inconsistent in our cognitive activity so that not only we can conceive contradictions, but also believe them’ (2); additionally he stresses that logical fantasy can be seen as a gift (rather than as a defect).

The discussion in the first part concentrates upon logic (especially non-classical), metaphysics and ontology; however, as demonstrated by the chapters in the second and third part, contradiction and dialetheism are crucial for philosophical inquiries, and the theoretical background has bearing on the political, aesthetic and biological implications of contradictions.

In the four chapters of the historical part of the book, the authors cover topics ranging from Aristotelian logic to Hegel’s idea of contradiction and Hegelian practical philosophy. Enrico Berti presents ‘Objections to Aristotle’s Defence of the Principle of Non-Contradiction’. The author considers critiques presented at different time by Łukasiewicz, Dancy and Priest, and observes that dialetheism does not offer a clear criterion for distinguishing true contradictions from false ones. He concludes that ‘we must remember that our language is wider than reality, because it can express not only truth, i.e. the real, but also falsity, i.e. the not real. Contradictions belong to falsity, i.e. to the not real’ (107). Berti’s chapter very clearly points to the importance of contradictions and dialetheia for contemporary philosophy of language, it also shows that the problem of the relations holding between language and reality is far from being solved.

The chapters by Angelica Nuzzo (‘The Justice of Contradiction. Logical Advancement and Historical Transformations’), Luca Illetterati (‘Limit and Contradiction in Hegel’), and Klaus Vieweg (‘Zur Logik moralischer Urteile’) turn their attention to contradictions within the Hegelian perspective, and hence offer a change both in focus and in idiom.

Finally in the historical part, Klaus Vieweg considers the role of contradictions for Hegel’s practical philosophy, especially morality and moral judgements. According to Hegel an adequate understanding of the contradiction involved in morality is connected with the knowledge of the idea of the good, and the recognition of the opposition between particularity (of the human being) and universality (of the law). Some of the issues discussed by Vieweg return also in the last part, ‘Actuality’, which comprises three chapters by Gianni Vattimo, Federico Vercellone, and Wolfgang Welsch.

Gianni Vattimo argues in ‘Insuperable Contradictions’ that ‘philosophy never tolerated contradictions’, that it was born to eliminate them and even that ‘Marx’s eleventh thesis on Feuerbach is basically directed against this traditional conciliatory essence of philosophy’ (173). Against this background Vattimo shows that contemporary world needs not so much conciliation as rather philosophical meditation on contradiction, in order ‘to remind us of the ontological necessity of conflict’ (179), and proposes his ‘ontology of revolution’, as opposed to the dominant new realism of the ‘Searle-Bush’ school or ideology, which wants to ‘purify philosophy from the hermeneutic relativism’ (175). This short text is highly provocative, something to be expected and looked forward to in a volume dealing with, among other issues, the actuality of contradictions.

Federico Vercellone devotes his chapter ,‘A Disenchanted Reenchantment’, to hermeneutics and morphology. He briefly presents the approach to hermeneutics advocated by Gadamer and Habermas, and also Adorno and Horkheimer’s dialectic of enlightenment, and discusses morphology understood as the theory or logic of figures, and continuation of hermeneutics. In the perspective of this discussion figures are contradictory forms, i.e. forms of conceptualization which at the same time impose boundaries on the very act of conceptualization.

Wolfgang Welsch analyses in ‘Wie wir auf Konsistenz aus sind – und warum’ the role of consistency and contradictions in yet other dimensions of culture and life: everyday thought, philosophical reasoning, scientific reasoning, and even biological life. Welsch sympathizes with Davidson’s view that ‘coherence is nothing but consistency’ and claims that the pressure for consistency is a biological and ontological demand.

As stated by Elena Ficara in the Introduction the main aim of the book is to ‘stimulate a genuine dialogue between different approaches, so that the understanding of the problem of contradictions becomes as complete as possible’ (1). This aim has definitely been achieved. The three parts of the reviewed book offer most interesting studies, inspiring further research into modern logic, philosophy, and theory of argumentation. The volume has two additional merits: it demonstrates that issues vividly debated in classical philosophy still have their value and place in contemporary discussion; and, secondly, the individual chapters show that the technical notions of contradiction and dialetheism may have relevance not limited to philosophical logic and metaphysics but also for modern political and cultural studies.