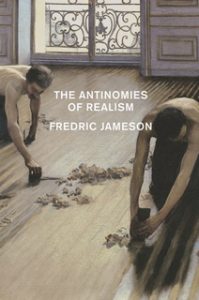 Fredric Jameson
The Antinomies of Realism

The Antimonies of Realism is the third book in Frederic Jameson’s ongoing project The Poetics of Social Forms, his attempt to construct a codex of his Marxist analytic process in relation to different aesthetic forms. It was preceded by Postmodernism, or, the Cultural Logic of Late Capitalism (1991) and The Modernist Papers (2007). In the present volume, Jameson turns his dialectical eye onto the realist form of the novel, more specifically its genesis and flourishing in the nineteenth century, seeking to complicate the pervading view of realism as some kind of simple referential mode of expression, an open window into an omnisciently narrated world of stable subjects. It should rather, he contends, be viewed as ‘a historical and evolutionary process in which the positive and negative are combined, and whose emergence and development at one and the same time constitute its own inevitable undoing, its own decay and dissolution’ (6).

Jameson begins by conceptualising realism as the irrevocable tension between two antagonistic formulations of narrative temporality. The first of these terms he defines as the chronological temporality of the ‘narrative impulse’ which he variously refers to the tale, story or, more precisely, the French term récit; and the second, a kind of eternal present or ‘reduction to the body’ (27) which he designates the realm of affect. This dialectical distinction resembles, in part, the one made by Lukács in his essay `Narrate or Describe?’, an essay with which The Antimonies of Realism appears to be in dialogue and whose presence is felt throughout. Lukács’s dialectic of narration and description recognises an ongoing struggle between two opposing novelistic forces, but favours the `narrative’ style of the epic novelists such as Scott over the `still life’ naturalism of Zola and Flaubert. Jameson thus shifts the ground on Lukács, seeing these two modes of expression as the poles between which realism struggles.

After his introductory chapters Jameson subsequently presents a series of four case studies on Zola, Tolstoy, Pérez Galdós and George Eliot where he seeks to identify the production and codification of affect.

In his study of Zola Jameson locates affect in a kind of `autonomisation of the sensory’ (54), whereby Zola’s overbearing accumulation of descriptive terms causes his writing to slip from its narrative moorings and collapse under their weight. This process is shown to be most prevalent in the expansive lists (including the infamous `symphony of cheeses’) from The Belly of Paris where any symbolic value held by the description (the foul gossip of two of the female characters in the case of the cheeses) is denatured as the varieties and odours pile up. Instead, the perceptions themselves break free of their character affiliation and, liberated from meaning by their excess, become a semi-autonomous unfolding of sense-data (63).

In Tolstoy, affect is exposed through the constitution of his various characters as a series of shifting moods: a pattern of expectations, disappointments and desires. This `distraction’, which causes the participants of the narrative to be prone to sudden bouts of ennui, generosity, indifference, etc., reaches a point where `one is tempted to say that these movements and variations are themselves the narrative (85). This continuum of affect is reflected in Tolstoy’s multiplicity of characters. His mass of different situations and episodes Jameson sees as stemming from kind of a `narcissism of the other’ (91), the author becoming briefly fascinated and then repulsed by these external beings he has created.

Tolstoy’s production and multiplication of characters and internal moods hints at a feature of realism Jameson develops more fully in his analysis of Pérez Galdós: the fading of protagonicity. Jameson intimates that in the work of Pérez Galdós the distraction evident in Tolstoy here causes the sub-plots and tangential digressions of minor characters to end up as the foreground of his novels, where even the supposed protagonists themselves are revealed to be `minor characters’. Emblematic of this mode of affect, Jameson cites the example of the `omniscient narrator’ of Fortunata and Jacinta who later appears as one of Juanito’s acquaintances. This renunciation of protagonicity echoes Lukács’s remarks about the shift from writers such as Goethe and Balzac, polymaths who refused the specialisation which the division of labour strives towards, who, in the spirit of the enlightenment, took part in the great struggles of their day, to those of Zola and Flaubert who refused to take an active part in their society.

Jameson then goes on to provide a, at times quite dazzling, Nietzschean reading of Eliot. He discerns in her moralising code a desire to weaken the social system of ethics of her time (120) and ultimately dissolve the binary opposition of good/evil. Her image of the `web’ is thus recast ultimately as a force for dereification, the characters’ lives only having meaning through their interrelations. In Eliot’s work there are no true villains and, in the spirit of one of her greatest critics, evil does not exist (122). Jameson then provides a demonstration with a close examination of Tito from Eliot’s Romola. Jameson’s close reading is, as always, extremely perceptive and his rigorous dialectic approach provides immense insight into the complex relation between the novel and the concomitant productive forces of capitalism. However, of the four case studies, the chapter on Eliot stands out above the rest, Jameson expertly drawing in the fact of Eliot’s own knowledge of German philosophy in order to `stand her on her feet’ and expose the Hegelianism at work in Tito’s `colloquy with himself’ (130).

Following on from this The Antimonies of Realism turns to the dissolution of genre, exemplified in the case of melodrama by Eliot’s lack of villainy, examining how the reifying story structures of realism entail their own destruction. In this dialectical process the new narrative approaches of realism then codify their new genre structures out of the remnants: the Bildungsroman, the historical novel, the novel of adultery and the naturalist novel. The simultaneous attempt to break free from meaning whilst continually being re-absorbed and solidified back into the intelligible, which was so evocatively expressed in linguistic terms in the chapter on Zola, here finds its expression in the structural forms of the novel as well. Here Jameson’s analysis of naturalism in particular has some of his most intriguing political arguments about realism’s conservativism, its `aesthetic need to avoid recognition of deep structural social change’ (145). In it he sees the naturalist form as depicting a kind of entropy of the individual, a decline and fall which functions ideologically as the bourgeois fear of a rising working class or their own descent into working class misery.

In the final chapters of the first part of the book Jameson then examines the use of pronouns and the emergence of a `swollen third person’ before a coda examining the work of Alexander Kluge in whose near-journalistic prose Jameson identifies a mode of realism without affect. In this narrative space the boundary between the fictive and non-fictive has been eroded and fiction has disappeared `as a meaningful narrative category’ (189).

The second of the book’s two parts consists of three almost discrete essays which chart the persistence of realist forms, focusing, in turn, on the concept of providence in realism, war and its representation and the impossibility of the historical novel.

Providence, Jameson argues, expresses Kant’s distinction between the empirical and transcendental by paradoxically placing the former in the power of the divine and the latter in the realm of human subjectivity. What emerges then is a space where the human subject appears to themselves as having complete freedom of action, whilst in fact every decision they make is pre-determined. This concept is secularised in Jameson’s reading, through Lukács’s conception of it as a unique synthesis of “world” and “soul”, of Goethe’s Wilhelm Meister, where `The Society of the Tower’ is discovered to be behind the plot’s seemingly chance occurrences. This is also a move from the individual to the collective. What Jameson does brilliantly here is develop this, once again using Eliot’s `web’ of collective destinies, to expose the inherently anti-political nature of the realist novel as a form. Its secular providence cannot conceive of the radical rupture of form or the possibility that what is, the realm of being, could be anything other than ontologically immutable (215). This conservativism is repeated in the concept of war and in the modern historical novel where, in both cases, Jameson too finds a dialectical relationship between abstract collective totality and the confusion of the subjective.

One of the most interesting aspects throughout Jameson’s analysis is his continual use of examples from classical music as a method of explanation. The examples are numerous (almost a symphony): Zola’s sensory autonomy is furnished by a correlative example involving the love potion from Tristan and Isolde (70); the language of protagonists is compared to that of opera (98); Tolstoy’s sustained tonality of distraction is contrasted against the modernist dynamics of Mahler (87); elsewhere the sonata form in relation to Goethe’s phantasmagorical unity (207), and, in one of the book’s most beautiful passages, the loss of protagonicity is draw into a parallel with the death of the gods and heroes in the climax of Wagner’s Ring Cycle (109). The accumulation of these references, allows Jameson’s own analysis to break free from its purely literary associations, cementing the notion that realism was the dominant cultural logic of nineteenth century capitalism.

The Antimonies of Realism is a book which seeks a deeper understanding of the relationship between the development of the realist novel and the societal structure of capitalism. His strong dialectical thought, which rightly sees the self-cannibalising and self-perpetuating nature of the antimonies such thought processes inevitably lead to, opens up the work of the Frankfurt school, in particular Lukács, to provide a picture of the novel of interest to anyone wishing to delve deeper into how art and society inform and are informed by one another’s progress.