Marx & Philosophy Review of BooksReviews‘This Changes Everything: Capitalism vs. the Climate’ reviewed by Nathan Wood 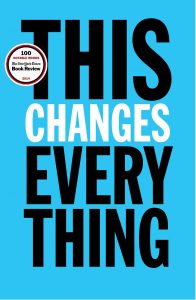 Naomi Klein
This Changes Everything: Capitalism vs. the Climate

Naomi Klein’s new book gives an insightful and thoroughgoing analysis of the connection between the crisis of climate change and capitalism. From the ideology of climate change denial to the variety of incredulous technological solutions, she provides a compelling argument for the strong connection between the neoliberal policies given free reign over the last 30 years and the rapid environmental devastation we currently face. This book is best understood as an extension of her earlier work The Shock Doctrine, insofar as she hopes that “climate change can be a People’s Shock, a blow from below” (10). In that book she chronicles the rise of “disaster capitalism” and its origins within CIA torture techniques, the purpose being to disorient the prisoner into a position of shock that makes them psychologically susceptible to comply with the interrogators’ demand for information or obedience. The shock doctrine is this individual process of susceptibility applied on a mass scale. On this doctrine the shock makes us more receptive to changes and it is Klein’s hope that the truth of climate change is shock enough to motivate radical revision of certain deeply held beliefs about society and the economy.

The facts, case studies, and statistics presented in the book are certainly shocking. It is not simply the fact that a 2 degree rise in global temperature (which we are on track to meet in 2017) will be the tipping point for our planet’s inevitable dissolution, but the stories of ecological destruction wrought by the coal, oil, and natural gas industries on cities, islands and even entire countries add to the shock. It would have been easy to write a scare-tactic book, but this book is balanced with optimistic accounts of various environmental movements which have made great strides in curbing fossil fuel expansion as well as success stories of cities and communities that have ‘gone green’ and are now better off. Another important contribution this book makes is to remind the reader how these environmental concerns are closely tied to social and economic justice. After all, those who are going to be hit hardest by the dramatic changes in climate because of the increasing frequency of hurricanes and super-storms as well as the increasing cost in basic necessities caused by food shortages are the poor. The wealthy are largely insulated from these changes and have the security and stability to adapt with little personal cost. Social and economic inequality is not merely a lifestyle question when confronted with climate change; it is also a matter of survival.

Given the positive elements of this book, it is important to note that it does not represent a Marxist critique of capitalism. Her recommendations in the book to increase taxes and penalties on the fossil fuel companies and to reinvest that money in solar, wind, and other renewable energy development do not fundamentally call into question the contemporary economic paradigm. They lie more in line with a progressive Keynesian approach to economic stability. However, her emphasis upon local development and community energy independence is something that many socialists will find appealing. One of the many interesting examples involves members of the Northern Cheyenne tribe engaged in taking their energy independence into their own hands through a program teaching them how to install solar heaters on their homes in the reservation. By achieving energy independence from the electrical company the members of the Northern Cheyenne tribe take an important and necessary step toward their independence from a livelihood dependent upon capitalist production. The high-cost electricity due to the very poor housing and living conditions on the reservation kept the community in poverty with high unemployment and, as Klein claims, that is the primary reason that opening up the reservation lands to coal mining was even considered as a serious option in that community. Marxists and socialists alike can surely agree that this energy independence means not only giving them the opportunity to strengthen their local economy by investing the money saved into their local businesses, but also prevents further domination from a dangerous and devastating coal industry. Through other accounts of how local communities have embraced renewable energy, Klein offers a hopeful path towards communal independence that should be of interest to anyone invested in weakening the monolithic and hegemonic instruments of Capital.

Klein’s reluctance to explicitly align her critique with Marxism is, all in all, not very surprising. The environmental movement has, on the whole, cast a fairly disparaging evaluation of the relevance of Marxism for understanding and resolving the problem of climate change. One prominent reason is the view that Marx endorses a kind of technological determinism. Thinkers such as Robert Heilbroner popularized this interpretation of Marx as committed to understanding technology as the ultimate source for economic change, whereas other Marxists, David Harvey for instance, accuse this interpretation of an oversimplification of Marx’s understanding of the relationship between technology and capitalism. Where Klein is most directly engaged with the concerns of Marxists is on this question.

Klein takes note of many attempts to escape the radical revision of the economic paradigm of capitalism that the environmental crisis calls for through the hope of some technological work-around that can allow us to adapt the environment to our lifestyle. A significant portion of the book is devoted to arguing that no such technological fix is available, nor will it really solve our environmental problems. She discusses numerous examples of how Capital has attempted to overcome the increasingly frequent environmental obstacles preventing “business as usual.” What many of the cases share is an attitude of “doubling-down” and forcing the technology to move along like a Kindergartener trying to force a square peg into a round hole. The book begins with a story of how in the summer of 2012 (which saw some of the most extreme heat in Washington, D.C.) her flight was unable to leave on time due to the wheels having melted into the tarmac. It was only a temporary delay until the airliner brought in the heavy machinery to tow the plane onto the tarmac and help it reach enough speed for takeoff. The answer to addressing the problems that out of control emissions have caused is paradoxically to burn more emissions. What makes this crisis for capitalism unique is that while there are economic, legal, and political limitations to how Capital can operate, they are nothing like the inherent limitations of the environment. Klein quotes Jeremy Grantham writing in 2012: “‘Capitalism, by ignoring the finite nature of resources and by neglecting the long-term well-being of the planet and its potentially crucial biodiversity, threatens our existence.’” But as Klein points out, “that doesn’t mean savvy investors can’t get very rich on the way down, both from the final scramble for fossil fuels, and by setting themselves up as disaster capitalists” (233). Therein lies the unique power of this contradiction. While the earth and its resources regenerate, they are not unlimited, and the earth’s capacity for regeneration is slowly impeded by the ever-widening reach of Capital. This terrifying realization fuels a disaster-capitalism that sees a ruined world as simply a new market opportunity.

The nature and extent of this contradiction in Capital is where the real interest in this book lies for Marxists. Klein makes a convincing case that capitalism is the clear culprit behind climate change. However, additionally it also provides evidence to the uniqueness and pivotal significance of the climate crisis for capitalism that Marxist thinkers such as John Bellamy Foster have argued. There are still critics of this view, most notably David Harvey in his book Seventeen Contradictions and the End of Capitalism, and this sets the stage for the connection between climate change and capitalism as an important debate that the Left cannot afford to ignore.