Marx & Philosophy Review of BooksReviews‘After the Beautiful: Hegel and the Philosophy of Pictorial Modernism’ reviewed by Sean Sheehan 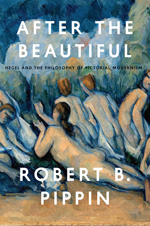 Robert Pippin
After the Beautiful: Hegel and the Philosophy of Pictorial Modernism

Robert Pippin seeks to understand modernism in its pictorial art form by looking at the paintings of Manet and Cézanne, the grandfather and father of modernism in the author’s family tree of art, employing Hegel’s 1820s Berlin lectures on aesthetics for their insights. Pippin’s starting point is the uncontroversial view that modernism displayed art no longer comfortable with its own form, beginning with Manet and Cézanne, before moving on to the geometric forms of Cubism and other avant-garde movements, and then abstract, non-representational art. With the two founding fathers, the beautiful is subjected to an interrogation from which it never recovers, and with this collapse we witness the crumbling of aspects of what the beautiful as an aesthetic ideal incorporated: a promise of the possibility of approaching something perfect and wonderfully whole, the embodying of a sensibility preciously worthy of human aspirations, a coming together of the intellectual with the affective and sensual. All this is rendered suspect by the economic and social dislocations occasioned by the restless and relentless dynamic of capitalist expansion that made itself felt more intensely in the nineteenth century than ever before.

Pippin’s desire to grasp the sea change brought about in art’s understanding of itself finds a compass-point in Hegel’s non-reductive link between art history and broader parameters defining a society’s identity. The Marxist equation between base and superstructure is finessed by weaving aesthetic intelligibility into the fabric of a larger, historically-bound set of social practices, wherein art becomes a mode of Geist’s self-understanding. Translating Geist as ‘spirit’ is misleading, with its suggestion of something immaterial, given that Hegel is referring to a collective subject, the soul of a society, rooted in nature but also a minded agent; and Geist’s struggle to understand itself is for Hegel necessarily historical in nature. More complicated than a Socratic self-examination, it possesses a communal dimension entailing a network of social norms, and this dimension takes shape as a result of social contestation, a struggle involving conflicting notions of freedom and power. We act, make decisions, have intentions, but not in some private, subjective way: to count as a deed – whether as an individual, or a work of art – something has to count as such within a community and, moreover, in a historical period marked by extreme uncertainty and change, understanding itself is subject to questioning. This will be reflected in how we feel about accepting a pictorial work of art and, within a great painting itself, by a refusal to remain an object for the beholder’s ready satisfaction.

Pippin goes further in this direction than Hegel did himself, though his explorations remain firmly inspired by Hegel’s reflections on how art springs from man’s ability to ‘double’ itself: ‘he [man] sees himself, represents himself to himself, thinks, and only on the strength of this active placing himself before himself is he Geist’. This involves a struggle to fashion and become who we model ourselves to be, a process of working out who we are, a self-constituting practice, not a voyage of self-discovery: Geist, Hegel says more than once, is ‘a product of itself’. He also saw art in his own time as becoming a ‘thing of the past’, but Pippin questions the validity of this conclusion, and finds evidence of a contrary and more complex view in Hegel that sustains his relevance for an understanding of modern art. Pippin looks at two passages from Hegel’s lectures on aesthetics, one describing man as an ‘amphibious animal’ (46) – a species for whom satisfaction is never simply granted – and another where art is seen to transform its work into ‘a thousand-eyed Argus’ (49), so that viewing it is more than a contemplative or affective act, becoming something interrogative. Together, these two passages suggest that under certain historical conditions the aesthetic nature of an artwork could be highly problematic, but this line of development is not pursued by Hegel so as to arrive at a clear sense of a crisis in the modern world about meaning. For Pippin, this is because Hegel places too much hope in ‘the gradual actual historical achievement of some mutual recognitive status’ – the ‘least plausible aspect of Hegel’s account’ (60) – but, like a loyal devotee who will not allow a short-sightedness on the part of his master to disqualify his overall achievement, he seeks to explicate what Hegel missed seeing within Hegelian terms, thereby confirming the value of his philosophical approach. Pippin claims a philosophical significance for their aesthetic achievement, but does so from within the affective domain of art, i.e. not by advancing the kind of cognitive knowledge-claims we associate with empirical or philosophical fields.

Pippin sets about his mission by first considering Manet’s ‘The Luncheon on the Grass’ (1863) and ‘Olympia’ (1863-5). The difficulty for anyone looking at these paintings is to know who the women are supposed to be looking at. There is an expressionless yet provocative edge to their looks that face out flatly but boldly towards the beholder; this renders them opaque, resisting any easy response, and inviting further questions: why naked at a picnic, why ignored by the bourgeois gentlemen, why include a black cat, flowers? The female face in each of the paintings looks out, making the spectator the subject of their gaze, drawing them in, even if only to dismiss their relevance. In painterly terms, there is no desire to create sensuality in the scenes depicted: ‘Olympia’s skin has nothing of Titian’s lush, pink, living quality’ (48). In short, this is not representational art as it was understood up to that time.

The upheaval in art inaugurated by Manet has been well covered, particularly by T. J. Clark and Michael Fried, and Pippin readily acknowledges this by devoting a chapter to them. He is drawn to what he labels their ‘left-Hegelian’ approach, because it throws light on the way platforms or ‘regimes’ (68) of self-representation have material origins based on the distribution and exercise of power, quoting Marx’s point in 18th Brumaire that we make history under material conditions that are not of our own choosing. Thus, as T. J. Clark observes, ‘Olympia’ is a painting of a prostitute, and it challenges not only the tradition of painting nudes, but also the bourgeois matrix of self-representation, sexuality and money. ‘Olympia’ is a depiction of exchange value, not a nude but a naked body for sale. Pippin, describing the Brecht-like distancing effect of the flatness and absence of depth in Manet’s paintings, robbing it of sensuous beauty, once more quotes Clark approvingly: ‘Flatness was constructed as a barrier put up against the viewer’s normal wish to enter a picture and dream, to have it as a space apart from life in which the mind would be free to make its own connections’ (78).

There is a final chapter on Heidegger’s perspective on art, different to Hegel in some respects, but equally attuned to the importance of history. For Heidegger, art is a disclosure of truth and the meaning of being, and while he agrees with Hegel about the decline in art’s value, he attributes it to an over-rationalized world in thrall to instrumental reason, making the subjectivization of art’s meaning the only marginalized space left available. Heidegger’s two famous examples in ‘The Origin of the Work of Art’ are Van Gogh’s ‘Pair of Shoes’ (1886), and the ancient Greek temple at Paestum: the painting of the shoes is to be admired not for its verisimilitude, but as a revelation of the world of the peasant, an ‘event’, not a ‘thing’, a ‘happening’ of truth; the temple being not merely of architectural interest, but also expressive of the Greek world, the Greeks’ ‘horizon’ of meaning. Such horizons of meaning – constitutive of the world into which the subject is always already ‘thrown’ – are not like Kant’s conceptual categories, but a practical world, where some things matter in a taken-for-granted manner (like Heidegger’s even more famous example of hammers in Being and Time). The temple was there for the Greeks to use, not to think about or consciously invest with meaning. It was a given. And a great painting like Van Gogh’s ‘Pair of Shoes’ also reveals a world, in this case a peasant’s world that Heidegger attempts to imagine:

From the dark opening of the worn insides of the shoes, the toilsome tread of the worker stares forth. In the stiffly rugged heaviness of the shoes there is the accumulated tenacity of her slow trudge through the far-spreading and ever uniform furrows of the field swept by a raw wind (quoted 108)

What becomes unconcealed is the being of this world: ‘the disclosure of what the equipment, the pair of peasant shoes, is in truth’ (quoted, 109). This is not art as mimetic realism, but as something that happens in the painting, and it brings to our attention the being-of-a-world that ordinarily lies resistant to disclosure, and which in the technology-driven modern world is in danger of being permanently closed off. Pippin uses Heidegger to explicate Cézanne’s paintings of bathers, fruit and landscapes: their mute stillness and density evoke a Heideggerian sense of the ‘presence’ of beings, ‘realizing’ their ontological significance (Cézanne’s word) in painting.

Pippin’s book is not an arduously long read (at less than 150 pages), but the text punches well above its book-length weight: not so much for insights into Hegel, but for its discussion of Manet and Cézanne’s paintings (usefully reproduced in colour). The leisurely prose and his agreeably relaxed approach is deceptive; behind the unperturbed manner of his delivery, a philosophical torque is being applied with precision. The account given of Hegel is consistent with Pippin’s many books on the philosopher and, to some extent, it helps to have some acquaintance with these, but what many readers will enjoy about After The Beautiful are its reflections on pictorial modernism, a wealth of footnotes worth following up and, most valuable of all, its suggestive ideas for a Marxist appreciation of art that goes beyond seeing paintings as merely an epiphenomenon of the historical process.