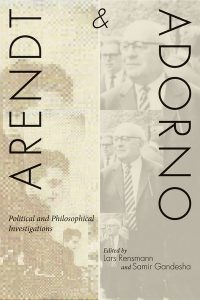 Theodor W. Adorno and Hannah Arendt are two of the most important and controversial theorists of the twentieth century. Lars Rensmann’s and Samir Gandesha’s Arendt and Adorno is the first and only existing English language collection of essays delving into the interconnections, overlaps, and disagreements within the respective oeuvres of these eminent German-American émigrés.

This review will explore the diverse essays in this collection, focusing on the especially noteworthy, controversial, and ones that would be most relevant to Marxist scholars. The review will conclude with an overall assessment evaluating the relevance of this collection as a contribution to both the philosophies of Marxism as well as radical Left politics more broadly.

At this point I want to emphasize that regardless of any specific critiques of individual pieces in this collection, the collection as a whole represents a profound contribution to contemporary political philosophy. The successful attempt to sketch the affinities and discontinuities between such seemingly diverse thinkers, who hated one another (though as the book points out, Arendt’s hatred was a bit more volatile and verbalized), should be seen as a model for future (edited) books. This book should be read by everyone interested in either thinker, especially in terms of their continued relevance into the twenty-first century.

The collection opens with a tightly-written essay by Seyla Benhabib on the similarities and differences between Adorno and Arendt regarding philosophical and political judgment. This essay focuses on how both thinkers embody a similar mode of theorizing similar to that alluded to in Walter Benjamin’s ‘Theses on the Philosophy of History’, what Benhabib calls their ‘Benjaminian Moment[s]’. Beyond this introduction – which is superbly done, and warrants being read again after one completes the essays as a kind of conclusion – Benhabib’s essay is the first of many arguments for a kind of openness and foundationless thought believed to be embodied in both Arendt’s and Adorno’s style of theorizing. The ‘Benjaminian Moment’ is a ‘moment’ in that it is only experienced in instances where these thinkers attempt to ‘think anew’ (33). For Arendt this is best represented in her concept of natality, and for Adorno in his critique of identitarian philosophy and reification more broadly. Contra Marx, according to Benhabib, the Benjaminian Moment is for Arendt and Adorno a kind of theorizing that breaks with tradition and moves towards a non-teleological utopia.

Next, J. M. Bernstein’s essay emphasizes the concept of political resistance in Arendt’s thought supposedly lacking in Adorno. According to Bernstein, resistance is embodied in Arendt’s understanding of civil disobedience as the adequate non-institutional means to disrupt the crises of authority pervasive to modernity. What this essay really is, is an Arendtian critique or reading of Adorno which misses what is politically valuable about negative dialectics. This uncharitable reading of Adorno is something that I believe to be true of Dana Villa’s essay as well, which criticises Adorno through Arendt for lacking a politics. The problem with this Arenditan critique of Adorno (which is not how Bernstein explicitly characterizes what he is doing) is that it is a misunderstanding of the non-identity of the political. A negative dialectical view of politics would look for the political in those places or moments where people don’t generally believe politics to be present. The non-identity of conventional politics or political resistance (of which I would say civil disobedience is the example par excellence) could be a film or music or any art, something which Bernstein emphasizes, but it also looks for the absence of politics or the negation of the political where we conventionally expect to find politics (e.g. in government or at a protest). We could look towards the self-defeating openness of Occupy Wall Street, for example, where some involved attempted to profit from or exploit the situation for their own personal enjoyment or benefit. In general, Bernstein’s reading seems much more charitable and sympathetic towards Arendt, and is fairly narrow when it comes to Adorno, but overall he is right to point to the dearth of explicitly political language regarding civil disobedience in connection with non-identitarian (negative dialectical) thought. Villa’s argument for an institutional understanding of politics, on the other hand, is completely contradicted by the following chapter written by Rensmann.

The next two essays written by Rensmann and Robert Fine respectively, tackle the question of how Arendt and Adorno fit into the diverse theoretical field of cosmopolitanism and debates around cosmopolitics (a term many prefer to the former ‘ism’). While it is commonly known that Arendt and Adorno vehemently opposed the idea of a world republic or state, and even the potentiality of international human rights to lead to any semblance of global justice, Rensmann’s essay argues (with a great deal of textual and independent support) for a cosmopolitical interpretation of these thinkers. Though I am skeptical of Rensmann’s claim that there has been a lack of serious scholarly attempts to bring Arendt into the conversation on cosmopolitanism – because this is precisely what Seyla Benhabib has been doing for over a decade, and quite successfully – I believe his argument shifts Benhabib’s to be more in-line with Adorno’s negative dialectical cosmopolitics (or what Rensmann labels ‘grounded cosmopolitics’). This is precisely where the originality of this piece lies. To suggest that Adorno’s thought is compatible with a kind of critical cosmopolitanism or cosmopolitics is a bold claim, but it is one that Rensmann does an excellent job explaining and justifying. Adorno’s thought is critical of liberal cosmopolitanism and the capitalist globalization of consumer culture (the culture industry), but not of an institutional structure that avoids a kind of totalizing regime privileging the status quo and the existent exploitative elites who benefit from manipulating the existing or feigned attempts at universalizing human rights in an international legal order. It is the dialectical interrelation of the particular and the universal, the emphasis on difference and openness that characterizes this ‘grounded cosmopolitics’, always aimed toward the reformulated categorical imperative of preventing suffering but also the extreme of genocide (141-2). This emphatically anti-genocidal ethic is one that motivates both Arendt and Adorno, a fact we find emphasized in almost every essay in this collection.

The importance of the experience of being Jewish in the early and mid-twentieth century, the Holocaust, and genocide in general are also central foci of the next two essays on the understandings and critiques of anti-Semitism in the thought of Arendt and Adorno. The last two essays address the meaningfulness of ‘the intellectual’ in society, particularly how Arendt’s and Adorno’s experiences as ‘intellectuals-in-exile’ shaped their views. Adorno and Arendt both viewed the proper role of the intellectual as elite in both value and responsibility, though certainly not superior in terms of moral worth or deserving of a good life compared to the rest of the population. There is definitely an interesting similarity to Lenin’s conception of the ‘vanguard’ that would be worth exploring further.

What makes this collection memorable and worth re-reading, to say nothing of the scholarly debates it contributes to, is how it brings these still widely underappreciated thinkers into the new century, a century in which there are new and ever constant threats of homogenization and even liquidation. Covering a range of topics from aesthetics, subjectivity, agency, cosmopolitics, anti-Semitism and post-foundationalist thinking, this collection of essays is of interest to all thoseconcerned with radical democratic politics. It is not a text that speaks explicitly to Marxism or Marxists, but it is still quite relevant to the philosophical debates that persist within Marxism and among Marxists. In this reviewer’s estimation, the most novel contribution made here is recharacterizing Arendt and Adorno as reluctantly modern critics of modernity, whose bodies of work are replete with examples of calls for openness to new ways of thinking, of new ways of imagining political worlds. As pessimistic or cynical as they are, this volume expresses the valuable contributions Arendt and Adorno make to thinking contingently, ethically, and beyond the status quo. I find this scholarly contribution most evident in the chapters on cosmopolitics and human rights.

Cosmopolitics already is, and will continue to be, the politics of the twenty-first century. How we, as an emergent and often antagonistic global community come to deal with our common problems, alongside and against our particular concerns and cultural perspectives, will dominate the next fifty to hundred years, if not beyond. Thinking the particular as universal and the universal as always particular will be the dialectical mentality necessary for successfully addressing the drastic changes our world faces. Rensmann’s and Gandesha’s Arendt and Adorno, in sophisticated and experimental fashion, provides a primarily academic audience with a much needed addition to the current debates (or more often lack of debate) between Arendtians and more classical Frankfurt School critical theorists, as well as an inspiring introduction for those who have only recently become interested in these thinkers. Those who consider themselves traditional or classical Marxists, Leninists, Maoists, etc., will not find much to agree with here, but perhaps that is precisely why it would be worthwhile even for them to pick up. With the failures of past (even vaguely) Marxian or Marxist attempts at emancipation, the interconnected and diverse calls by Adorno and Arendt to think and act differently in the face of suffering and the silences of political repression within an exclusionary and totalizing society, represents a mentality of praxis and utopia. This book provides ten excellent essays in support of Arendt’s and Adorno’s calls.