Marx & Philosophy Review of BooksReviews‘We Make Our Own History: Marxism, Social Movements and the Crisis of Neoliberalism’ reviewed by Andrew Rowcroft 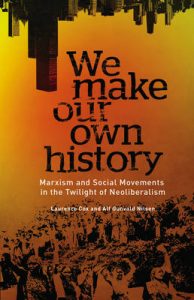 Laurence Cox and Alf Gunvald Nilsen
We Make Our Own History: Marxism, Social Movements and the Crisis of Neoliberalism

With the seemingly sudden explosion of a new wave of strikes, riots, revolutions and occupations, the first decade and a half of the 21st century has raised a number of immediate questions about how exactly to conceive the relationship between radical philosophy and provocative politics. To take just one example from a litany of longer-term trends, the staggering revelations of banking maleficence that have been exposed in the wake of the most recent neoliberal disaster demand an authoritative and thoroughgoing assessment of social struggle ‘against [seemingly] overwhelming odds’ (vi.).

In We Make Our Own History, Laurence Cox and Alf Nilsen set out to reclaim Marxism as a theory of social movements and to position it as a method still relevant to reading the deep economic structures that govern inequality and global oppression. However, rather than an exposition on the state of contemporary Marxism, and its theoretical and political heritage, their ambition is an altogether bolder statement of purpose: one seeking to free activists ‘from the disempowering versions of “theory” that tell them how impossible change is’ (6). Cox and Nilsen, then, self-consciously attempt to resituate – or in their parlance, unfreeze – the activist element inherent within critical thinking by attempting to position Marx within a humanist framework, and to shift the balance of emphasis from an interest in social structures and formations to the conflictual encounters of movement struggles. The book is a valuable contribution to the growing field of social movement theory, clearly written and cogently argued.

The central proposition throughout this work is that theory should not be detached from praxis, an argument borne out for Cox and Nilsen primarily by personal subjective experience. As both theorists make clear within the opening pages, they did not come to discussions about Marx and social movements as Marxist intellectuals, but arrived at these questions as movement activists seeking productive theoretical tools to aid their knowledge of social change. As such the book is often heavily informed by their own activist experience, which does not lack for detail, cutting across ‘ecological campaigns, international solidarity, community organising, anti-war activism, radical media [and] workplace struggles’ (ix). Such an approach often adds a vital energy and dynamism to some of the more difficult theoretical passages that come at the mid-point of the book. This is of course a central problem of such a work: while promising to offer ‘something helpful to activists in terms of telling us what to do, what to expect, and how to win’, it is sometimes difficult to see the more prescriptivist elements of movement theorising, at least in this account. One sometimes feels that the modes of resistance Cox and Nilsen champion are therefore occasionally guilty of the very institutional sterility that they seek to displace.

The book is well structured and clearly organised, made up of five main chapters that gradually build in length, each beginning with a statement by Marx to inform its overall content. Chapter One introduces the theoretical framework, specifically how theory can emerge from activist experience, and how Marxism can be productively rethought as a ‘one form of movement theorising […] with particular advantages but serious gaps at present’ (xiii). For these authors, theory is not ‘necessarily a scholastic exercise [nor] necessarily produced in academia’, but formed in and through ‘ordinary people’s efforts to make sense of and change their social experience’ (8). Such an approach, at least for this reader, appears perfectly valid, with the attempted decoupling of theory from the rigid confines of academia an admirable effort. Proposing that recent protests, campaigns and movements across the globe constitute a new historical wave – a veritable ‘movement of movements’ – against global capitalism, the authors contend that such a series of developments heralds the loosening of the grip of US geopolitical control, while simultaneously prompting considerations of what comes after.

For Cox and Nilsen, to work within such a movement it is essential to move beyond critique and celebration and this, they propose, is what (Marxist) theory can productively offer. Thinking forwards and beyond the current situation thus enables more dynamic modes of social activism, forms that can ‘identify perspectives that help us develop our practice, form alliances and learn from other people’s struggles’ (4). Calling for a more credible relation between theory and praxis, between forms of understanding and distinct modes of political transformation, the authors seek to return Marx to a vibrant political activism, one made relevant by the challenges it poses through inciting forms of social practice and activism. Most interesting here is their reading, albeit brief, of the many institutional challenges such a proposition faces. Within the academy, Marx has come to inherit a complex and confusing vocabulary often incomprehensible to outsiders, and primarily exists as a form of cultural capital whose mode of resistance is employed as a short-term strategy. Such a ‘series of strong pressures’ towards a distinct academic mode of intellectual production means that ‘activist thinking is largely outside the formal languages of particular disciplines and fields’ (12).

The following chapter begins with an explicit reminder that Marx’s intellectual production, despite recent readings which prioritise its method of structural analysis, was not fashioned for academia but for the real and practical struggles of his period. Dealing with a ‘praxis-orientated Marxism’, this chapter attempts to return to the original guiding threads of Marx’s writings, while arguing for a number of key changes in historical perception. For Cox and Nilsen, the achievement of Marx and his writings is ‘a movement away from the isolated thinker towards a much broader nature of human economics’, and therefore his interest in human capacities and needs means that ‘human activity – praxis – is always and everywhere the case’ (30). Proposing that the political agency of elites which constitutes Neoliberalism demands to be read as a social movement from above, the authors argue that such awareness empowers movement activists to renew various forms of social struggle.

Chapter Three is the hardest-going, with the authors reserving their most dense and complex theoretical contentions for this part. Taking issue with established movement theory, they argue that social movements need to be presented as not a ‘marginal rejection of order’ but the ‘central forces fighting to control the production of society’ (57). Despite the density, the section is well-handled. Rejecting structuralist Marxism(s), social movements are posited as ‘animating forces’, not simply of political discord, but fundamental to ‘people’s lives, needs, experience, relationships’ (57).

It is in the penultimate chapter that the authors offer a long historical excursus on the nature of anti-capitalist struggle, encompassing primitive accumulation and the peasant revolts, early bourgeois revolution and an analysis of capitalism’s changing historical forms. Once again the narrative is clear: social movements and human practice are clearly interwoven to articulate a narrative of 19th century capitalism as shaped by collective agency and social movements from above.

Finally, as expected in a book on Marxist theory and social movements, the conclusions will please some and frustrate others. After detailed analysis and insight throughout, this section is the weakest, although this reader is particularly supportive of the authors’ contentions. As someone, albeit in a small way, interested and engaged in modern protest movements, this book forces reflections on the future of social movements but falls short in terms of practical political action; less blueprint than style-guide. While Cox and Nilsen declare that is not their primary intention, one can’t help but be left with the feeling that the book could benefit from more of this analysis. Despite minor criticisms, then, We Make Our Own History is indeed an important book, one that makes a number of valid contributions while identifying fertile area for future study. It remains of solid value to those looking to research the intersections between contemporary Marxism and the new wave of social protest movements in the 21st century.