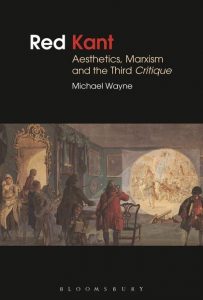 In the late 1970s when Antonio Negri found himself imprisoned on trumped up charges, he turned to Spinoza. In a context of the defeat of the autonomous movements of the time, Spinoza helped Negri find a new way forward in thinking about politics and collective subjectivity. Nearly 40 years later Mike Wayne has written a book arguing for understanding Kant as an important precursor of Marxist theory. Wayne thus proposes to rescue Kant’s aesthetic theories from the confines of bourgeois interpretations, as well as from competing Kantian-Marxist formulations, both of which he argues fail to appreciate the way that Kant’s Third Critique is a significant break from his earlier work, rather than merely a logical continuation of it.

One might be tempted to ask what are the stakes of going back to Kant in this manner? What is the value of returning to Kant? And given that Wayne is working in a context of media studies and performance (rather than philosophy), what does this return to Kant do that could inform current artistic and cultural production? There are interesting ways this background informs his interpretation, such as when he compares Kant’s model of consciousness to Hollywood modes of film editing (34). Or one could think about the influence of the participatory theater and cinema work he has been involved in, such as the directing of the film The Condition of the Working Class in 2013, based on Engels’ book of the same name. But that is not discussed here, even if it likely plays a role in what has led Wayne back to Kant. In this text Wayne argues that aesthetics can play a quite key role for social movements and radical politics, one that will assist in “reconnecting those components of our being that have been fissured by an evolving capitalist system” (1). While it is quite common for accounts of Kant’s aesthetics to push them away from the social, Wayne argues on the contrary that in the Third Critique they can be read as an attempt to reach to the social in ways that were not possible for Kant in his earlier work.

In this attempted rescue mission Wayne engages with an extensive range of secondary literature that has shaped the reception of the Third Critique and aesthetics more broadly. These sources include work by Deleuze, Kojin Karatani, Steven Shaviro (working between Deleuze, Whitehead, and Kantian aesthetics), Bourdieu, and Rancière. Deleuze, for instance, inverts the usual reading of Kant’s work by suggesting that the Third Critique should be read as foundational for understanding the first two, rather then the other way around. While Wayne is broadly sympathetic to readings that emphasize the importance of aesthetics in Kant’s work, he wants to do this in a distinctly Marxist manner. Thus he carries on a time honored tradition where it is often those closest to one’s own position that are subjected to more intense critiques. This staking out of Wayne’s position is done through taking key Kantian concepts and arguing that they resemble or prefigure concepts later developed within Marxist thought. For instance arguing that Kant’s notion of subreption can be understood as a precursor to critiques of commodity fetishism. Likewise he argues that the concept of reflective judgment “bears more than a passing resemblance to the project of historical materialism” (86). Not being a Kant specialist I cannot evaluate fully whether Wayne’s interpretation of these concepts, and of the Third Critique more generally, is entirely convincing, at least within the broader and immense terrain of Kant scholarship. While writing this review I decided to audit a masters level module on the Third Critique, given that previous to this I only had a rudimentary grasp of Kant’s aesthetics rather than a full reading. Several months later I can only say that gaining a full understanding of Kant’s aesthetics would take a much longer period of time, and thus am thankful for Wayne’s excellently written overview and reframing of these materials. Overall I find reading the account Wayne develops here to be an interesting and compelling one, and one that I find convincing.

However, its value is more in the ways it opens up possibilities for rethinking what aesthetics can do, what it makes possible, more than in finally arriving at some more accurate interpretation of Kant. This would be the stakes of formulating a Marxist reading of the Third Critique: exploring what resources a new approach to aesthetics would create for the work of critique and politics in the present. As Wayne admits at several points in the book, there are good reasons why Kant’s work has been interpreted as it has been within liberal and Marxist traditions, which he does not deny. Rather he argues there are sufficient reasons that the account he gives of Kant as a proto-Marxian dialectical thinker is a more compelling, satisfying, and ultimately a more useful reading of Kant’s work. It will make possible a greater appreciation of the “potential for the aesthetic to act as a site of resistance to or circumnavigation of reification” (77).

This could indeed play useful role, especially given the popularity that forms of social practice and participatory arts have achieved in recent years. While there have been many attempts to rethink the aesthetics of such practices, for instance through the development of relational aesthetics, or the interest in Rancière’s work on the distribution of the sensible, Wayne’s return to Kant provides other ways to approach and deepen this work. It is interesting that Rancière’s later writings on aesthetics are often read as a break with his earlier writing on labor and the history of workers’ movements. Wayne’s exploration of Kant’s work as proto-Marxist can gesture towards ways in which they do not need be understood separately, even if he wants to disagree with certain elements of the way that Rancière understands Kant.

Wayne admits that the most difficult part of reading Kant in the manner he proposes centers around the concept of disinterested judgment, which Kant makes a necessary basis of aesthetic judgment. This, Wayne argues, is where Kant as a bourgeois thinker can most clearly be seen. This is precisely the argument that Bourdieu develops in his elaboration of concepts such as habitus, which highlights the ways that judgment is shaped and determined by class factors. Wayne proposes instead to use Kant to develop an approach that thinks the relationship to class-interested practices but without reducing aesthetics to being only an expression of class interests. He does this by revisiting and reworking Kant’s key concepts. As an example, in this manner of reading, the beautiful becomes “a code word for thinking about a more authentic social being than can be articulated by either nature/civil society or the moral-political command” (95). Wayne makes similar moves with the concepts of disinterestedness (which “opens up a social being that is intersubjective and based on communication,” 95), or “purposiveness without purpose,” which “could be read as Kant’s emergent concept of non-dominative sociality” (96).

This sort of reworking of Kant’s key concepts makes possible a much different engagement and application of Kant’s ideas. Nietzsche in his critique of Kant’s work in Beyond Good and Evil famously asked what makes a prioi judgments possible. Marxist treatments of Kant’s aesthetic would likewise be inclined to ask how the forms of judgment and thought Kant proposes are possible. Wayne’s engagement with Kant’s work shows that it is through the development of forms of sociability and further socialization that this operates, rather then through abstract and transcendent categories. In this framing aesthetics and taste become a development of the social rather then apart from them. Wayne does not just argue that Kant’s concepts can be read as proto-Marxist, but also that they are most usefully developed further by taking them in a more explicitly Marxist direction.

Of particular interest here is Wayne’s attention to Kant’s discussion of labor in relationship to aesthetics, which here is described as “nothing short of a revolution in philosophy” (139). This comes through Kant’s introduction of art as a form of work, as distinguished to that which is produced by nature. Wayne argues that this prefigures how Marx will differentiate the work of the bee from the architect in Chapter 7 of Capital. In both versions labor is connected to imagination, and thus through that of expanding what it possible via the free play of the faculties (in the Kantian version). In Wayne’s Marxist reframing of Kant’s work, the play between understanding and imagination operates “not as a model for an internal cognitive psychological approach but as a model for grounding the aesthetic in production, in labor and in our metabolic exchange with nature” (160).

In Red Kant Mike Wayne has provided an interesting and compelling Marxist interpretation of Kant that breaks with much of the history of how he has been received and worked with. Wayne argues that Kant turns to the aesthetic to address problems encountered earlier in the building of his philosophical system. Whether or not this is the case, through Wayne’s interpretation of Kant, aesthetics is opened up as another space to continued working through what is here described as the “dialectical mediation between the experiential and the structural” – or where the “aesthetic experience reopens the potential malleability of the social order” (201). This ultimately is what is of interest in revisiting Kant’s work and concepts such as disinterested and reflective judgment: to work through a process of socializing aesthetics experience and understanding how “the aesthetic helps socialize us, how that is it encourages our sociality in a society that thwarts it by division and domination” (216). The reformulated Marxist version of Kant points to new ways to develop aesthetics in new and different ways.