Marx & Philosophy Review of BooksReviews‘The Re-Enchantment of the World: The Value of Spirit against Industrial Populism’ reviewed by Christian Lotz 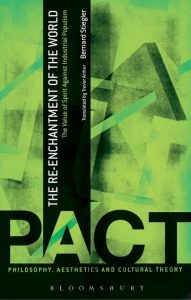 Bernard Stiegler
The Re-Enchantment of the World: The Value of Spirit against Industrial Populism

This new translation of one of Stiegler’s shorter books presents the motivations and theoretical assumptions behind and contained within the Ars Industrialis project that Stiegler founded with others in Paris around a decade ago. Ars Industrialis aims to reflect upon our current political, social, and economic situation and is charged with coming up with solutions to the current dead end of capitalist social production, which Stiegler no longer conceives of in a Marxist language. Instead, his philosophy is based on the idea that technics and humanity belong together intrinsically and that the human, through its externalizations, is necessarily conceived of as the prior “outside” of the mind and the body, which Stiegler calls “prosthetic.” In particular, Ars Industrialis tries to develop new strategies for pushing the core elements of cognitive capitalism towards a healthier future, and it is charged with developing new “technologies of spirit” as well as a new politics that emerges out of the analysis of contemporary consciousness industries. The concept of knowledge thereby plays a central role, which allows Stiegler to incorporate a large amount of source material from philosophy, sociology, psychology, and the contemporary sciences.

Through the inclusion of the Manifestos The Re-Enchantment of the World gives the English speaking community a better idea of the founding years of Ars Industrialis and its development of projects that emerged between 2005 and 2010 (when the 2005 Manifesto was updated). In addition, this small book contains two articles by Stiegler on the failures of our current system, on new foundations, and on the “value of spirit,” as well as a brief Manifesto adopted by Ars Industrialis after the global summit on societies of information in Tunis in 2005. The most telling and most transparent text is undoubtedly the Introduction to the volume itself, in which Stiegler presents a brief outline of its central claims and concepts.

Though Stiegler’s writings are at times very difficult, due to his excessive use of technical terminology, the focus of his book seems to be located in his claim that the center of our contemporary capitalist world should be seen in the control, discipline, and production of “brain time” through industries that take over the entire human mental apparatus. This leads, according to Stiegler, to the control of consumptive behavior and to a channeling of all psychic desires (1) towards extended consumption, with the consequence that the consumer becomes manufactured (2). In turn, we are becoming increasingly “stupid” and short circuited through the “total absence of thought” (68), which finally leads to the destruction of true knowledge and memory, insofar as our mental life becomes “proletarian” through the externalization of memory. The most troublesome consequence, according to Stiegler, is the reduction of knowledge to information, i.e., to a controllable, calculative, and manipulative form of knowing (23). Through its total externalization, memory and imagination become objects of (financial) investments (88) and can be manipulated without the resistance of self, rationality, and consciousness. True judgments, as one’s own judgments (70) and as critical judgments (72) are, accordingly, becoming increasingly difficult. It is as if Stiegler expands Hannah Arendt’s analysis of Eichmann to our entire culture. Capitalism, for Stiegler, is a system that replaces intelligence and responsibility “with the time of gregarious audiences, of brains without consciousness, and nervous systems transformed into reflex systems, which is to say systems of drives” (4). By means of the externalized human mind and through the increasing control of the brain, humans are deprived of what was once taken to be the core of their existence, namely, autonomy, (self-)consciousness, and rational judgment. Put in Stiegler’s own prose, “the hyper-solicitation of the attention and the senses which has here reached its summit, is what short-circuits transindividuation, derailing the process of identification, having as a consequence dis-identification, that is, the disindividuation of the collective as well as the psyche, from which there results insensibility and the loss of all forms of attention, that is, the loss of all forms of urbanity, of ‘politeness’ and civility” (57). Stiegler’s apocalyptic vision of the present, consequently, ends in his existential diagnosis that the younger generation “lost the feeling of existing” (58). The existential and civilizatory crisis, according to the author, leads to the “demotivation of producers, as well as consumers, which is the concretization of the ‘drop in the value of spirit’ – which is just as much to say, the loss of the spirit of capitalism” (67).

Since the center of human existence is no longer located in an independent, individual, and autonomous desire to overcome the present condition, Stiegler argues for the recovery of a new value of spirit and a re-enchantment of the world. By “spirit” Stiegler refers to the human capacity “of imagining and concretizing alternatives” (68) in a different, non-isolated, form of social organization. What the latter exactly entails, however, remains unclear, as everything that Stiegler tells us about this new spirit is expressed through empty placeholders, such as raising ourselves above the given, waging a “battle against regression” and engaging in a “conquest of the best over the worst” (71). Despite the abstract nature of these suggestions, it is clear that this new spirit and its new culture, which is based upon social knowledge and “collective intelligence” (75), must be based on technology, since for Stiegler, the human is itself constituted in “technics.” Accordingly, even the new spirit is in need of new forms of “instrumentation” (73) and so it seems that for Stiegler, the future is still to be sought in an industrial mode of production and consumption. Unfortunately, however, and in accordance with the abstract nature of Stiegler’s suggestions, we do not learn how we are supposed to connect this new industrial world (82) with the overcoming of the consumer society, given that Stiegler argues that the consumerist economy cannot last; for “as the organization of an innovation founded upon disposability, waste, carelessness, and blindness, it is in contradiction with the future” (23). The only example of this new social world and “cooperative instruments of forms of knowledge” (92) is Wikipedia (87).

Overall, Stiegler’s reflections remain extremely abstract and empty of any concrete content. The lamentation about the current dead end of our system is rarely accompanied by any concrete analysis of social relations, power relations, political opportunities, or of the capital/labour relation. Though Stiegler seems to call for a political economy (7, see also his For a New Political Economy (2010), reviewed here), it is nowhere explained how this is linked with his concept of technology and the renewal of the value of “spirit.” The control and discipline of labor, for Stiegler, seem to evaporate in mind/brain control through consumption behavior control. He thereby fails to analyze the dialectic between production and consumption, as well as the role that money and capital play in this dialectic. Moreover, Stiegler’s entire discourse is framed by a subtle return to Kant, the enlightenment, and a reform based social-democratic way of thinking. The position that Stiegler puts forward is at its core idealistic and ethical, which is indicated by his stress of concepts such as responsibility, care, spirit, and education. Though he claims that the “age of consumption” (3) ought to be overcome, it is not clear how this can be reached without substantial ecological shifts in production and society. Similarly, he has no real vision of a political and revolutionary movement that pushes this agenda forward. The call for a “new, qualitative growth” (3), a “new spirit of capitalism” (6), and the invention of a “new industrial model” (6) often sound like a new enlightenment program behind which the real restructuring of our societies and overcoming of the entire system becomes veiled, even if the new organization of knowledge aims at a socialization of new technological possibilities (24) and is intended to be based on a “politics of decentralization” (63). Authors such as Yochai Benkler and his The Wealth of Networks can tell us more about what this would entail within the given network society than Stiegler’s apocalyptic analysis of the “enslaved spirit” (33).

Stiegler’s writings after his impressive Technics and Time are at times repetitive, but, nevertheless, this small volume functions well as an introduction to his thought over the last decade. In addition, by pointing to the technological setting of human capacities and their mental apparatus, Stiegler’s ideas can trigger new ways of thinking about the culture industry that extends the analysis of consumption beyond the realm of entertainment and consciousness towards industrial technologies and media systems, which is welcome.