Marx & Philosophy Review of BooksReviews‘Lectures on the Will to Know: Lectures at the Collège De France 1970-1971’ reviewed by Michael Maidan 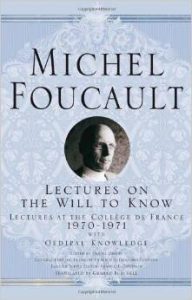 Michel Foucault
Lectures on the Will to Know: Lectures at the Collège De France 1970-1971

This book is the English translation of the lectures given by Foucault in the 1970-1971 academic year in the Collège de France, together with some closely related materials. The editors changed the original title to Lectures on the Will to Know to mark a difference with the similarly titled volume one of the History of Sexuality.

Foucault was elected in April 1970 to the Collège de France. The lectures included in this volume were given from December 1970 through March 1971. Also included in this volume are the “Course Summary”, written by Foucault after finishing the academic year, two contemporary lectures, one on Nietzsche and one on Oedipus, and a “Course Context” prepared by Daniel Défert. The editors also added a detailed list of contents for each of the lectures, and numerous notes, bibliography and an index.

The general subject matter of these lectures is the question of truth and its relationship with knowledge. What is at stake is the Kantian model, with its clear cut distinctions of subject, object, facts, categories, and truth. Foucault intends to show that this model far from being evident is the contingent result of a series of political and social struggles and transformations.

The lectures can be divided into two groups. The first four oppose the Aristotelian and the Nietzschean approach to knowledge and truth. Foucault unpacks the hidden implication of Aristotle’s claim that knowledge is natural to man, which obfuscates the role of desire in knowledge, and the transgressive aspects of knowledge. In Aristotle, truth mediates between knowledge and desire. Truth, explains Foucault, plays three roles: (i) ensures the transition from desire to knowledge; (ii) establishes the precedence of knowledge over desire; (iii) gives rise to the identity of the subject in desire and knowledge (24).

Foucault finds in Nietzsche an alternative interpretation of knowledge, one in which knowledge is an event in the surface of processes that do not belong to the order of knowledge. Nietzsche delivers “the desire to know” from the yoke of knowledge, acknowledges the desire at the root of knowledge, and the struggle of instincts and desires which are hidden in the Cartesian subject. To capture this aspect of knowledge, Foucault proposes to make a distinction between savoir and connaissance—indicated in the translation as knowledge-savoir, and knowledge-connaissance respectively—which he had already presented in the Archaeology of Knowledge. In this text, connaissance refers to the unity of will and savoir in knowledge, whereas savoir is what we need to drag from knowledge in order to rediscover in it the object of a desire, etc. (17). This is developed further in the next two lectures that address the Sophist.

The remaining eight lectures relate—uncharacteristically for Foucault—the emergence of the will to truth to societal and political changes in archaic Greece. Foucault begins his journey exploring what “truth” might have meant in Homeric times, when “truth’ was not something that one says, but something one confronts, like in an oath proffered by one of the disputing parties whose only guarantee is the eventuality of divine punishment. Righteousness (dikaion) first found in Hesiod’s evocation of the misfortunes that affect the city when justice is not delivered according to its principles, is eventually applied to economic transactions. Justice is identified with a “measured” system, a cosmological order and social order based on the idea of cycles, restitution, measure, and the right moment (the moment when the debt must be repaid). Foucault mentions changing economic and social relationships as the basis for the changes in the notion of justice (107-8). He refers to calendars, debt, measure, etc. (108). Truth originates in this emerging new conception, in which judgement discloses or remembers things, imposes decisions, exercises sovereignty. A decision of justice is a just one because it remembers the measure and time, and likewise, any action or person who remembers the measure and the time will be a just one. Justice becomes not only a quality of judgement, and by extension of the Judge or Sovereign, but is applicable to any man. This is how “to be in the truth will be more to be in the just than to be in power” (120).

Money is also part of this story. Money is introduced in Greece as part of a complex play of political and social reforms, which includes the redistribution of land, a partial solution of the question of debt, and taxation of the highest incomes to finance public works and to favor the artisan class. Foucault rejects—in a rare explicit quote of Marx—the idea that money was introduced “in the exchange of products”. Money in archaic Greece was neither a “sign” nor a “symbol”, but a “simulacrum”, a “fixed series of superimposed substitutions” (141), organized according to a redistributive sacrificial logic (141-2). This is further exemplified with references to the work of Solon in Athens (143). Truth becomes associated with these concepts not as a form of representation of reality: “It is not because it measures things quantitatively that it states a truth, it is because it excludes excess that it allows them in their value and to display themselves in their truth” (144). Following the discussion of money, Foucault explores the concepts of nomos (law) and of purification, and resultant development of the individual and of the social as an area of political intervention (181). Impurity imposes the need (or the will) to know whether a crime has been committed, by whom, etc. Impurity is having ignored voluntarily or involuntarily the nomos. But impurity is also to be blind to one’s own unlawfulness. Knowledge appears as an intermediary. To be able to state the law, one must not be impure. He who is impure cannot know the order of things. But in order to be pure one must know the law (188). This triad is the origin of a whole “ethics of truth” (189).

The “Lecture on Nietzsche” is based on notes for a conference delivered by Foucault at McGill University in April 1971. In a central passage of the lecture, Foucault states that using Nietzsche as a point of departure makes it possible: (a) To speak of signs and of interpretation without making reference to Phenomenology; (b) To speak of signs without reference to Structuralism; c) To speak of interpretation without reference to an original subject (Hermeneutics); d) To connect analysis of systems of signs with the analysis of forms of violence and domination (i.e., to dispense with Marxism and with the theory of ideology); (e) To think knowledge as an historical process before any problematic of the truth, i.e., knowledge liberated from the the subject/object relationship (knowledge-savoir) (213-4). Foucault is naming here the main philosophical movements competing at that time in the French intellectual scene, including—according to Défert—Heidegger’s interpretation of truth as developed in On the Essence of Truth.

“Oedipal Knowledge” is the title of a lecture given in March 1972 in various universities in the United States. In an earlier form of this lecture (March 17, 1971) Foucault takes some time dismissing Freud’s interpretation of the Oedipus myth. In the latter version, Foucault observes that Oedipus’ tragedy involves the notion of recognition in two senses. The first, which is similar to the Freudian sense, is quickly dealt with. Foucault is more interested in a second sense of recognition, in which the passage from ignorance to knowledge takes place through the confrontation of different types of knowledge-savoir (230). What unfolds in the tragedy corresponds to the dismissal of tyrannical knowledge. For Foucault, Oedipus is a transitional figure between an older oracular and divinatory order and a new one based on testimony, memory and confession. These two orders are not only epistemologically different; they are part and parcel of different political realities.

The Lectures on the Will to Know add to our understanding of Foucault’s turn from Archaeology to Genealogy. Foucault will ultimately abandon some of the ideas contained in the these lectures, while others will be presented in a circumscribed way in the lectures given in Brazil in 1973, entitled Truth and Juridical Forms. He would eventually mute his endorsement of Nietzsche, and shy away from broad based philosophical interpretations of Western culture, preferring instead to stick to the study of specific episodes of the history of truth that he endeavors to uncover in these lectures.