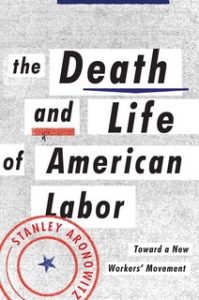 Stanley Aronowitz
The Death and Life of American Labor: Toward a New Worker’s Movement

Stanley Aronowitz’s latest book The Death and Life of American Labor: Toward a New Workers’ Movement is a luminous synthesis of a philosophical vision, politics, and history. His urgent aspiration is to help generate a discussion of what exists and what is to be done now! (12). The book will be appreciated and celebrated for its descriptions of contemporary labor politics rooted in historical labor movements and Aronowitz’s philosophical vision and call for renewed “radical imagination” from within labor politics.

Aronowitz contends throughout the book that American labor as a political force has been, since 1938 (56), “mostly defensive” (87) and nothing short of reactionary (34). The aim has been simply an attempt to minimize damage to previous legislative and historical accomplishments. The structure of the working class has been radically transformed and job (in)security has become precarious and often temporary (67), wherefore unions today fail to speak for the whole working class (119).

Unions where once underground, rebel, and outlaw social institutions and worker movements. Unions in the late nineteenth century became effective institutions for social change and personal well-being for working-class members (15-21). Not only were they concerned with wages, benefits, working hours, and working conditions (80), but broader cultural issues (81) concerning what constitutes a “good life” (116). “The real story of the past seventy-five years of labor’s journey is the successful subordination of unions” to the logic of capital (32). “Unions today are primarily what Louis Althusser once termed ‘ideological state apparatuses,’” employed to adapt labor pleas to the injunctions of capital (24).

Unions today are merely an appendage to corporate capital (82). They are prisoners to the neo-liberal logic of “management prerogatives,” whereby workers and their unions are prohibited from challenging investment and growth decisions of firms, implementation of technology, price policy, and profits (25). The mass psychology of neo-liberalism has conditioned labor leaders, workers, the poor, and the unemployed to passive cynicism and totally compromised labor relations to the dictates of capital (53).

The lack of radical imagination stifles our ability resist the noxious system of neo-liberal corporate capitalism.

The labor-management accord initiated by New Deal legislation has come to an end (56). The legislative and institutional framework established by the National Labor Relations Act of 1935 (7-10) now obstructs the ability of workers and their unions to confront successfully contemporary challenges created by neo-liberal policies, globalization, and strategies of giant firms, in a political economic environment that is anti-union and anti-worker (12).

Today, restrained by the lack of radical imagination, labor politics “are in a historical moment of one-dimensionality” (58). There are numerous reasons why union collective bargaining has become ineffective. First, and paramount, is the historic three-way bargain between unions, the state, and corporate capital. Legislation has constrained the actions of workers and their unions (78). Contracts have become forces of capital (21) and the dogmatic union support of the Democratic Party (125) has merely demonstrated that Republicans and Democrats are two traditional branches of neo-liberalism (53), with regards to labor policy (87). Second, as explained above, there has been a historical process of subordination of workers and their unions to the injunctions of capital (78). Third, technological innovation most often favors labor-saving reorganization in the workplace (110).

Technology has generated impressive historical improvements (107-9). The other side of technological change is a labor-saving reorganization in the workplace (78). For example, “[s]ince the early 1960s more than half of the industrial work force has been eliminated” (116) and textile production has declined by 80 percent since 1980 in the US (117). The failure to pay attention to labor-saving technology is among the most important weaknesses of US labor politics, and is symptomatic of a lack of radical imagination (127).

Labor’s failure in the last 30 years successfully to put up a fight can now be better explained. (1) Labor-saving technology has generated real anxieties and real threats of joblessness unless labor accepts the dictates of capital; (2) household debt and domestic financialization has augmented and intensified financial anxiety and fears of laboring classes; (3) the imperative of job “security” has many unions granting deep concessions to management; (4) unions have become a reactionary and conservative force attempting to minimize losses; (5) the lack of progressive politics and over-commitment to neo-liberal politics of the Democratic Party has led to the working-class losing faith in unions and a radical decline in unionism; (6) real anxiety and fear has marginalized the progressive, revolutionary, and socialist element of labor politics, manifesting a noxious marginalization of radical imagination and a virtual absence of concrete alternatives and Blochian not-yet utopianism (Bloch 1995).

The result has been the marginalization of unions as a political force and the degradation of skilled occupations to semiskilled status, wage stagnation and decline, an explosion of household debt, and growth in the number of poor, underemployed, low-wage and part-time workers (110). US workers are alienated from any robust sense of class consciousness.

In 1973 Aronowitz (409) warned his readers that “unions have all but abandoned the fight for decent working conditions, and, insofar as they are perceived as staunch defenders of the status quo in terms of the organization of work, they are increasingly looked upon as enemies” of the working class. Conditions have not improved but worsened. The working class lacks workplace organization, class consciousness, and collective class action.

Corporate capital well understands the importance of collective class action. Unions on the other hand have renounced class politics (20). Collective bargaining is effectually dead (103) and instead unions rely on “collective begging” (22). Worse still is a growing class of highly precarious proletariat, or the “precariat” of contingent, out-sourced, part-time, temporary, and regularly unemployed working class (105).

Today there has emerged a new type of class fight whereby large numbers of the precariat strata of the working class (39), now further including declassed intellectual workers and professionals with many years of higher education and advanced degrees, discover a workplace that does not hire them for their education. Instead they find only various service occupations where employment is precarious, often part-time, and rewards, income and benefits extraordinarily uneven (37). College graduates are waiting tables where tips are small and steady work almost nonexistent (68). The members of the precariat class are commonly enduring both income and job anxiety (104).

Aronowitz spends the last two chapters on solutions and ideas for encouraging resurgence of a radical imagination. He contends that workers and their unions must emancipate themselves from the notion that they are merely wage and salary earners (44). Instead, as workers we need to understand ourselves as partners in the labor process with cooperative rights (140). We are full members of communities with the right to make demands on capital and businesses that chose to participate in our communities. “We could start by socializing the giant banks” (154).

In line with historical labor movements, Aronowitz urges political commitment to reducing working hours, instituting a Basic Income Guarantee (BIG), and demanding a $15 minimum wage (141-3). The new labor movement must also take seriously the question of workplace democracy (145-8) and cooperative commonwealths (148-51). Aronowitz further insists that the new labor movement must embrace a commitment to defining the meaning, and participation in the institutionalization, of “the good life” (140).

Full citizens, in search of the good life, have the right to engage politically in a demand for well-run public schools (144), universal healthcare (152), adequate food and nutrition (155), sustainable natural environments (171-2), decent housing, effective mass transit, and recreating the conditions for the realization of the American Dream (144).