Marx & Philosophy Review of BooksReviews‘The Divine Left: A Chronicle of the Years 1977-1984’ reviewed by Daniel Barnes 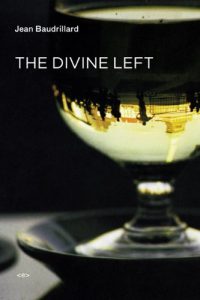 Jean Baudrillard
The Divine Left: A Chronicle of the Years 1977-1984

The Divine Left is Jean Baudrillard’s account of French political life in the years from 1977 to 1984. Comprised of fragments written in real time, the book is a compelling constellation of observations on a few crucial themes: the death of power, the replacement of an intellectual class with hyper-professionals of the spectacle, a biting critique of socialism, and the simulation of politics. In the wake of the so-called ‘war on terror’, Baudrillard has a stark message for contemporary Europe, with a freshness and relevance that he did not perhaps anticipate. He concludes that history been deferred until socialism has lasted long enough in the empty stratosphere of the political to pay its debts, which now has an uncomfortable irony in the century in which the simulation of politics created an ugly piece of history.

In July 1983, Max Gallo, government spokesman for the Socialist Party, wrote an opinion column in which he condemned what he called ‘the silence of the intellectuals’. Baudrillard immediately published a response in Le Monde, a revised version of which, ‘September 1983: The Divine Left’, forms the centrepiece of this book. Gallo accused France’s intellectuals of betraying the noble tradition of Gide and Sartre by declining to play a role in politics. Baudrillard formulates the context of The Divine Left by turning the accusation around: ‘We must turn the question posed to the intellectuals back on the political class. It says to them: where is your virtue, where is your conscience, where is your energy?’ (81). For Baudrillard, politics has rendered intellectuals unable to feel passion; for Gallo, intellectuals have betrayed their obligations. It is not so much an argument as it is a difference of opinion, and Baudrillard makes no effort to respond to the precise content of Gallo’s argument, which is nowhere mentioned or reconstructed; he treats it as an occasion for something other than an invitation to a good old-fashioned intellectual duel.

This gives rise to the book’s overarching idea, never precisely argued for but always lurking in the background, that all post-War political epochs in Europe are rendered undifferentiated by a crippling fear of returning to fascism. The death certificate of politics is signed by a toxic combination of the rejection of radicalism of any sort, including intellectual, and the onslaught of simulation. He announces that ‘the golden age of difference is past’ (122), opening up a world of indifference in which political differentiation disappears; parties and politicians no longer possess rival qualities, for that is the first step to fascism, but only bathe in the cool light of merely ‘publicised difference’ (123). This theme returns like a ghost throughout.

The book is divided into three parts, the first of which, ‘The Ordeal of the Union of the Left’, sets out Baudrillard’s account of the death of politics. This is typified by the Communist Party, which became obsessed with the idea of taking power even though it did not want it. For Baudrillard, the Communist Party’s desire for power is an attempt to compensate for the failed revolutionary promise. But this is only indicative of the fact that ‘everything is theatre in the present political situation, regimented by a simulacrum’ (21) of power which haunts society after the death of politics. He contends that while the communists’ struggle (which came to a crushing end in the election of 1978) finally reveals communism to be a caricature of power, since it is concerned only with bureaucratic domination, its fight with the dying political field is characteristic of all the parties.

At this stage, Baudrillard gives no indication of what caused the death of politics, but as is his standard rhetorical practice, examples abound of the effect whose cause remains mysterious. Politics, he says, has been replaced by ‘disciplined management’ of society, whereby the Left and the Right only appear to be in strife but actually ‘work together to preserve the model of political simulation’ (32). Thus the real has vanished, leaving ‘the weightless succession of all hypotheses, not a single one of which annuls another’ (32), which is the hyperrealist performance of politics.

Much of this was written before, or just after, the publication of Simulacra and Simulation in 1981, so it represents an ill-formed version of Baudrillard’s central idea. This best explains why the key notion of ‘the real’ and how precisely the Communist Party typifies simulation go largely unexplained, leaving us only with soundbites: ‘The Communist Party itself – like the real, like the social – is still what it is, but is probably no longer any more than that, which is to say that it is exhausting itself into its own resemblance’ (42). After a lengthy analysis of the frailties of the Communist Party, which entirely disappears from the narrative as the Socialists come into government, Baudrillard spells out what has replaced politics, and thus gives an inkling as to its death. Real political power, he says, has been overcome by spectacle and the masses prefer spectacle to the cold, inhuman ‘rational management of the social’ (51) that politics had become.

The second part, ‘The State of Grace’, fleshes out the simulation of politics after the Socialist Party won the 1981 election. The critical point for Baudrillard is that, in reverting to simulation, socialism denied the people all power of genuine participation. He engages in a lengthy discussion of how socialism is the end of the social sphere, where ‘we are summoned to participate genuinely, as if it were real … in an unreal … event’ (78). Baudrillard uses this to mobilise his idea that that events had ceased to occur, arguing that France now has to reconcile itself to the end of its history. He does not detail the end of history in any formal way, but it seems to amount to the claim that Socialism waited so long to come to power that in the interim it died inside and became an inert administration.

The whole of the second part is therefore dedicated to a largely emotional, rather than overtly political or philosophical, lamentation of the fact that socialism took power in an age when spectacle rendered politics impossible. He compares, for example, the socialist regime to the televised image, washed out of difference and yet drawing the people in so as to erase any critical gaze; ‘they seek to implicate you emotionally, to weave an ambiance: you participate in Socialism as in a video game or a TV drama’ (85). The problem with socialism, he concludes, is that it is obsessed with moralising rather than with governing.

It is only in the third part, ‘September 1984: Euphoria on I.V.’, that we get to the root of both what caused the death of politics and the silence of the intellectuals. The death of politics occurs due to its professionalization as spectacle: politics has to be simulated because politicians are becoming more specialised in performance than they are in politics. They are ‘trying desperately: more often than not, their speeches boil down to a strategy of special effects, calculated atmosphere and performance’ (105), since, he says, if we live in a society of simulation our leaders should also be great simulators. In this atmosphere, he warns, ‘there is a great danger of confusing political status with cinematic charisma’, as the Americans did with Ronald Reagan. This situation is disastrous for the socialists because they are not professionals of either politics or the economy; rather, they are ‘confessionals who have nothing to offer on stage but the sentimental pathos of good faith and defeat’ (106). It is here that the silence of the intellectuals is finally explained in terms of the fact that scholars too are forced to become the stars of discourse through performance. At the death of politics, intellectuals can no longer represent dissidence as the ‘herald of negativity’ (122), and so all of culture is flattened into a mass of simulation and performance.

Baudrillard concludes with characteristic delight by comparing the death of politics to a mortgage whose repayment has been deferred until the dawning of the 21st Century. He says the Socialists are condemned to stay in power, so that their ‘pious vision of the social’ can be forgiven later, since ‘all initiative is suspended, the dice are cast, the bets are in, society is frozen in advance … We are accelerating into the new millennium without realising it … The years ahead are already sacrificed’ (145-7).

Baudrillard is not a historian, so anyone hoping for a conventional account of how the Socialist Party came to power in 1980s France is going to be disappointed. His account of events, which after all chronicles a major turnaround in French politics, is more an occasion to develop the philosophy for which he would later become famous than it is for documenting history. It is often said that Baudrillard is apolitical and this book, in my view, does little to dispel that. He cares about society and is in that sense political, but he is less interested in adding to the discourse on politics by resolving any ideological problems than he is in furthering the theory of simulation as the catch-all characterisation of postmodernity.

The ideas of politics as spectacle and politicians as professionals have a grim parallel with today. Baudrillard warns of the dangers of a moral perspective that contrasts good and evil, which is socialism’s key weakness, as if to prefigure the events that unfolded in Iraq and Afghanistan. In the age of simulation, all we have is information and communication in place of real politics, but in the hands of a hyper-professional, they can be used to mount unspeakable atrocities. Baudrillard foresaw with painful clarity that spectacle anaesthetises the masses so that the ‘smiling professional mutants and self-regenerating optimists’ like Bush and Blair can perform the act of government seamlessly while simultaneously obliterating inconvenient difference. Indeed, we might see the coalition of the Republicans and Labour as a gruesome illustration of Baudrillard’s world of political indifference that preserves the spectre of the simulacrum.