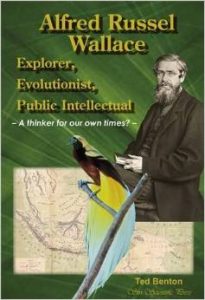 Recognition of Wallace has been slow in coming and even today, with three biographies since 2001, a flurry of studies and his undisputed right to be acknowledged as one of the two founding fathers of biological evolution, Darwin’s name remains highlighted in splendid isolation. Darwin and Wallace should trip off the tongue as readily as Marks & Spencer or Bonnie and Clyde and part of the reason why this is not the case may be related to some suspect footwork on the part of Darwin and his friends. Wallace wrote to Darwin in February 1858, setting out ideas that alarmed the man who had not yet made public his own thoughts on evolution. What followed was a joint presentation of their ideas, placing extracts from Darwin’s work first, with the possibility that Darwin may have dipped into some of Wallace’s ideas. This is contentious ground and Ted Benton’s judicious handling of it – carefully drawing out the differences and similarities between their views on evolution in their joint ‘On the tendency of varieties to depart indefinitely from the original type’ paper of 1858 – is exemplary and typical of the author’s approach to his subject matter. Benton marshals evidence, aware of all the scholarship, and presents facts and reasoned judgements while avoiding polemical statements.

The book’s first two main chapters outline the course of Wallace’s life and they create a lively impression of the huge distances he travelled, first within South America and then across South-East Asia. Equally surprising is the extent of his killing, skinning and impaling of birds and insects – perhaps not on an industrial scale but let’s say a prodigious one – partly to finance his travels by selling them to private collectors and institutions. When he returned from the Malay Archipelago in 1862, having travelled 14,000 miles within the region, he had amassed over 25,000 specimens of insects, molluscs, reptiles, birds and mammals (of which 5,000 were new to science).

There are three chapters devoted to evolution and natural selection, starting with the development of Wallace’s ideas that led to the fateful letter posted to Darwin in 1858 but also covering his four-year work on the geographical distribution of animals, a study that founded the science of biogeography. Wallace’s sturdy defence of what he was happy to call Darwinism at a time when Darwin himself was making concessions to those advocating alternative mechanisms of biological change remains consistent and Benton warms to Wallace’s utter lack of rancour in his dealings with Darwin. The second of these three chapters traces the issue of sexual selection, the role of female choice in determining evolutionary outcomes, and the profound implication of attributing to non-humans the exercise of choice based on standards of an aesthetic kind. While Wallace resisted Darwin’s recognition of sexual selection and was reluctant to accept the idea that birds and insects could possess some notion of the beautiful, he was more willing than Darwin had been to explore the revolutionary implications of human descent from a primate ancestor. In speculating, however, over how language and a moral sense could have evolved, Wallace was prepared to depart from natural selection and postulate agencies of a supernatural kind as responsible for the emergence of a single species radically different to its primate ancestors. In the last of these three chapters, Benton charts with precision Wallace’s shift from a completely naturalistic explanation of evolution – at a time when he was attracted to spiritualism – while giving full due to the more important similarities with Darwin’s thought. It seems a little puzzling that Wallace, so politically progressive, did not develop Darwin’s awareness of how social forms could also shape behaviour. Wallace’s socialist values could have linked with and amplified his evolutionary theory and Benton recognises this, rightly stressing how variations in organic forms could casually affect changes in human capacities.

Before the book concludes with reflections on Wallace’s legacy there are two chapters tracing Wallace’s social and political thought, beginning with the influence of Robert Owen. This is fascinating material, making clear how his early encounters with Amazon Indians took Wallace well outside the comfort zone of most Victorians and convinced him of the essential equality of all people. Back in England, he campaigned for land nationalization and by 1890 was confident about his socialist beliefs and wrote numerous articles on political issues of the day. Benton carefully traces the development – the word evolution comes to mind – of Wallace’s political thinking, locating the origins of his concern with land ownership to Parnell’s campaign in Ireland and at Westminster. He was invited to become president of a new Land Nationalisation Society and began reading Henry George, the American radical, and H. V. Mills. The latter’s Poverty and the State helped Wallace to join up the dots between issues over land ownership and the position of wage workers more generally. Another American writer, Edward Bellamy, contributed to Wallace’s growing conviction that socialism was the only solution to poverty and inequality, a realization that also spurred the foundation of the Social Democratic Federation in 1881 and the Fabian Society three years later. Sections of Wallace’s Wonderful Century (1898), on militarism and imperialism, are testimony to the political road he had travelled and his vision of social evolution that sits alongside its natural counterpart. Biological evolution, he comes to see, has led to a human species capable of moral and intellectual progress, something he perceived in his first encounter with the people he encountered in the Amazon and which he recalled in his autobiography My Life:

the unexpected sensation of surprise and delight was my first meeting and living with man in a state of nature—with absolute uncontaminated savages! … they walked with the free step of the independent forest-dweller, and, except the few that were known to my companion, paid no attention whatsoever to us, mere strangers of an alien race. In every detail they were original and self-sustaining as are the wild animals of the forests.

Wallace came to realize that what he admired about the inhabitants of the Amazon was denied to many citizens of his country.

Benton’s book is a thoroughly well-researched account of an unusual Victorian and his style of writing is admirably straightforward, despite a penchant for exclamation marks, and it is only the absence of an index that is regrettable.