Marx & Philosophy Review of BooksReviews‘Periodizing Jameson: Dialectics, the University, and the Desire for Narrative’ reviewed by Thomas J Millay 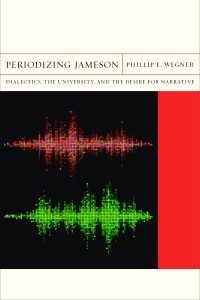 Phillip E Wegner
Periodizing Jameson: Dialectics, the University, and the Desire for Narrative

Having written on utopia, popular culture in the U.S. from 1989-2001, SF, the nation-state, and modernity, Phillip E. Wegner’s recent book, ostensibly focused on Fredric Jameson, is similarly diverse. Though a major consideration of Jameson does occur, the inclusion of Wegner’s own theories on the aforementioned variety of subjects makes the work difficult to assess. There is a unique, illuminating reading of four of Jameson’s texts: Marxism and Form, The Political Unconscious, Postmodernism, and Archaeologies of the Future. This reading fits Wegner’s title quite clearly: each of these major texts belongs to a specific period, and—in Wegner’s most original insight—that period is reflected in the very form of the text itself. Yet in addition to this periodizing reading of Jameson, there are a whole host of other topics thrown in: Lacan avec Greimas, Badiou’s politics of love, It’s a Wonderful Life, and the state of the university under late capitalism, to mention only a few. While the reading of Jameson is compelling, opening up texts read many times previously in a strikingly new way, the grab-bag of other topics tends to distract from this central concern.

This heterogeneity of material is mentioned in Wegner’s Preface, but how everything hangs together is not sufficiently theorized. One can grant that there is surely a kind of narrative unity to the successive periods of Jameson’s works as Wegner presents them (xvii), but this narrative is simply not able to draw the text as a whole together. Such a lack of coherence remains a major weakness of Wegner’s book, but it does not prevent the reader from reorganizing the material on her own terms and grasping the key insights which are undeniably present. In order to accomplish this reorganization, it is best to isolate Wegner’s reading of the four major texts, before turning to a brief sampling of his other topics.

As mentioned, Wegner’s attention to the form of Jameson’s texts is the most unique and enduring contribution on display here. Wegner is certainly correct in saying, “While much of the discussion of Jameson’s writings has centered on their content, far less attention has been paid to their form, or their highly original Darstellung” (xxiii). The form of each of the four major texts mentioned above is connected to the period in which they were written (xxiv, 18): Marxism and Form is realist, The Political Unconscious is modernist, Postmodernism is postmodernist, and Archaeologies of the Future is a fully conscious globalized postmodernism. This organization in itself is a remarkable dialectical reversal, as Jameson’s own schema snaps back to re-classify his own works (xxiii, 19); Jameson’s method of reading texts is applied to re-reading Jameson himself (213), the Owl of Minerva serving thereby to vindicate the dialectic to which Jameson has all along been committed. Periodizing Jameson is therefore “an experiment in intellectual biography” (23), where the theorist’s own categories are reflexively used to map his career.

The periodization proceeds as follows. First, there is a comment on the form of the work: “[T]he chapters of Marxism and Form,” Wegner writes, “are ordered like those in a realist novel, each figure appearing on stage when, and only when, necessitated by the development of the work’s plot” (32). Second, there is a linking of this form to the historical period of the work in question: “If, as Jameson suggests, ‘realism is dependent on the possibility of access to the forces of change in a given moment of history,’ then it is the social and cultural, political and intellectual ferment of the 1960s that makes his own ‘realist’ narrative possible” (39). This two-step coordination between form and historical period continues on through the remaining three works, though sometimes in reverse order: after the collapse of the collective practice believed possible in the 1960s, The Political Unconscious must reinvent the language of theory all on its own (42), leading to its modernist form (51); the heterogeneity of Postmodernism reflects the explosion of uncoordinatable objects in late capitalism, the lack of discernible narrative being a direct expression of our condition (61); finally, the organization of Archaeologies of the Future around Utopia reflects the situation of “‘late postmodernism,’” the “‘cultural logic of globalization’” (186), where everything is saturated by the system and Utopia is the only remaining category for imagining something different (201-3).

That Wegner is able to draw all these texts into his periodizing narrative is astounding, by turns inventive and persuasive. Jameson’s oeuvre is given fresh historical vividness in a way that Jameson himself has done for the works of so many others, a kind of karmic appropriateness being thereby restored to the universe. It also becomes clear that Jameson has always been an American theorist (Cornel West’s reservations aside), for the situations Jameson is responding to are undoubtedly American ones (xix). On top of that, the less major works by Jameson also gain an enhanced clarity: The Geopolitical Aesthetic, for example, is revealed to be an attempted compensation for the fragmentation of postmodernity (unlike Postmodernism, which is more nearly an expression of it), which unites the fragments of our world in the very practice of cognitive mapping made possible by film (76-9). In short, the fruitfulness of Wegner’s periodization parallels the fecundity of Jameson’s own work.

As previously mentioned, there is a great deal of material in Periodizing Jameson that does not contribute to the narrative just outlined, material that perhaps would have been better placed in a separate collection of essays on Jameson. Despite this caveat, there is much to be gained from Wegner’s reflections. Especially to be admired is his sketch of Jameson as the rare critic who practices not only ideology critique (à la Theodor Adorno), but also a positive—even redemptive—hermeneutic, a reading and recovery of the potentialities within our world (à la Ernst Bloch). Wegner writes: “If we accept Jameson’s claims that critical Marxist criticism approaches texts as allegories, then what I am calling for here would be a hermeneutic attention to the figurative dimensions of these same cultural texts. Such a labor involves tremendous risk, as we move from the firm ground of what-is-though-shouldn’t-be to what-should-be-but-isn’t, and as we shift from a critical to a much more affirmative stance” (139). The two types of critics usually separated are dialectically combined in Jameson’s own writing, where—in the context of dire meditations on the newly global and even absolute character of contemporary capitalism—the figures of utopia are yet ceaselessly traced out, even in the most unexpected places (e.g., Walmart or The Wire). It seems like, with Jameson, there is the possibility of a ‘cracking open’ nearly everywhere (194); thus what we see in this kind of critical labor is the desperately needed reinvigoration of hope (139).

On the negative side, Wegner finds Jameson most helpful in diagnosing the malaise of the contemporary university. “Valences of the Dialectic,” he writes, “also provides us with tools to think together the seemingly antithetical developments of the neoliberal assault on the humanities and a neoconservative defense of the disciplines” (174). This unity of opposites is grounded in the well-nigh instinctive wish to avoid any sort of politicization of education (175), thereby keeping education tied to its obvious purpose: the production of employable market citizens. The reintroduction of politics into humanities education that theory attempts to perform is firmly resisted by the pincer movement Jameson helps us see, and only in such a way is the true obstacle to the presence of theory in the university fully revealed.

There are many other such insightful asides in Periodizing Jameson. Yet in the book’s Afterword, the periodizing narrative in which Jameson’s texts are placed is affirmed to be the chief purpose of Wegner’s experiment in intellectual biography (212). With this I must concur. No matter how interesting the asides may be, the most valuable gift Wegner gives us is a new way of seeing the works of Fredric Jameson. In this light, it is with gratitude that one closes the pages of this book.