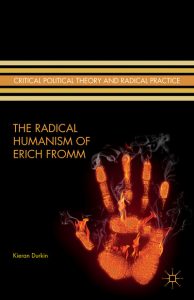 Michael Arfken is an Associate Professor of Psychology at the University of Prince Edward Island, …

Although scholarship surrounding the Frankfurt School has become something of an intellectual industry, the bulk of this work has tended to emphasize Adorno, Horkheimer, and Marcuse’s contributions to twentieth century social theory. To the extent that Erich Fromm has attracted interest, he has often been treated as little more than a footnote to these more influential scholars. Yet it seems important to ask whether contemporary social theory is well suited to address the most pressing social, political, and economic concerns of the day. If we discover that social theory has actually come to resemble the structure of modern society with rival intellectual factions competing for material resources then it would appear that the time is ripe to reflect on the circumstances that thrust certain intellectuals into the spotlight while relegating others to the margins of critical thought. Placing Fromm’s work against the background of contemporary social theoretical debates, The Radical Humanism of Erich Fromm explores whether a fresh approach can resolve some of the seemingly intractable issues that have come to dominate the intellectual landscape.

The book begins with an impressive biographical sketch of Fromm’s life focussing on the social and political context of his work and the personal and professional relationships that shaped his thought. Drawing on his extensive work at the Fromm Archives in Tübingen, Durkin paints a portrait of Fromm as a politically engaged intellectual committed to interrogating the social and economic structure of modern society. Throughout the work, the author draws on this biographical sketch to explore Fromm’s engagement with a range of traditions and approaches from psychoanalysis and Marxism to environmentalism and cultural studies. Durkin’s analysis of the role that Judaism and evolutionary theory play in Fromm’s thought will no doubt stand as a lasting contribution to the emerging scholarship surrounding this forgotten intellectual.

At the heart of Fromm’s work, Durkin discerns a radical humanism in stark contrast to the anti-humanism infecting much of contemporary social thought. Because decades of poststructural theory appear to have had little impact on the concrete lives of those living under the crushing weight of various forms of domination and exploitation, he suggests that Fromm’s attempt to resurrect a politically robust humanism is more important now than ever before. This return to humanism is neither an uncritical appropriation of the individual rational actor of classical political economy nor a romantic revival of an asocial human essence but instead represents a détente between the need to establish a solid foundation for political action and a recognition of the social, economic, and political forces that patrol the boundaries of any foundational project. In this sense, Fromm’s thought is best understood as a ‘qualified essentialism’ that exists somewhere between the extreme relativism of postmodernism and the absolute essentialism to which it was a reaction.

According to Durkin, a central feature of Fromm’s radical humanism is a rehabilitation of the much abused notion of human nature. Within contemporary social theory it has become almost a rite of passage to treat the idea that individuals’ possess essential features linking them to a common humanity as an antiquated universalism that subordinates a rich and diverse collection of social practices to a singular, homogenous world view. While Durkin does not deny that human nature has in some cases been used as a tool of domination, he argues that Fromm’s work is in a unique position to tease out the revolutionary dimensions of human nature from those deployed in the service of the status quo. Clearly, much is at stake in this endeavour since Durkin views the identification of something that connects individuals to a common humanity as a vital component of any radical political project worthy of the name.

To some extent, Durkin’s effort to draw a strong and compelling contrast between the unique contributions of a marginalized scholar and the existing social theoretical canon overemphasizes the uniform nature of the contemporary intellectual landscape. His suggestion that modern social theory is fundamentally anti-humanist certainly highlights an important dimension of much of contemporary thought but it also paints in broad strokes a range of perspectives that are arguably humanist – perhaps even radically so – and that nonetheless have little interest in erecting foundations or any commitment to a correspondence theory of truth. The most notable example is of course the work of Richard Rorty.

Given Rorty’s vehement rejection of Marx’s philosophy of history and his disdain for modern political movements inspired by Marxism, it is difficult to see his work as contributing to anything we might call a radical humanism. If we add to this the fact that Durkin views Rorty’s neopragmatism as the very apotheosis of the anti-humanist tradition then it would seem that we have little reason to enlist Rorty in any radical critique of the class structure of society. Unfortunately, this overlooks features of Rorty’s work that are both humanist and highly critical of capitalism. The source of this oversight appears to be Durkin’s exceedingly restrictive notion of human nature. In an effort to rehabilitate human nature, Durkin comes to equate anti-foundationalism with anti-humanism. This not only casts much of contemporary social theory to the curb, it also misses an opportunity to bring Fromm’s thought into a meaningful dialogue with traditions that advance a different understanding of human nature from Aristotelian philosophy and virtue ethics to communitarianism and pragmatism. In Rorty’s case, humanism need not entail a commitment to a universal human nature but instead can develop through a recognition that each of us exist somewhere between the social practices of an established way of life and a radically new form of existence that we can at best only dimly perceive. In this sense, our nature is perhaps best understood as something we move towards rather than something we stand upon. Rorty’s mistake is not his effort to demonstrate that our epistemology and ontology inevitably emerge against the background of the contingent practices of our tradition but his defense of a tradition that is clearly ill equipped to address the depths of modern exploitation.

In the context of reevaluating Fromm’s work, it is also important to reflect on the relationship between psychoanalysis and social theory more generally. For much of the twentieth century, psychoanalysis supplied social theorists with a useful language for exploring the dialectical relationship between human psychology and many of the dominant features of modern society. As Durkin notes, one of Fromm’s major contributions to psychoanalytic theory – and a major factor in Fromm’s split with his colleagues at the Frankfurt School – is his attempt to develop a psychoanalysis grounded in intersubjectivity. While Fromm’s challenge to libido theory appears to have stood the test of time, it seems reasonable to ask whether classical or contemporary psychoanalysis remains our best hope for exploring the political and economic intersection of agency and social structure. Without questioning the utility of psychoanalysis in clinical practice, it remains to be seen whether a perspective that has long been marginalized from mainstream psychology is well suited to bringing something like class struggle to the table. Taking a tip from Marx himself, we can begin with the recognition that the social relations and technology developed under capitalism are an integral part of the process of overcoming capitalism. In the case of psychology, we might begin by focusing on various approaches such as embodied cognition and social neuroscience that are operating at the center rather than the periphery of the discipline. Given the vast resources that are being invested in these areas, a superior strategy with respect to class struggle may be to harness these approaches to something like a corporeal revolution in political and economic theory. While there is certainly no reason to exclude psychoanalysis from this project, it may be strategic mistake to make it the point of departure for such a revolution.

One of the lessons to be learned from contemporary social theory is that our economic and political structures not only draw on but also contribute to the reproduction of a particular conception of the individual – a philosophical anthropology. For some scholars, this fact alone more or less signs the death warrant for meaningful political action. Yet others view something like human nature as the last refuge for challenging institutions that continue to exploit the greater part of the plant for their own material advantage. The Radical Humanism of Erich Fromm argues that for those who see little alternative to surrendering to these institutions, the burden of proof remains dangerously low. In this sense, a reevaluation of Fromm’s work certainly presents a unique and important opportunity for those struggling to establish a viable economic and political alternative to our present condition.