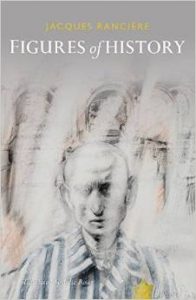 Although history has always featured in the work of Jacques Rancière, the exact details of its role in his thought prior to Figures of History had never been made completely clear. Certainly history needed to figure somewhere given the commitment demanded by his politics, but its noticeable absence from the Marxist metapolitics against and through which his own politics is developed always left history’s status in his work as something of a puzzle. Frustratingly, the onetime contributor to Althusser’s Reading Capital seemed content to leave history as an unknown signifier in his thought, a tacit force to be drawn on when convenient and ignored when not. It is with this in mind that the true heft of Figures of History can be gauged. A vivid and compelling engagement with art, history, and the challenges of revisionism, the text holds a noteable promise for those who have never been wholly convinced by Rancière’s break with the Marxist tradition, or by how it is that he lays out the distance between his own democratic politics and the politics of the German romantics he sets it against.

Rancière’s claim in the text is that history is itself the new fabric of the sensible, “the very stuff of human action.” (13) And while he somewhat surprisingly acknowledges that history remains that power that in stealing bodies dissolves all individuality into examples, he nevertheless maintains that it is at the same time and in the same way the very fabric in which sense, perception, and distribution all have their place. (67-9) The text, true to his style, is essayistic and approaches history in two parataxical parts, the plot of history as it is before the camera lens, and then as it stands having emerged from the forms and rules of both history and genre painting. Much as with his other recent works, Figures of History is carefully sprinkled with winks and nods to his earlier writings each offering to the reader the stakes of the work in terms of his larger project, albeit in an at times frustratingly veiled fashion. Indeed underpinning much of the text is Rancière’s paradoxical assumption, first articulated in The Ignorant Schoolmaster and revisited often since then, of the capacity of the incapable, as well as the reconfiguring and doubled sense of politics that this assumption entails. Because for Rancière politics, as a reconfiguration of the sensible order, is at once the object and the means of his criticism, the sense of history in Figures of History is revealed as much from the perspective of the art objects that Rancière engages with, as it is from his critique of them.

In the first plot Rancière casts history as the time where “those who have no right to occupy the same place can occupy the same image,” (13) where the equality of all is taken in by the camera lens, itself unaware of either the great or the small, which then sets them together in a common image. Rancière’s aim in the present work does not seem to be, in the manner of Dziga Vertov, to give to either art, film or the movie camera any kind of democratic or technological mission, instead he aims to show how it is that the history of the illustrious, the history of history makers, not only can, but even necessarily, lives in the image along with that opposing sense of history as chronicle, of history as the silent record of everyday life. Per Rancière, there is no clear division, as some might have it, between monument, which talks without words, and document, that is laden with intention. (21-3) History in this first plot comes to have the sense of a common ontological tenor, of a time that provides the stage in the conflictual staging of worlds.

This sense of history being something like a spatial-temporal stage is taken up again in the second plot, only this time it is bought out in a more polemic fashion, through both its difference from, and its place within, the senses of history to be found in history and genre painting. Here he suggests that there are at least four senses to the term: history as anthology, as story or fable, as historical power and finally as fabric of the sensible. (61-70) The first two he calls great figure histories, in the sense that they teach lessons “unchanging over time, and intended only for those whose vocation it was to leave behind a memory of their actions,” who are then to “accordingly draw an example from the memorable deeds of other men worthy of being remembered.”(11-2) While the final two, by contrast, are histories that are never equal to either their figures or their scenes. (67) Where the former are representative, the later are the reverse, to be found in the insubstantial characters “who seem to arise from the lines and brush strokes and the pictorial material, ready to be swept up again by the power that pulled them out of the chaos of coloured material.” (68)

The distinction drawn between these last two histories mirrors Rancière’s earlier distinction in Disagreement between Marxist metapolitics and his own sense of politics, and with it this text takes its most surprising turn. Rancière asserts that “History with a capital H is not just the power of sense to exceed action which is turned upside-down as a demonstration of non-sense.… Historical time is not just the time of great collective destinies. It is the time where anyone and anything at all makes history and bears witness to history.”(68-9) Given Rancière’s almost satirical view of metapolitics and its apparently ineluctable notions of historical process, the concession that history in its doubled sense retains a fate-dealing power is of itself quite significant. That this power is set by Rancière in the very fabric of the common sensible, something which had previously been cast as unknowable free appearance, is a remarkable turn. Mediation in the literature on Rancière has never had a favourable place. With the exception perhaps of those few who would see his politics as being mediated by a third pure realm of politics, the idea of something outside the polemic of police and politics animating his politics has not held much weight. And while Figures of History does not go so far as to claim that immanent critique needs to be mediated through either a sense of social totality or history, it is clear that the double life of objects involves a certain phantasmagoria, a mediated and fate-dealing historicity on the part of the object. (80)

Setting this doubled sense of history to the question then of what art is to do in the face of revisionism Rancière suggests that:

we have to revise Adorno’s famous phrase according to which art is impossible after Auschwitz. The reverse is true: after Auschwitz, art is the only thing possible because art always entails the presence of an absence; because it is the very job of art to reveal something that is invisible, through the controlled power of words and images, connected or unconnected; because art alone makes the inhuman perceptible, felt. (49-50)

Here, in a way not altogether unlike Adorno, the inhumanity of extermination comes to be matched only by the inhumanity of beauty, and the role of art through the play of its forms come to be its own simultaneous elimination and completion. (81) Of course this view of art’s possibility, in as much as it involves a cancellation of the opposite demands of form and life, is not apart from that which Rancière sets out in his earlier work. What is distinct here is that this play is explicitly given impetus and tied to a commitment demanded by the particular history of the society in which it has its place, something which would seem to countermand somewhat his earlier view on aesthetic arts necessary melancholic resignation. If there is a historical power that survives aesthetic experience and gives meaning and direction to its objects, is it still possible for Rancière to claim as he has before that this experience is one momentarily liquidated of hierarchy? The sense that one gets reading Figures of History is that rather than being a suspension, aesthetic experience lives in the antimonies of its oppositions, something that appears much more like Adorno’s sense of beauty as the spell over the spell than it does its reverse.

For all this Figures of History remains a compelling and enigmatic text. A quick and refreshing read, it provides a turn in Rancière work that does well to question the easiness with which his thought, as someone of the generation of ’68, has been set beyond Marxism and the critical tradition. Here, Rancière maintains his break with Althusserianism and the critique of ideology, but there is enough in the text, be it as commitment or as mediated history, to question the particularity of his break with a committed politics of the Left.