Marx & Philosophy Review of BooksReviews‘Controversies: A Dialogue on the Politics and Philosophy of Our Times’ reviewed by Jeff Noonan 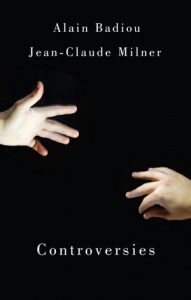 Alain Badiou and Jean-Claude Milner
Controversies: A Dialogue on the Politics and Philosophy of Our Times

Jeff Noonan is Professor of Philosophy at the University of Windsor, Windsor, Ontario, Canada. His …

If it is true, as Alain Badiou says in Controversies, that he is a “Platonist through and through,” (132) then it is fitting that the book takes a dialogical form. While English speaking readers unfamiliar with the work of Badiou’s former comrade Jean-Claude Milner will find some of the details of their differences difficult to interpret, the more general political and philosophical differences they discuss shed light on central problems of our age. While a certain polite restraint prevails throughout most of three exchanges that form the body of the book (it concludes with brief written statements by each thinker in which they clarify and sharpen their differences) there are moments where one can feel the genuine heat that only face to face argument can generate. Controversies is thus an important addition to contemporary political philosophy.

Badiou and Milner, both former Maoists in the 1960s have grown far apart politically in the ensuing decades. Of the varied problems they explore, four stand out: 1) the meaning of “politics” and its foundational values; 2) the failure of the twentieth century left and the future of the communist project, 3) the status of universal Ideas and truths, and 4) the state of contemporary political debate in France. I will treat each topic in turn.

For Jean-Claude Milner, politics is essentially concerned with “bodies and their survival.” (12) The main political lesson of the twentieth century is that a way must be found to transform violent conflict—which has only resulted in massacres but no real solutions to the underlying structural causes of oppression and exploitation—into political argument. Politics for Milner is a procedure in which the attempt to convince through argument replaces the attempt to destroy the opponent through violence. Badiou, while agreeing that “it is better not to kill, if possible,” (104) maintains forcefully that to simply condemn massacres is abstract moralism that ensures only that the killing will continue: “I would say,” he argues, “that … the massacres, are only intelligible … —and that we can therefore only work to prevent them—if we understand the politics that mad them possible.”(25) The difference here speaks not only to a difference of interpretation of causes (moral blindness to suffering bodies in Milner’s case, incompatible political projects in Badiou’s) but also a fundamental difference over the meaning of politics. For Milner politics is essentially conservative: it should do no harm. For Badiou, politics is activist: trying to do no harm lets existing harms continue unchallenged. The twenty first century needs a new politics in which the goal is not survival but a new articulation of the Ideas of freedom and equality. Survival is the goal of the “the human animal;” (95) truth the aim of the human being.

While Badiou’s critique of Milner is sound in so far as it is the case that life-preservation demands understanding of the causes of life-destruction, there seems room for a synthesis that neither pursues. One can agree with Badiou that politics concerns struggles for truth that go beyond the established universe of discourse and the protection of the abstract animality of humanity, but also argue that the human animal must be alive if it is to become anything higher. Especially in light of globally life-threatening environmental collapse (a problem neither addresses) it becomes apparent that the affirmation of life and the protection of life’s conditions must be the foundation (if not the ultimate goal) of transformative politics today.

That conclusion is also relevant for assessing the second major topic of disagreement. Milner and Badiou agree that the Leninist model of revolution is dead, but disagree on the question of whether a new model of revolution is necessary. Milner, like many ex-Marxists, has been so shaken by the violence of twentieth century revolutions that he rejects the desirability of a new revolutionary project. (128) For Badiou, by contrast, a new revolutionary formation against the hegemony of parlemento-capitalism is necessary, although he admits that he does not know what definite form it will take. Whatever new politics emerges, it must learn the lessons of the past, must recognise the limitations of recent ‘horizontalist’ movements like Occupy Wall Street, and formulate hypotheses (like his own ‘Communist hypothesis’), which “retain the principle of possibility” (125) of political goals that cannot be captured by the current system. Whereas Milner acknowledges structural injustice, but has no hope in its ever being systematically overcome, Badiou retains that hope, but is politically honest enough to say that he cannot foresee what sort of movement would be capable of realizing the political truth his hypothesis preserves. Their concrete political focus is France and Eurocentric for the most part and it thus excludes consideration of the various experiments with “twenty-first century socialism” in Venezuela and other South American countries. These experiments are highly germane to the political problems on which they focus, and some engagement with them, especially in Badiou’s case, might have advanced the conversation.

However, that which really divides the two former comrades is not matters of political analysis but the conceptual framework each brings to bear on those problems. Their political differences are grounded in philosophical differences concerning universality and truth. For Badiou, the self-proclaimed Platonist, truths are universal, not only in their not being relative to changing contexts, but also in terms of their capacity to destabilise existing social structures, all of which make claims to legitimacy that genuine truths (those that mobilise subjects faithful to them) undermine. (80) Milner, by contrast, bases his conservative politics on a rejection of transcendent truths. As a consequence, he rejects the disruptive force of truth essential to Badiou. One might say that for Milner there are truths but no Truth, no getting out of Plato’s cave, as he says, (127) and thus no universal standpoint from which to criticise existing reality and to chart of fundamentally different course. While the respective arguments can only by fully understood if readers are versed in each author’s major theoretical works, the philosophical exchanges serve as a sound introduction.

There can be no misunderstanding their differences in regard to the main political problems of France today. Had I been reading this aspect of their exchange prior to the Charlie Hebdo attacks, I might have been tempted to judge it as provincial and not of general interest. However, the harsh light cast on the state of Muslims in France January’s attacks gives their very sharp disagreement over the relative importance in France today of anti-Semitism or anti-Arab, anti-Muslim sentiment and policy, global significance. For Milner, anti-Semitism remains a profound French and European problem, while for Badiou the Arab population of France has replaced the Jews as the demonized minority living in the most precarious and dangerous circumstances. It is difficult to disagree with his argument that “Jean-Claude Milner … almost monstrously underestimates, what he in fact simply denies, is the quasi-consensual power in France, no doubt in Europe as a whole, of the hostility towards Arabs and Black Africans.” (153) In the wake of January’s shootings and the massive police and military response, the paranoia about “sleeper cells” and a thousand and one Arab plots against “the West,” the importance of Badiou’s arguments cannot be underestimated. The conversations thus conclude—as is fitting for a Platonic dialogue—in an aporia which only future practice can resolve.