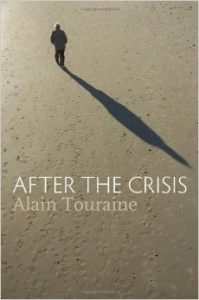 Alain Touraine
After the Crisis

Yannick Harrison is a PhD fellow at Roskilde University and Radboud University, doing research on …

Alain Touraine’s recent work channels the spirit of Stéphane Hessel in its powerful call for action against a ‘financial capitalism’ that has torn ‘the social fabric’ apart (157). Touraine, who has previously argued that Western economies have moved from being industrial societies to post-industrial societies, now suggests that we are witnessing the birth of a new type of society because of the existence of a ‘post-social situation’ (3). In this new emerging configuration, ‘actors’ have separated themselves from the system (114). Under these new circumstances, the only hope for solving the crisis is to make an appeal to a social subject which is defined by its ‘right to have rights’ against the imperatives of ‘economic globalization’ (97). Though Touraine provides some suggestions in terms of future political strategy, the overall structure and presentation of his argument is at times so thoroughly incoherent that it ends up confusing the reader it seeks to enlighten. Unfortunately, the general analysis presented does not demonstrate the same rigour that marks Touraine’s otherwise influential works on social movements and post-industrial society.

By showing how the 2007-8 crisis has ‘caused the destruction of all the institutions’ previously governing economic relations (9), Touraine seeks to focus on the changes that go beyond ‘the measurable economic facts’ in order to examine the general organization of society (11). For Touraine, contemporary society is characterised by increasing complexity and fragmentation of the world in a manner that has prevented its ability to ‘give birth to a historically significant actor’ (15). In industrial society the main source of conflict was the distribution over the ‘transformation of physical resources’ (15), with the worker as the main social actor. Post-industrial society still made use of manufacturing, but communication introduced ‘new relationships’ between ‘the frame of mind of the communicator’ and ‘the information conveyed’ (95). Throughout these configurations, social actors could make use of ‘social institutions’ to climb the social hierarchy, as well as ‘strengthen their capacity to undertake social actions’ (95). However, with the dominance of financial ‘economic globalization’ and its on-going crisis, Touraine argues that a deep gulf has emerged between ‘the economic world and that of social institutions’ (96). Simultaneously, the silence of labour organizations and civil society at large has meant that the ‘aroused reactions’ of the victims have not been transformed into ‘political protest’ (27). Once this separation is complete, actors can no longer be defined in terms of their economic relationship, and as such it marks the end of what he calls a ‘socio-economic conception of social science’ (ibid).

This separation of actors from the system leads him to conclude that there is no longer an ‘underlying working principle’ such as ‘the class struggle in the past’ (114). The elimination of any underlying principle has also meant that the economic system is no longer capable of ‘self-regulation’ (ibid). The state, not possessing ‘any clear guidelines upon which to act’, concurrently finds itself ‘powerless in the face of global capitalism’ (115). And as the state is conceptualised as a third-party broker between the dominated and dominator, it has found itself unable to provide workers with ‘public funds or public support’ due to ‘pressure’ that economic and financial leaders ‘are able to exert … at the highest level’ (114-5). In short, governments, though able to offset the worst of the crisis, are no longer are able to erect institutional arrangements capable of creating equilibrium between social conflict and investment capacity. This leads us towards a post-social situation.

In this post-social situation we can no longer describe how actors are ‘identified by their place within social relationships’, but must conceptualise them in terms of ‘their relationship with themselves and with their own personal legitimacy’ (111). On the one hand, financial actors no longer make reference to the real economy, and on the other hand, we witness the birth of what Touraine terms an Arendtian human being, who is defined by the ‘right to have rights’ (97). Hence the central conflict on the new terrain of the post-social situation exists between the dominant power of the economy and ‘actors’ who are motivated by ‘the desire to defend their rights… [and who] base their desire for freedom and justice on their awareness of the human subject carried within themselves’ (112).

At times Touraine remains unclear about what causes the emergence of these non-social actors. Occasionally it is suggested as a long-term process that has been accelerated by the crisis and in other parts of the text it is suggested that the ‘crisis blocks the future … because it threatens to prevent the development of non-social actors’ (117). As such, the crisis becomes an agent for-itself, endowed with the ability to ‘impose’ a ‘solution’ upon society; yet on the same page, he states that a crisis does not ‘determine any given future’ (90). Certain points in the text acknowledge this ambiguity by conceptualising it as a contradiction, however this is left largely unexplored. Nevertheless, for Touraine, the only way of overcoming the post-social situation and of entering a new society is through the creation of a ‘self-aware’ subject that is aware ‘of the adversary’ (financial capital) and of the ‘stakes involved’ both for itself and for its adversary (107). Subsequently, the political aim should be to construct the ‘social organization’ of society around a social ‘individual’ and ‘its rights’ (69). While this argument may seem persuasive, it is presented in an unstructured fashion that fails to make it appear convincing.

As stated above, the structure of this book needs to be commented upon. While it appears rational for Touraine to divide the book into two main parts, most of the arguments in the second part are centred around ‘the post-social situation’ (chapter 7), the ‘emergence of non-social actors’ (chapter 8) and regulatory prescriptions (chapter 9), and have already been presented in part one. This makes it a noticeably repetitive read. Additionally, the reader is submitted to a stream of unusually incoherent arguments. This point is best illustrated with a textual example.

In a section entitled ‘The revenge of states’, Touraine first tells us that economic globalization has ‘crushed’ any ‘hopes’ of ‘political globalization’ (130). He then quickly restates how society has become increasingly stratified and sees fit to mention how young people use SMSs as a ‘dominant language’ to denote a new reality (131). Yet the confusion over the sudden infusion of what seems like an irrelevant detail does not end here, as we are introduced to how the crisis ‘has robbed the European idea of much of its strength’ and how influential the ‘American way of life’ is (131). For the sake of clarity I am going to list other factors and ideas that are mentioned and left unexplained within the same section: ‘the international financial system based in London and New York’; how the European Commission sees ‘itself responsible for the successful integration of Europe within the global economy’ (132); ‘the war in Iraq’ (ibid); national struggles in Central and Eastern Europe against Moscow (133); and a final mention of civil war in El Salvador (ibid). At the end of the section Touraine concludes that there are no signs that nations are ‘being absorbed into the realm of supranational organizations’ (ibid). If the task of describing the section itself seems confusing, reading and making sense of this presentation is even harder. At the beginning we are expecting Touraine to either argue how states are trying to curb economic globalization or how ‘political globalization’ is limited (what Touraine’s intention is with this concept, we are never told), but we end up with a result that seems uncoupled from the equation that preceded it. This reviewer must confess to having thrown the book away several times before mustering the courage to continue. At times, however, the reader feels as if the author actually does have sufficient knowledge on the subject of crisis.

This becomes visible when evaluating some of Touraine’s predictions. One is the claim that ‘we no longer hear the praises of neoliberalism being sung and it has lost much of its glory’ (47). However if the EU’s recent Fiscal Compact is not able to disprove such an assertion in practice, Philip Mirowski’s book Never Let a Serious Crisis Go to Waste (2013, reviewed here) has demonstrated how the intellectual arguments of neoliberalism have in fact survived in the realms of economics and state policy. Moreover, when discussing state intervention into the economy, Touraine fails to illustrate the reasons why the balance sheets of states have successfully been shifted onto the populace, i.e. how losses were socialised and profits were privatised. Instead, the issue of debt is discussed mostly with reference to how speculators and rating agencies attacked sovereign debt, and not how the internal structure of the Eurozone constituted the precondition for crisis or how states have constitutionalised austerity as a crisis management strategy. In this narrative the state is constructed as a passive victim in a way that ends up depoliticising both the history of the capitalist state and how the state has acted during the crisis. This, coincidentally, sits comfortably with his idealised representation of the postwar period and the call for the ‘the reconstruction of a capitalist society based on production’ (31), a point that is further illustrated by Touraine’s attempt at making the state the actor that wants and desires to oblige ‘the masters of the economy’ to ‘respect the responses and interests of the population’ (156). This reification of both finance and the state, along with his overall treatment of the crisis, seems to be symptomatic of Touraine’s own disciplinary rigidity, which is laid out in the beginning of the book.

After the Crisis starts by stating that even if sociologists can study the ‘economic factors’ of an economic situation, the current economic crisis remains ‘first and foremost a matter for economists’ (1) and in fact begs the reader to ‘stop targeting economists with unjustified reproaches’ (2). While adherence to disciplinary boundaries within academia need not be an obstacle, trans- or inter-disciplinarity would in this case have allowed Touraine to conduct the critical inquiry he originally set out to do. Writing in a time of crisis can be a difficult venture and during the last eight years of turmoil there has been no shortage of attempts. In this some have fared better than others, but unfortunately Alain Touraine’s book cannot claim to have performed well.