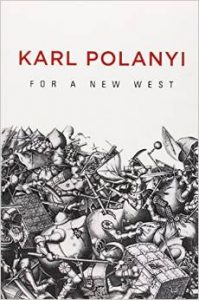 Marxist readers of this selection of Karl Polanyi’s for the most part previously unpublished essays and lectures gleaned from his archives, beware. Many of the essays are variations on a critique of economic determinism that targets Marxism. However, the Marxist reader can gain some comfort in finding that Polanyi’s critique also includes advocates, such as Friedrich Hayek, of market economics. Moreover, the general reader, be warned on assuming that these essays are only of historical interest. The general reader will find that many of the issues discussed in the book are still of current interest. But, the reader exclusively interested in the history of ideas stemming from the Austrian-Hungarian-German Europe of the pre- and post-WWII era, will find a focused representation of the debates concerning economics, pacifism, and the role of the social sciences for understanding, developing and implementing social policy, from the perspective of European liberal socialism.

I provide a brief historical context for Polanyi’s work, that is only alluded to in the Preface by Kari Polanyi Levitt, before going on to underscore some of the running argument carried on throughout these essays. Though the editors for the original Italian version and translation of Polanyi’s English and German language papers published now in English also allude to the historical context of Polanyi’s work, they concentrate on providing the main themes of Polanyi’s over-all work and a synopsis of each of the essays published in this essay selection.

The Introduction by Giorgio Resta mentions that “Karl Popper (known as “Karli” in Polanyi’s family, who would often receive him at their apartment on the Vorgartenstrasse in Vienna) makes exact references to Polanyi’s ideas in The Open Society and Its Enemies, but only mentions private conversations with him rather than any specific writings.” (14) This allusion refers to the ongoing debate in the philosophy of the social sciences about methodological individualism (Karl Popper) versus the theory of the institution (Karl Polanyi) as fundamental to understanding the unexpected and unwanted consequences of social policy. In this mix, we also have Friedrich Hayek who emphasized the fallibility of utopian planning and Michael Polanyi (the younger brother of Karl) who emphasized the perilous disregard for both tradition and tacit knowledge in radical social thinking. However, Karl Popper, Karl Polanyi, Michael Polanyi, and Friedrich Hayek shared in common a neo-Kantian humanist and anti-reductionist approach to the social sciences. This disputatious and fractious family of thinkers also shared in common the neo-Kantian heritage of the Enlightenment philosophy of the cosmopolitan vs the nationalist, and the libertarian (individual autonomy) vs the egalitarian (social collectivist) approach to social policy and its politics.

A higher flying bird’s-eye view of pre-WWII Austrian-Hungarian-German intellectuals, might also include the relationship of this argumentative neo-Kantian family with on one side those philosophers and social scientists who adopted logical and empirical positivism—a reductionist approach to the social sciences based on an empiricist approach to the natural sciences; and on the other side, those philosophers who adopted the approach of cultural criticism, a fusion of Hegelianism, Marxism, and Freudianism. But all these various families of thinkers, it should be noted were at the minimum, anti-Fascist and anti-Nazi. The anti-Fascist and anti-Nazi families of Austrian-Hungarian-German intellectuals can be clearly represented by Polanyi’s lecture series reprinted in this book in Chapter 17, “Conflicting Philosophies in Modern Society” (177-204). But what I want to focus on is the neo-Kantian humanism of Polanyi, rather than his more generally representative antipathy towards Fascism and Nazism, as a solution to the economic problems of unrestricted market economies. In this area of argument, Polanyi’s humanist approach raises the problem: who is the master—does economics control us or do we control economics?

Polanyi answers: “It is not for the economist, but for the moralist and the philosopher to decide what kind of society we should deem desirable. An industrial society has one thing in abundance, and that is material welfare more than is good for it. If, to uphold justice and the freedom restore meaning and unity in life, we should ever be called upon to sacrifice some efficiency in production, economy in consumption, or rationality of administration, an industrial civilization can afford it. The economic historians’ message to philosophers today should be: we can afford to be both just and free.” (38)

Apart from the moral and social dilemmas of market economies, what is wrong with both Marxism and market economists in their methodologies? Polanyi provides incisive critiques in the following: “Between the Marxist determinism of the powers of darkness and the laissez-faire determinism of the seraphic host, we find ourselves the victims of two kinds of inevitabilities: Marxist inevitability, which sometimes almost exultantly proclaims the inevitability of the loss of our freedoms, unless we resign ourselves to the status quo, changelessness and certain destruction; and laissez-faire inevitability, which proclaims precisely that fatal changelessness in a changing world, compliance with laissez-faire preconceptions, under the threat of an (allegedly) otherwise inevitable serfdom. In my conviction, these are merely two different forms of the same creed of economic determinism—a materialist legacy of the nineteenth century—which economic history does not bear out.” (40)

The positive side of Polanyi’s critique of economic determinism, both the Marxist and laissez-faire varieties, is that we have control over our economic destiny—a view still denied by those who talk about global economics and the sovereignty of the values and social dynamics of the current post-industrial information technology: “In truth, we will have just as much freedom in the future as we desire to create and to safeguard. Institutional guarantees of personal freedom are in principle compatible with any economic system.” (145) A further positive side of Polanyi’s critique of economic determinism is hope for what may now to many seem anachronistically naive: world peace based on the idea that humans can control our institutions according to principles of global justice. Polanyi, in an essay of 1935-6 (now Chapter 8, “The Roots of Pacifism”, 86-91), asks straightforwardly and answers straightforwardly: “What is the root of the danger of war in our age? It is this. The actual forms of material existence of man are those of world-wide interdependence. The political forms of human existence must also be worldwide. Either within the boundaries of a world empire or in those of a world federation—either through conquest and subjection or by international cooperation—the nations of the globe must be brought within the folds of one embracing body if our civilization is to survive. Until peace is organized in one of these two ways wars, and wars on an ever increasing scale, must continue.” (87)

The last quoted remark could sound either prophetic or archaic: prophetic in advocating a strong world federation of national governments as required to stop the current conflict among “civilizations”; or, archaic in realizing the utter failure of what we now have in the United Nations to stop both genocides and terrorist activities. Moreover, the form of liberal or cooperative socialism that Polanyi advocated in an essay of 1919 (translated from the German as Chapter 16, “The Crucial Issue Today, A Response”) underscores the tone the current reader might discern in the book as alternating between sounding prophetic or archaic. “There are two conceivable methods for distributing the product of social labor, namely by means of the market as the center of a web of prices that delivers good to needs, or without a market, through direct allocation. The former is reality; the latter, in the national and world economy, an impossibility. This is why cooperative socialism is synonymous with market economy: not the anarchic market of the capitalist profit economy as a field in which the plunder of the surplus value concealed in the prices is realized, but the organically structured market of equivalent products of free labor.” (170-1) [Moreover] “…Liberal socialism is fundamentally hostile to force. For liberal socialism, not only the state as an organism exercising domination over persons, but also the state as an administrator of things is, practically speaking, a necessary evil and, theoretically speaking, a superfluous and harmful construct. Any attempt to use state power to replace what can only arise through the life and activity of the individual inevitably has devastating consequences.” (172)

I will leave it to the reader to decide whether Polanyi’s essays in this selection in their advocacy for the social and political policies of cooperative socialism and a system of a world federal government are prophetic or archaic. However, I think that Polanyi’s essays that form a sustained argument against market determinism raise the still open and continuous challenge of the self-determination of humanity: how can we use the social sciences to solve our social and political problems if values, norms and standards are the subject of undetermined human choice? In Polanyi’s words that manifest the neo-Kantian tradition and heritage wherever it exists: “Unless man can define his destiny, he cannot hope to master it. Unless his social purpose is present in the individual man, he cannot assimilate the new knowledge [of all the sciences, including the social sciences] without losing his way. Unless his interest in life and the universe fixes for him the direction in which his own evolution shall proceed, it is vain to expect that he can remain master of his own changing nature and not lose his grip on life.” (117-8)