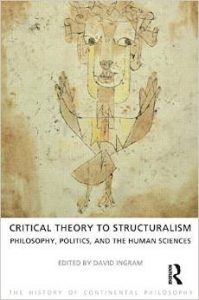 This fifth volume of The History of Continental Philosophy focuses on developments in philosophy (especially political philosophy), political theory and social sciences between 1920 and 1968. Continental philosophy, as defined by Alan D. Schrift, the series general editor, is understood in the whole series ‘historically as a tradition that has its roots in several different ways of approaching and responding to Immanuel Kant’s critical philosophy, a tradition that takes its definitive form at the beginning of the twentieth century as the phenomenological tradition, with its modern roots in the work of Edmund Husserl.’ (vii)

As observed in the Introduction, by David Ingram ‘the years separating 1920 and 1968 were cataclysmic for the world and for philosophy. The destruction wrought by two world wars could be seen as an indictment of Western civilization itself’ (1), which led to a reanalysis and reevaluation of the relation between the humanities and science. Further political developments, such as the Cold War, the Paris Revolt of May 1968, and the gradual demise of revolutionary Marxism very strongly influenced political thought and philosophy. Ingram presents the panorama of political and social developments, and discusses the search for new identity, social, political, and philosophical.

Several chapters in the reviewed volume concentrate on the presence of Marxism in Continental Philosophy, and different dimensions of this presence. In the first chapter, Chris Thornhill discusses ‘Carl Schmitt and early Western Marxism’. After presenting the context of the intellectual origins of Schmitt’s work, he focuses on the relations between the German philosopher’s work and liberalism, classical Marxism, and early Western Marxism. Thornhill notes the central importance in Schmitt’s theory of the claim ‘that liberal theories erroneously assume that peace is the natural condition of human coexistence’ (27), and stresses his emphatic hostility towards Marxist political theory, tracing at the same time some striking similarities with Schmitt’s critique of liberalism in the works of Georg Lukács and Antonio Gramsci. Schmitt’s ideas proposed a concept of the political designed to overcome the theoretical antinomies of liberalism, and as such contributed to the self-critique of Marxism ‘by proposing a theory of volitional conflict and sovereign will-formation as the only means of securing order in highly unstable and deeply contested societies.’ (43)

The Frankfurt School was one of the most important developments in humanistic Marxism. Chapter 2, by John Abromeit, traces ‘The origins and developments of the model of early critical theory in the work of Max Horkheimer, Erich Fromm, and Herbert Marcuse’, whereas chapter 3, by Deborah Cook, is devoted exclusively to Theodor W. Adorno. John Abromeit understands the notion of ‘critical theory’ in the narrow sense, as referring to the first generation Frankfurt School thinkers, and he examines the early collaboration of Horkheimer with Fromm, and the later contribution of Marcuse, especially his key role in introducing critical theory to a broader audience in the 1960s. The chapter is rich in background information on the historical, social and political context, in which the School originated and flourished, a school that would contribute ‘significantly to the development of the disciplines such as sociology, influence the methodology of empirical research, reshape Marxist theory and Freudian psychoanalysis, and act as a powerful stimulus for political activism during the late 1960s and early 1970s.’ (81) These words, by Deborah Cook, open the chapter on Theodor Adorno. The author mentions Adorno’s philosophical partnership (and friendship) with Horkheimer, briefly discusses his earlier work in which Adorno developed a psychological perspective on labor, and the philosopher’s major work, Negative Dialectics, devoted to ‘exploring the alternative cognitive paradigm of nonidentity thinking.’ (93) Cook concludes the chapter observing that the legacy ‘of first generation critical theory lies not only in the diagnosis of conditions under which individual freedom and autonomy have been substantially undermined, but in its sustained defense of the need to envisage conditions that are fundamentally different from and better than these.’ (102)

The next two chapters are devoted to two highly original, intellectually independent and most influential thinkers: Walter Benjamin and Hannah Arendt. James McFarland presents the life, achievement, and legacy of Walter Benjamin, who was recognized during ‘his lifetime as one of the most adventurous and penetrating thinkers of the Weimar period in German cultural history.’ (105) Indeed, the achievement of Benjamin exceeds the scope of philosophy, political thought and social studies, and his legacy is recognized in contemporary historical studies, aesthetics, theory of literature and translation; his work becoming ‘touchstones of the contemporary intellectual landscape.’ (106) McFarland offers a careful reconstruction of Benjamin’s intellectual career, discusses his increasingly radical perspective on the experience of modernity, and in the conclusion mentions Benjamin’s reintroduction to the wider audience, after the 1955 two-volume publication (by Adorno) of his essays, and also the most recent translations and editions of his work.

In Chapter 5 Peg Birmingham is concerned with ‘Hannah Arendt: rethinking the political’. Arendt’s achievement in political philosophy makes her one of the most interesting and important figures in twentieth century philosophy and political thought. She ‘saw that the fundamental task of political theory today is to radically rethink the concept of the political after the event of totalitarianism revealed the bankruptcy of our traditional categories of moral and political thought.’ (133) Birmingham briefly discusses Arendt’s work on totalitarianism and the modern nation-state, on freedom, power and action, and, very interestingly, the ideas of natality (the capacity to be born) and mortality. She claims that whereas Heidegger is the thinker of mortality understood in terms of being-towards-death, Arendt ‘is the thinker of mortality understood primarily in terms of natality, the fundamental event of beginning’ and that for her ‘the political concern for immortality is rooted in this event of natality in which the beginner appears and as such desires endurance in time.’ (148)

Peter Tracey Connor devotes the next chapter to Georges Bataille, a philosopher who ‘occupies an important if eccentric position in the history of continental philosophy’ (155). Bataille developed his method of meditation, an approach to thinking that takes into account not only what a human subject can know, but also the experience of ‘nonknowledge’ and ‘unknowing’, assumed by him to be the core of human existence. Bataille worked extensively on experiences, emotions, and eroticism, hence his work might seem to be of interest rather for cultural theorists, than students of political philosophy and social sciences; however, as noted by Connor, he also promoted the work of Nietzsche, and contributed ‘significantly to the agenda of poststructuralist philosophy.’ (173)

In chapter 7, William L. McBride discusses ‘French Marxism in its heyday’. He provides the necessary social and historical background, and traces the careers and influences of numerous French intellectuals, including Alexandre Kojève, Jean-Paul Sartre, and Maurice Merleau-Ponty. In the conclusion to his chapter, McBride notes that adherence to the Marxian tradition remains strong among some contemporary French philosophers (for example, Étienne Balibar, to name one of the most prominent), however, no ‘objective observer of France today could possibly claim that that [heyday] period [of Marxism] is anything but a now-distant memory.’ (198)

Chapter 8, by Lewis R. Gordon, is devoted to ‘Black existentialism’. Gordon observes that black existential thought focused on the meaning of freedom an liberation, the degradation of reason in the modern world, and crucial issues in philosophical anthropology, raised ‘by the challenges to the humanity of black people posed by colonialism, slavery, and racism in the modern world’ (199). Before discussing more theoretical issues, Gordon mentions developments within music and literature, since ‘the spiritual, as is well known, is an early aesthetic expression of black suffering’ (201). One of the most interesting issues, explored both in literature and theoretical studies, is the theme of invisibility, associated with Ralph Ellison, and his novel Invisible Man.

Thomas F. Broden provides a concise overview of ‘Ferdinand de Saussure and linguistic structuralism’. Linguistics, along psychology, sociology, and anthropology, established itself as an independent discipline in the late nineteenth and early twentieth centuries, gaining institutional recognition and widespread influence. One of the founding fathers of modern linguistic was Ferdinand de Saussure, who redefined linguistics in the spirit of the ‘era’s scientific epistemology, elaborating an explicit theory and methodology, emphasizing a holistic approach, and establishing a synchronic perspective on a par with historical perspectives.’ (222) Linguistic structuralism was one of the most successful methodologies and intellectual movements in mid-twentieth century, influencing disciplines as diverse as semiotics, anthropology, literary studies, philosophy and economics. Broden discusses both the success of linguistic structuralism, and its limitations, and observes that ‘structural linguistics wrestled with issues that remain open-ended questions today in the language sciences and indeed throughout cognitive studies, notably how higher-level abstract categories are integrated with lower-level concrete signs, and how general phylogenetic structures are conjugated with particular historico-cultural processes.’ (244)

The next two chapters are devoted to two significant developments within structuralism, namely the work of Claude Lévi-Strauss (chapter by Brian C. J. Singer) and Jacques Lacan (chapter by Ed Pluth), respectively. Singer presents the main themes in Levi-Strauss’s anthropology, especially his work on kinship, myth and totemism, and though he points out that ‘it is difficult to speak of Lévi-Strauss’s philosophical legacy’ (257), his intellectual influence, also upon philosophers, is beyond doubt. Lacan, on the other hand, can be viewed as an antiphilosopher, and though ‘references to philosophers are widespread in Lacan’s seminars and writings’ (274), his ‘influence on the major philosophers of his own generation was negligible.’ (276) As pointed out by Pluth, neither Sartre nor Heidegger seemed to have read Lacan, however, he has exerted some influence on some later philosophers, such as Louis Althusser, Paul Ricoeur, and especially Slavoj Žižek and Ernesto Laclau.

In the last chapter, David Ingram focuses on ‘Late pragmatism, logical positivism, and their aftermath’, and observes that ‘positivism is closer in spirit to Husserlian phenomenology and French structuralism, while pragmatism is closer in spirit to Heideggerian existentialism and its French progeny’ (282); however, he also notes that ‘in contrast to their continental counterparts, pragmatist and positivists shared the naturalistic approach to philosophical explanation that had been the hallmark of Anglo-American philosophy since Francis Bacon.’ (282) Ingram succinctly presents classical pragmatism (especially the work of George Herbert Mead and John Dewey), positivism, the contribution of Karl Popper, and some recent developments in American pragmatism (discussed in full in other volumes of the series). Ingram’s chapter very clearly demonstrates the benefits of convergence of different traditions, especially American pragmatism and German critical theory, and the positive effects of mutual opening to different trends and schools of thought.

Critical Theory to Structuralism is rich in facts and data, and also in careful historical, political, and philosophical analyses and interpretations, making the reviewed volume an indispensable work of reference for a very important period in the development of philosophy (and not only Continental Philosophy).