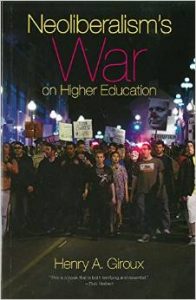 Nicolina Montesano Montessori is a senior researcher in the field of discourse studies. She has …

This book presents a breathtaking account of the dominant neoliberal hegemony, alternatively referred to as economic Darwinism, casino capitalism, neoliberal fascism, free-market fundamentalism and authoritarianism, and its devastating impact on higher education, the pubic sector, democracy and civic life. The main argument is that neoliberal authoritarianism represents a counterrevolution that serves the rich and powerful at the expense of the public sector, the middle and working classes. It sees public spending as a pathology and transfers public issues to the realm of the individual responsibility of citizens, who are left at the mercy of their own resources. Those groups who do not actively contribute to profit, such as youth, the poor or migrants, become the disposables of this new society. Neoliberal authority transforms higher education from an institution of critical learning and reflection indispensable for a healthy democracy, into a corporate business reduced to teaching skills serving the needs of the economy. Neoliberal governance proclaims the market economy and economic growth as an inevitable, singular truth. It promotes free trade, privatization, commodification, deregulation and marketization. The alleged war on higher education is fought from different angles: first, by drying up public funding through a tax system that favors the rich, while reducing state budgets, which leads to austerity for universities and other public services. Second, neoliberal governance imposes educational reform towards a skill based, measurable instrumental concept of education, turning knowledge into a commodity.

This argument is developed in an Introduction and six chapters, four of which are written solely by the author, while chapters three and four are co-authored with Brad Evans and Susan Searls Giroux respectively. The seventh chapter represents an interview with the author by Michael Peters in which the author describes his personal history as an academic descended from a working class family. He describes the intellectual strands of thought and academic thinkers that influenced him. He describes his ongoing commitment to a critical pedagogy that gave rise to an academic career that connected critical pedagogy to a public involvement with larger social processes and unveiled the negative and dangerous effects of dominant power structures in the world. In the particular case of this book, this endeavor is directed against the hegemony of the neoliberal doctrine found in both politics and the so-called casino economy that since the Reagan and Thatcher days in the early eighties has become dominant in the US and the UK as well as other countries.

This review provides an overview of the contents of the book, discusses its structure, and ends with an evaluation and a recommendation for readers. The Introduction and chapter one describe the main features of neoliberal’s war on education and the symptoms of the dystopian university it has created. The dystopian mission of higher education is to produce robots, technocrats and trained workers (31), while separating education from democratic discourse, public values and civic courage (chapter one). It is run by zombies who create an institution of conformity and instrumentalism, from which the humanities are eliminated and with them, poetry, critical thought, history and imagination.

Chapter two explains that US youth have not yet engaged into social struggle as their counterparts did in London, Istanbul, Athens and Montreal. Giroux explains that this is, in part, the result of the normalization of neoliberal society, partly due to the dogma of the inevitability of the global economy. However, Giroux points out that it will be only a matter of time before they will join the wave of international protest, such as the Occupy movement.

Chapter three depicts intellectual violence in the age of gated intellectuals. Gated intellectuals bend to the will of the market that funds their research and repeat neoliberal ideology and dogma. Whatever is left of academia is disconnected from the real. It proposes nothing but a manufactured reality without any concern to experience the world. Their research is instrumentalist (91). Gated intellectuals support a singular view of the inevitability of economic law and train their students to adapt to the new global market.

Chapter four deals with the policy of privatization and higher education’s involvement with Big Sports, Big Money and the repressive impact on the university. It describes the sex scandal at Pennsylvania State University where a sports coach had sexually abused at least eight underaged boys for several years. The chapter addresses both the sex scandal and the scandal of authority hiding the problem and ignoring complaints until the scandal came into the open in 2012. Giroux relates this incident to a much wider problem: under neoliberal governance there is not enough democratic control either of capital or of public behavior and practices. He makes the statement that this was not just a problem for Penn State University, but for America at large.

Chapter five emphasizes the need for public intellectuals in academia to dream the impossible, to keep human justice on the agenda and to insert critical thinking and knowledge in academia. Academics should be both critical teachers and social activists. They should raise social topics such as climate change, social justice and the impact of the free market economy in their classrooms. They should seek alternative podia to reach a variety of audiences. They should dream the impossible and inspire others to do the same.

Chapter six describes in detail the massive student protests, backed up by progressive social movements, in Quebec against the planned increase of fees to enter university. It was also a protest against the neoliberal state that invests in warfare rather than welfare. The Quebec revolts where initially directed against the fee system, but continued to protest against the corporatization and marketization of the university. They culminated in massive demonstrations that were violently repressed by the state. However, the student protest was able to connect to other groups such as unions and social movements, thus showing that their causes belong to wider social problems that need to be addressed and resisted.

The book is written like a well documented pamphlet rather than a scientific account. Chapters lack a clear structure in terms of purposes and conclusions, the concept of neoliberalism is not defined but taken for granted in its meaning of an ideology that dictates the free market economy. There is overlap and sometimes repetition between the chapters. The book contains the personal perspectives and opinions of the authors and their concerns and description of the problems of neoliberal dominance. The descriptions are sometimes blunt and direct, as in: “a political culture in which ignorance, stupidity, lies, misinformation and appeals to common sense have become the dominant, if not most valued, currency of exchange” (56-7). In this sense, the book is brave in being so outspoken and determined to disseminate a deeply felt concern about and objection against the neoliberal system and the implied disappearance of the university as a critical institute and therefore an indispensible pillar of a healthy democracy.

Giroux supports his personal account meticulously with references to reports, the press, and to intellectuals such as Bourdieu, Foucault, Bauman and Castioradis, Chomsky, Simon Chritchley and Chris Hedges in the endnotes. This makes it a particularly interesting read, since it contains a complete bibliography of the phenomenon of the neoliberal university and the many critiques it has received. This documentation makes the book of interest to a great variety of readers, such as academics, educators and activists, since each of them can follow up their own interests in the end notes. The references to many progressive thinkers make the book definitely interesting for the readers of this Review. The book speaks out and is a must-read for any reader with a concern for a just, humane and intelligent society. It should remind all of us not to take neoliberalism and the free market economy as inevitable phenomena, but as an issue of choice that causes alarming inequality in the world and that can be tackled by democratic means.