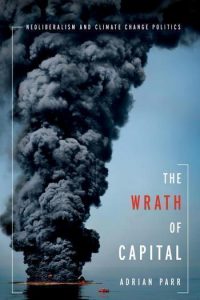 David E Toohey, PhD is an Associate Professor at the Nagoya University Institute of Liberal Arts …

An increasing number of books and articles explore the politics of climate change, especially from a political economic perspective. Within Marxist philosophy and Critical Theory, there are a few different perspectives. Some wonder why humanity cannot approach the immanent threat of climate change (Dodds 2011; Short 2011). On the other hand, capital is argued to mobilize environmentalism as a way to prevent socialism (Heartfield 2008). Similarly, the transnational capital class may view environmental degradation and inequality as threats, and thereby aim to solve them (Sklair 2000). Ecological concerns are portrayed as central to Marx’s philosophy, but not always to Left politics (Foster 2000). On the other hand, there are also working class relationships to land (Williams 1973) and theoretical reevaluations of humanity’s relation to the natural, physical world (Bennett 2010). Within this context, Adrian Parr’s The Wrath of Capital: Neoliberalism and Climate Change Politics provides an excellent combination of scientific data, events, and theorization. It thereby explains global climate change and uses a wide array of theory that clarifies how Marxist philosophy provides an alternative to neoliberal environmentalism. Early on, Parr explains that the focus is on discursive aspects of environmentalism: ‘it matters who claims ownership of the discourse and politics surrounding environmental and climate change and how they do so” (7). While this is framed as discursive, Parr actually explores capital’s appearances in discourse. Like many books on environmental discourses, discourse appears as a theoretically settled word requiring no elaboration before application to events. Nonetheless, this book will be of interest to those interested in pushing Marx’s theories of surplus value and commodity fetishism to the forefront of understanding green, and not so green, economies.

Parr juggles two different audiences: 1) scientific and policy-minded environmentalists, and 2) environmental Marxism and Critical Theory. Consequently, the implications for Marxist philosophy are not as upfront as might be expected from the title, and appear somewhat later in the book. This results from a strength of the book. Parr provides a tangible context to help readers understand applied theory. Marxist analysis starts with a simple elegance that explains how ‘green commodities’ and ‘the image of a green lifestyle are turned into a fashion statement’ (20) by capitalism. This is mentioned in Chapter 1 before more elaborate Marxist theory is explored in Chapter 2.

A central claim is that, since discourse is important, if green-minded capitalists own the anti-establishment discourse, protest for the environment will be ineffective and irrelevant (7). To support this, a variety of green-capitalist arguments are spotlighted to support analysis of how green capitalism will continue the violence of capital accumulation. After this is made clear, Chapter 2 moves into an intricate and complex discussion of the non-materiality of value. Marx’s theorization of the value of commodities is used to explain carbon: ‘as an invisible entity, carbon is the pure form of Marx’s concept of value’ (34). This is supported with Marx’s theory of ‘commodity fetishism’: ‘the fetish prevents a person from appreciating the true environmental and social costs of a given commodity’ (35). Therefore, carbon offsetting can never be about the actual change it will or won’t create. Rather it is about a false feeling of having helped the environment, or more specifically about selling this illusion.

Though it may be difficult for those uninitiated in Deleuzian theory to understand, through a writing strategy of written juxtaposition and crosscutting, The Wrath of Capital uses Marx’s theories as a conceptual link between Slavoj Žižek’s work on trauma and Gilles Deleuze and Félix Guattari’s work on the slipperiness between anti-establishment and establishment positions. There is significant tension between these works. Therefore, it is impressive that Parr is able to use them in a way that is productive to understanding how climate change affects some of the most oppressed peoples and voiceless non-human life in this world. In Chapter 8, which engages the reader with theoretical explorations of trauma, Parr discusses the links between the British Petroleum Deepwater Horizon oil spill and the global South. This focus on critical theories of trauma, thus moves slightly away from the book’s emphasis on understanding discursive political economies to a slightly more economic and political discussion of how South Sudan, southern Nigeria, and the Deepwater Horizon Oil spill are connected by the concept of ‘oil capitalism’ (141). The theoretical focus then shifts again to emphasize, following Žižek’s influence, that the desire to clean up the Gulf of Mexico is about preserving an image, rather than looking for root causes (141-2). This is a very good conceptual point about the displacement of equality in the popular American imagination and more conservative tendencies of people to recognize problems only visible in their own countries, and to ignore how their own governments and policies affect the global South. Yet Parr is not simply calling for Americans to ignore problems in their own country and instead focus more on impoverished nation-states.

Parr is to be noted not simply for moving climate change analysis beyond technical analyses based on science and policy. The Wrath of Capital does this. However, where many works may simply look at how one group is affected—say climate refugees, the working class, or oppressed ethnic and racial minorities—The Wrath of Capital details how climate change politics harm activists, beings who cannot speak (livestock), working class and African-American neighborhoods being gentrified in Chicago, African populations, women, and perhaps the unborn. Thus issues of non-identity—i.e., those who cannot speak such as ‘other species and ecosystems’ (54)—are brought into juxtaposition with identity politics-promoted ‘environmental racism’ scholarship, and issues of severe global economic inequality found in post-colonial studies. This is a bold juxtaposition which traverses a few different sub-fields and disciplines. Nonetheless, it does not lose sight of traditional Marxist class analysis.

Much of the concern I have with this book does not negate its promising points. Shortcomings of this book can best be situated in ever-present tensions in the field of environmental politics, as well as Marxist philosophy and critical theory. Parr quotes Deleuze, but sometimes provides minimal explanation of the contents of the quotations, or how they relate to the theories and data elsewhere in the book. This is similar to saying ‘agree with this book because I am quoting Deleuze’. For example, Parr applies Deleuze’s treatment of Hume’s philosophy to imagine how protests against global, neo-liberal policy-influenced water crises could help create ‘alliance across generations, species, and communities’ (71). This appears to be an important point, but its relevance is clarified merely as the ‘core of Deleuze’s discussion of David Hume’ (164 n.59), rather than providing a justification of its relevance. This is not just a technical point about writing. Since Parr has written frequently about Deleuze in Deleuze and Memorial Culture (2008) and Hijacking Sustainability (2009), this is somewhat jarring. Deleuze’s approach to Marxism was unconventional (Holland 1999, 106-7), suggesting different agents of ‘production’, including the natural world (111); therefore, an orthodox, authoritative reading of Deleuze is a less convincing aspect of The Wrath of Capital.

While it is often productive to mention theorists with fundamentally different viewpoints, providing detailed explanation of the tensions between them often helps illuminate their compatibility. The Wrath of Capital largely seems to avoid these tensions, and in the case of discourse does not specify what type of theory of discourse informs the book’s logic. For example, when explaining how Deleuze and Guattari’s ‘axiomatic’ of capital affects women’s bodies (50) Parr says that ‘the dominant discourse ostensibly claims that the reproductive body of poor women needs to be regulated’ to preserve ‘life on earth’ and ‘modern democracy’ (46). The nature of this discourse is neither identified through theory nor detailed accounts of the actual scope of evolution of this discourse. Rather, Parr discusses how capitalism both frees and uses women’s reproductive labor to further elaborate a quote of Deleuze and Guattari. More elaborate explanation or reference to secondary sources on discourse- or Deleuze studies might have helped this complicated shift from discursive to Deleuzian theories. Then again, in comparison to much of the literature on environmental politics, using the term ‘discourse’ without mention of specific discursive theorists is hardly unusual.

All in all, despite some of the abovementioned issues, this book pushes the literature further into an applied Deleuzian framework based on a solid understanding of surplus labor and commodity fetishism. Therefore, it provides an indispensable contribution to both Marxist scholarship and Deleuze studies. The following things remain open for further study. First, what is the role of theory in regards to practice in environmental politics? More specifically, can theory have an equal footing amidst a practically-orientated debate that often prioritizes science and policy, or should environmental theoretical literature operate outside these disciplines? Second, how should theory be written about? It seems that perhaps because Parr mobilizes scientific and policy data—which invokes an authoritative expert discourse—theory is often communicated as a command, rather than as a chance to think otherwise. This may be necessary to mobilize people to act in an environmental crisis, and accordingly may not be a problem. However, this is something that critical theory has often avoided doing. I do not propose an answer as to which practice is right, but rather would like to point out that there is somewhat of a difference between The Wrath of Capital and other critical theory scholarship. This is, therefore, something that is worth thinking about when approaching Marxist philosophy and Critical Theory writing on environmental politics.