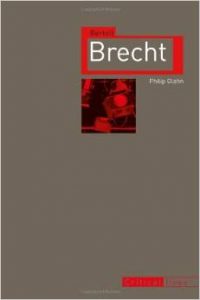 In this book, the author presents a brief biography of the great Marxist playwright, poet and social philosopher, Bertolt Brecht. Though it is classified as a biography, such a label obscures, in part, all of what Glahn has accomplished with it. More than just an exposition on events of Brecht’s life, the book is also a subtle, discerning intertwining of biographical moments, erudite commentary on Brecht’s artistic expressions, and elucidation of and engagement with Brecht’s philosophical concerns. These things are projected against the scrim of world historical developments and tuned into the key Brechtian idea that ‘theory and practice, the ideal and the real, art and life, need to be understood in their interdependent relationality, a position of tension and movement from which to see and act, learn and teach’ (7).

The book divides Brecht’s life into six periods. Moving chronologically but in dialogue with other epochs, each period is arranged around a different thematic concern. The first chapter examines Brecht’s early years in Augsburg and the work produced during this period in light of the ‘confusion and dissonance’ (29) of the time. One of the chief arguments of the chapter is that the social turbulence of the period provided Brecht a means of dissecting and connecting ‘traditions and attitudes in the face of those clamouring for a sense of purpose and continuity’ (29) and showed him that ‘competing belief structures’ were vying for adherents (47). The chapter also exposes the nascence of an important idea in Brecht’s thought—that art has a ‘use-value’ and ‘function as commodity’ (43). The second chapter explores the years spanning Brecht’s move to Berlin until his introduction to Marxism. In it, Glahn examines this period through Brecht’s persistent emphasis on the idea of the ‘historical specificity of artistic engagement’ and understanding of art as ‘a critical practice that changes according to the contingency of context’ (56). In the third chapter, the author examines the period of Brecht’ life after his introduction to Marxism until his exile. Glahn views this period as one of artistic refinement based on a more developed social theoretical viewpoint and an extension of Brecht’s preoccupation with ‘issues of ownership’ (93). The chapter investigates important aesthetic contributions of Brecht’s including his Lehrstüke or learning plays and his Versuche (experiments), a collection of plays, poems and stories designed to reveal individual, interconnected realities of bourgeois society. This chapter contains interesting and well thought out analyses of several of Brecht’s Lehrstüke. The subsequent chapter deals with Brecht’s Scandinavian exile. It provides an account of his life in Denmark, Sweden and Finland set against the continued menace of Nazi European expansion. It also investigates Brecht’s continued productivity despite the ever present threat of existential despair the Nazi expansion posed. In the penultimate chapter the author covers Brecht’s American exile, a period of high productivity and low commercial success. One of its central focuses is the experience of alienation Brecht felt during this time, a situation which was exacerbated by living and working in a time and place which was fiercely antithetical to the type of social and aesthetic changes Brecht sought. It includes accounts of Brecht’s work with Charles Laughton on Galileo and his hearing in front of the House Un-American Activities Committee (HUAC). The final chapter examines Brecht’s return to Germany and the establishment of his Berliner Ensemble in East Germany (the DDR). Thematically it is largely concerned with Brecht’s relationship to authoritarianism. While recognising the subtleties and possible contradictions in this relationship, Glahn ultimately paints a portrait of Brecht as essentially anti-authoritarian and continuously dedicated to the notion of freedom, a portrait this reviewer agrees with.

This book has too many positive attributes to enumerate all. However a few should be noted. To begin, Glahn provides a useful general overview of Brecht’s thought and methods. While it remains by and large at the level of an overview, it is not without depth. Glahn seems to have an uncanny ability to synthesise Brecht in such a way that the result is both accessible to a general readership but not stripped of intellectual rigour. One may be tempted to call it an economical intellectualism in which points are made without un-needed words.

Second, the book is replete with refreshing surprises in terms of the material it covers. For example, there is some analysis of Brecht’s relationship with leftist sociologist, Fritz Sternberg. While one hears much about Brecht and Benjamin or Brecht and Korsch this is a relationship which is explored much less frequently. Additionally, Brecht’s works examined in this book are also quite refreshing. Instead of steering the reader down well-worn paths of Brecht’s works, we are taken down less well trodden trails. For example, Glahn leads us through an insightful analysis of Brecht film, Kuhle Wampe, dealing with its aesthetics, thematic considerations and its reception. However, the author says it was Brecht’s ‘only realised film project’ (112). Here the author overlooks Brecht’s 1923 movie, Mysterien eines Frisiersalons (Mysteries of a Barbershop) which he made in collaboration with Erich Engel, and which starred Karl Valentin. However, this was not a feature film and it was not released until well after Brecht’s death. So perhaps it is less an error of fact than a definitional problem. Either way, it is a peccadillo the reader will easily forgive.

Finally, the book provides discerning incursions into Brecht’s social philosophy. While not a full exposition, the book does offer a fair accounting of the broad positions Brecht took. With that said there is a point or two where this reviewer disagrees with the author. Particularly with regard to the author’s assertion that ‘Emancipation, to Brecht, is the ownership of the mediation between self, idea and reality’ (13). This is too idealistic to capture fully Brecht’s position because it negates his very clear material concerns. While it is an important element of emancipation for Brecht, this mediation is only a necessary but not sufficient step in the process towards emancipation. Through it the working class would be able to see through the obfuscations of bourgeois ideology and subsequently put an end to its material deprivation and exploitation. Ultimately, however, it is the end of exploitation which is emancipation for Brecht. The mediation which Glahn discusses is only a means to that end.

Although an outstanding work, the book does have some shortcomings. As a whole it doesn’t really offer any new readings of Brecht that are going to shake up Brechtian Studies, but to be fair this doesn’t seem to be the objective. Probably the approach taken is better suited to connecting with the broader audience for whom the book seems to be meant. Nevertheless, committed dialecticians may be left wanting. Also, inexplicably, the book doesn’t have an index. A minor point, one may argue; but, writing this review without the benefit of one has proved a real inconvenience. Other scholars who may wish to use this text will also find this problematic.

Notwithstanding these shortcomings, this is one of the best entry points into Brecht, biographically, historically, thematically and artistically. Glahn has demonstrated a singular ability to capture the essential elements of what Benjamin called the ‘complex phenomenon’ which is Brecht, in all his intricacies, in a penetrating and pithy fashion. It is a fantastic incursion into Brecht as a man, Brecht as a social and aesthetic thinker and Brecht as a revolutionary. In this regard, I believe this book will prepare any reader well for engaging with the entire corpus of Brechtian scholarship and Brecht’s own theoretical and artistic writings. I also believe it could prove to be an effective teaching aid at the undergraduate level because of its accessibility and handling of important Brechtian concepts, and it may also be of use at the graduate level.