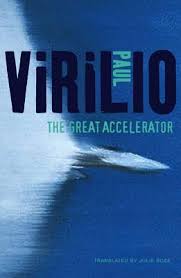 Mohammad-Ali Rahebi is a PhD candidate at Shiraz University, Iran. His earlier papers deal with …

The most recent work by Paul Virilio to be made available in English, The Great Accelerator, contains three essays bound together by their common “dromological” investigations. The title of the book, originally the title of one of the three articles that make up the volume, immediately reminds one of the CERN project, the miles long multinational “cathedral” for accelerating particles to very high velocities. Of course, this is one of the more obvious references of the term, as anyone familiar with the French dromologist can guess. Like his previous works, The Great Accelerator also has the malignancy and dehumanizing aspects of speed and an accelerated reality as its main concern; unlike the more recent works, however, the three essays collected here are much more “social,” that is to say they take their concerns from the every-day, from the more socially widespread trends such as “couch-surfing” or the emerging automobile market. This is not a sign of a more superficial attitude (or a more fundamental one, for that matter) on the part of the author; rather, they are proof that the emerging patterns Virilio saw in modern art or the progress of certain forms of technology have now spread to a much more public and familiar level and are now less a threat than a reality. This realization makes reading Virilio’s philosophy much more urgent and necessary.

In a certain way, this ensemble of essays can be seen as following Lenin in an attempt at retracing the contours of the “highest stage of capitalism”. Where the Imperialism of Lenin was marked by the emergence of finance capital and global monopolization, however, the turbocapitalism revealed by the philosopher of speed involves an impending end to speculation and rational economy through systemic crises brought about by the computerization of exchange; an exchange now taking place in picoseconds and nanoseconds. The trend described by the unceasing speeding-up of “time tables” (emploi de temps) heralds the approaching “End of Time” (80) where the “ACCELERATION of flows … will then supplant … the historical ACCUMULATION of stocks of wealth” (17). There is little likeness to Marxist analyses beyond this, however, as Virilio curtly dismisses the usual Marxian concepts and provides his own “dromological” toolkit for a premonitory glance at turbocapitalism and its fatal crisis.

One of the new concepts he develops in these writings is that of “exodus,” the forced exile of a humanity bereft of all habitat. A particularly interesting point about these articles is their critique of the ecological mindset, which is associated with Soviet “cosmism” and in line with the continuing exodus of humanity. In fact the environmental discourse is seen as the ideology of the mass exodus, promoting the ultimate displacement of all humanity along all possible vectors. Virilio’s hostility towards those who warn of ecological catastrophes might be rooted in a dialectic antagonism of time to space: while he sees the true danger to lie in a temporal crisis, a compression of time and a destruction of all timetables, the ecological mindset rather defines the problem as one of spatiality. The latter sees the current exodus as a way to handle the crisis of the lack of space, while in fact by doing so, they are releasing the human flow along a (inter)planetary wild goose chase and thus increasing the general acceleration of flows as well as its stakes. The search for space is already useless, Virilio believes, because sedentary life has become obsolete due to the emergence of an inhuman temporality in which habituation is decoupled from the habitat to form a life on the run.

The acceleration of the flow of human life has put an end to all forms of sedentary life as all times become the time of the instant (“HERE is no more. Everything is NOW…” 20): with the extension of hitchhiking into “couch surfing,” the once exemplary disappearance techniques of Howard Hughes – whose different homes with identical layouts Virilio had analyzed in the 1970s – have become everyone’s destiny.

The internet phenomenon of “couch-surfing” is indeed a very good manifestation of the new modes of temporality and speed. This is, however, not due to its being Internet based or its “social media” character, rather it is a popular and ubiquitous version of one of Howard Hughes’ manias which Virilio himself had noted and analyzed much earlier. Hughes, the pioneer of speed, the ultimate prototype of the human of the new times, had resorted, late in life, to a hermetic (or rather hermetically sealed, against time qua delay) life, and to that purpose had built identical houses in different countries, all equipped with an indoor airplane hangar. He would go from one house to another without ever leaving his house, he was thus the first to incorporate the paradoxical essence of the inertia of hyper-time, the single moment that has an inertia of its own. Hughes had invented the infinite speed of travel whereby he was simultaneously everywhere and at home, at home everywhere and everywhere at home. Decades later, the entire human race has entered Hughes’ mania, the entire planet in exodus: humans themselves have become the final stream in the flux of a turbocapitalism threatening with spilling over. The “couch-surfer” is significant and iconic only as a more advanced and progressive instance of the traveling, speeding masses. Just as the couch-surfer learns to make herself at home everywhere (at home in transit), inhabiting the different transient couches offered, so too the couches themselves, like the hosts’ home and the host herself are becoming more and more the same. Exposed and de-privatized by the surveillance/information technologies, every domicile just like every human is being synchronized. Just as Virilio declares, this is no longer an issue of “standardization of opinions/tastes” but rather a “communism of emotions.” Not only is there similarity but also simultaneity, and not only of decision-making patterns, but also of affects. Indeed, the choice of the term “communism” is ingeniously accurate, despite appearances. The vision of the communist society developed in the Communist Manifesto (and German Ideology) for example, is in perfect keeping with the logic of turbocapitalism in its insistence on efficiency and planned productivity as the primary goal. The similarity of imperialism and specially the later transmogrification of capitalism in the 1970s (the planner state, and then the “crisis” state as Negri called it) to the image of the communist society has already been noted by the later Engels and Lenin as well as recent authors such as Negri and Wallerstein.

This is perhaps among the reasons that Virilio distances himself from orthodox Marxism and deems the latter incapable to deal with and analyze the current reality. In one passage Virilio relegates Marxism with its analysis of the exploitation of the workers to a past temporal model and hence no longer tenable: `If the aerostatic form of sedentary human settlement was once geographically indexed, the aerodynamic form of exclusion, and of the expelled that now prevails over of the exploited of full employment, is not indexed at all’ (43, my emphasis).

Thus Virilio re-formulates his break away from orthodox Marxism in dromological terms. His criticism of orthodox Marxism’s concepts and toolbox, which he deems outdated along with the sedentary/urban form for which they were developed, is dispersed throughout the whole book, making a systematical overview hard to provide. Among the highlights, however, is the statement that the accumulation of wealth (as the goal of sedentary capitalism) has been superseded by the “ACCELERATION of flows of all kinds.” The very notion of accumulation now suggests to the turbocapitalist a blocking, a delay, stagnation: accumulation belonged to the walled-up “city of men.”

Perhaps more importantly Virilio points to an “accident in knowledge” among the effects of the infinite speed of the cybernetic era. Virilio’s mention of this issue, however, is brief and passing and hence inadequate. The acceleration of reality and in this instance the increasing efficiency and speed of technics has rendered knowledge obsolete. Where self-altering, adaptive, “intelligent” machines operate with hyper-efficiency and optimize solutions in fractions of seconds, there is no room for a knowledge operating with particular-universal judgments; the lengthy learning-time is simply superfluous. What remains of science in the era of the “proletarianization of the mind” (as Stiegler calls it) is merely a protocol-producing discipline, one that such “sciences” as Behavioral or Cognitive Sciences already represent. Virilio briefly (and rather cryptically) points to this by saying: “science has in fact become not only functional but also, above all, functionalist” (75, my emphasis).

In fact, it is not only knowledge or judgment that becomes obsolete or marginal; talking of the stock exchange and the recent “systemic crisis,” Virilio rightly describes the market crash as a “choc de la confiance” a crash that is only too understandable given that “confidence can’ t be instantaneous or automatic.” (9).

In truth, what renders the cybernetic phenomenon inhuman is not limited to its effects on temporality: the fact that the “market” can no longer be seen is not only because it is running too fast; the cybernetic devices (such as programs) used in analyzing data and making investment strategy choices are more and more non-representational, protocol based autonomous agents dealing with raw data in real-time. The cybernetic organon has no need to turn data into significant, human-sized information packets in order to process it and make choices with regard to it; representation of data as information digestible for the human being is a post facto operation, a luxury feature that has no place in “serious business.”

The era of “information” as the ultimate domain of the modern human, as Heidegger saw it, is passing on to the era of pure, inhuman data and “intelligence without representation.”