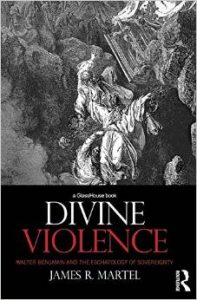 The end of Hosni Mubarak’s authoritarian reign in Egypt is the starting point of James R. Martel’s Divine Violence: Walter Benjamin and the Eschatology of Sovereignty. While at the outset this historical event “is filled with endless possibility” (1), it is the author’s belief that this moment of revolutionary potential will end and Egypt will return to normalcy, i.e. a new sovereign government will be elected and sovereignty will weave itself into the country’s political fabric once again. For Martel, there is a certain inevitability, even inescapability about sovereignty, indeed, for him “there is no place in the world that is innocent” (Ibid.) of it. While the term can vary in meaning, it shares common features: “a sense of command and authority, a concentration of decision-making, a sense of delineation and boundaries that exclude as much as they include” (3). In acknowledging these characteristics, the author nonetheless offers his own provisional definition of sovereignty: “it is a system of authority that usurps power from the very people in whose name it fomented” (2). Martel makes these claims early-on, without qualifying them in relation to specific political bodies. It seems that his lack of specificity on this comes about because he seeks to focus on something preceding the deployment, or lack thereof, of sovereignty in political contexts. Instead, that sovereignty exists as a mode of representation is what interests the author because he believes that “in its contemporary practice [it] is always idolatrous, that is to say it is a form of representation that interferes with rather than facilitates or expresses popular power” (Ibid.). Martel is not calling for an overturning of representative politics, to do so, he claims, would be to chase a “bogus truth” (3). In opposition to this, he calls for an approach to sovereignty that recognises it as something created. In doing so, he seeks also to challenge sovereignty by refusing to imbue it with idealized, unrealizable truth claims characteristic of idolatrous practices. This is indeed a difficult task because from its initial inception in its relation to an omniscient and omnipresent God, and later, its reincarnation as the all powerful state, sovereignty has always been linked with idolatry (20).

Martel encounters a number of interlocutors in this text. In his discussions on sovereignty, and more specifically, on the inevitably of sovereignty in any form of representative politics, we are treated to detailed engagements with political commentators on both the right and left such as Hannah Arendt, Jacques Derrida and Carl Schmitt. Each afford the author a point of contact with his theme and, indeed, they all add to the development of the overall argument. What unites this group as well as the many other figures that Martel discusses – Alain Badiou, Giorgio Agamben, Jean-Luc Nancy, Antonio Negri, Michael Hardt and Etienne Balibar, to name a few more – is that they all fall into the trap of acquiescing to a politics that inevitably results in a form of idolatrous representation. Each, in their own way, and regardless of their criticisms of it, are “haunted” (25-9) by the idea that sovereignty is necessary in politics. This, the author believes, is simply because they all hold the conviction that “there is no viable alternative” (7), which he claims is itself an idolatrous belief.

Martel also recognises the inevitability of sovereignty, yet, he sees it more as an empty vessel as opposed to something that possesses necessary content (142). This, the author finds reinforced in the writings of Walter Benjamin, who, in his own work, recognises idolatry in every instance where something is imbued with – to use a Derridian term – “presence,” i.e. something that is believed to contain a self-same and irrefutable truthful authority. For Benjamin, “the world is beset by widespread and near totalizing practices of idolatry, what he often calls ‘phantasmagoria’” (45), which, in its essence is a form of fetishisation. As Martel points out, Benjamin’s understanding of fetishism differs from the Marxist understanding of it whereby “reality is occluded by its own representation” (11). Benjaminian fetishism does not obscure knowable reality because reality is never knowable in any kind of essence but appears instead only as a process. Benjamin understands this process in terms of decay and destruction, as “a storm that blows out of paradise and fills the world with ruin” (147). In light of this, fetishism, for Benjamin, “is the denial of that ruin” (11), it is a belief and acquiescence of an idea of history, politics and sovereignty that follows an ordered and positively discernible path. Martel’s response hinges on the recognition – as is also pointed out by Benjamin – that fetishism and phantasmagoria are rooted in concepts of sovereignty.

Benjamin’s political thinking is deeply influenced by his relationship to Jewish Messianic eschatology. However, as Martel notes: “He is Jewish and Messianic, but not in a way that any conventional Jewish scholar would recognize. Similarly, he is a Marxist in a way that most Marxists would not accept or welcome” (47). In order to distinguish between the fetishistic approach to idolatrous politics and its antithesis, Benjamin, in his essay “Critique of Violence” (1921), makes the distinction between mythical and divine violence. The former, as Martel claims, “is a projection of fantasy by human beings,” and the latter “undermines that fantasy” (51), the first is law making, the second, law destroying. Using the story of Korah’s revolt from the Torah, Benjamin exemplifies how divine violence – a perfect example of anti-fetishism, when deployed in the task of disrupting mythic and idolatrous sovereignty – can be understood. Martel points out, as does Benjamin, that “Korah was an idolater who rebelled against Moses’ authority. God had the ground open up and swallow Korah and his followers, leaving no trace of them behind” (52). This tale seeks to exemplify Benjamin’s understanding that earthly truth is never what it claims to be and, with the interjection of a Messiah, or Messianic thought in relation to idolatry, we can think the possibility of an alternative to political fetishism. This thinking “allows us to begin again, to re-see and re-read the world around us without the certainty of the sin of idolatry” (Ibid.). Here, neither Benjamin or Martel are not calling for a return to religious practices, but instead, they suggest that we furnish our political thinking with an urgency and interruptibility that is exemplified by this particular instance of Messianic interjection in the Torah. Divine violence as enacted by the Messiah is “bloodless” (Ibid.), it is an act of wiping away or swallowing-up that makes possible a site where things can start over. It is paradigmatic of the revolutionary potential of political interjection that seeks to reveal sovereignty as the idolatrous agency that it is. In its wake, “We are given a space that is not already determined by our own mythical projections” (Ibid.).

Using Benjamin, Martel tries to imagine representative politics that does not take itself too seriously but instead recognises its own fictionality. To do so, he believes, will furnish a space where “the drama of the democratic – I would say anarchic – politics becomes enacted” (3, 143). For the author, Benjamin’s Messianic thinking “shows how sovereignty can be de-centred without undoing the ‘positive functions’ (i.e. without undoing the communities whose very existence is based on its collective relationship to sovereign signs of authority)” (8). The anarchist politics Martel calls for is not “the wild, dog-eating ‘Lord of the Flies style anti politics’” (133) that is often conjured by liberal-capitalism in order to protect its own interests. Instead, the anarchic politics suggested is “the anarchism of everyday life” (133). Here politics leaves behind its idolatrous shell in order to “become something that could be practiced more openly, more legibly to communities that engage in it” (134). The author’s argument is quite simple: keep sovereignty and representative politics, both are needed, however, empty both of any claims they have to authority and promise. Neither can lay claims to irrefutable truths because at their core, both are creations, indeed supreme-fictions, empowered by a source (the people) that precedes them. In recognizing this, the space present within this newly recognized sovereign void furnishes the possibility of an anarchic, constantly de-politicizing practice of politics. Communities are engaged at ground level, dealing with local concerns and engaging the masses in determining their own realities, instead of falling victim to the idolatry inherent in and exemplary of the high-altitude thinking traditionally embodied in sovereign politics. For Martel, a rethinking of sovereignty could very well result in an alternative political outcome, and he seeks to exemplify this through an interesting analysis of Thomas Hobbes’ and Baruch Spinoza’s writings on “the Hebrew Republic” (115-30). In their respective analyses of Israel as the chosen “Kingdom of God,” Martel marks the practice of a constantly de-politicizing form of representative government where the divine violence promised by repeated Messianic intervention is enacted wherever idolatry seeks to situate itself. There are, as Martel suggests, a number of reason why this political order eventually failed, however, for the author, that it materialized itself is what matters. Closer to modern-day politics, however, Martel sees that states like Egypt and Libya in their revolutionary activities enact the very anarchism he is imagining whereby “citizen committees” (135) determine their own outcome in relation to the sovereign politics in its representativeness. These committees exemplify the law destroying divine violence that Benjamin speaks of, and in doing so, they necessitate the disenfranchisement of idolatrous sovereignty, subsequently clearing the space for the practice of a more inclusive alternative.