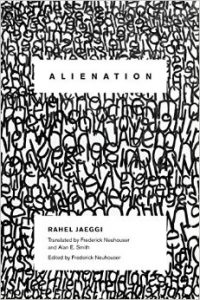 Jaeggi’s book on alienation starts with an Introduction by one of today’s leading representatives of critical theory, Axel Honneth, who states ‘no concept has been more powerful in defining the character of early critical theory than that of alienation’ (vii). In the spirit of critical theory this immediately raises an important question. Why is it then that the early critical theorists – Carl Grünberg, Leo Löwenthal, Franz Neumann, Otto Kirchheimer, Friedrich Pollock, Herbert Marcuse, Theodor Adorno, Max Horkheimer, Walter Benjamin, and Erich Fromm – never published a substantial book or article on alienation? Why does, for example, Macey’s Dictionary of Critical Theory (2000) list no “character-defining” publication on alienation; and why does one of key historians of the Frankfurt School, Martin Jay (1976) not even index “alienation” when alienation is the “defining character of early critical theory”? While alienation may not quite be that defining for critical theory, it, nonetheless, remains a distinctive theme of Hegel and Marx. But in recent years alienation has somewhat ‘disappeared from philosophy’s lexicon [hence] the book [by Jaeggi] can be understood as a philosophical defence of the legitimacy of the category of alienation’ (Honneth, vii-viii) – a theme repeated by Neuhouser’s Translator’s Introduction (xi).

To achieve the goal of re-establishing alienation as a philosophical theme, Jaeggi develops a three part argument detailed in “the relation of relationlessness”, “living one’s life as an alien life” and “alienation as disturbed appropriation”. Jaeggi’s ‘revised version’ of her dissertation (xxiv) finishes with an overly short four-page conclusion. In all this, ‘Jaeggi proceeds from the negative phenomenon (alienation) to reconstruct the positive vision of successfully realised subjectivity that implicitly underlies the diagnosis of those examples as instances of subjectivity gone awry’ (Neuhouser, xiv). As a precursor to the book, Neuhouser (xv) also notes ‘the book’s original title (omitted in the translation) – A Contemporary Problem of Social Philosophy – led its readers to expect a work that investigates the social causes of alienation rather than what one in fact finds: a philosophical account of, broadly speaking, an ethical phenomenon, together with an underlying “theory of the self” (or theory of human subjectivity)’. For an investigation on “the social causes of alienation” perhaps classics such as Blauner (1964), Israel (1971), and Ollman (1971) and more recent works such as Padgett (2007), Sayers (2011), Bhaskar (2012), Braun & Langman (2012) and perhaps even Klikauer (2013a), might be somewhat more helpful than Jaeggi’s book.

Despite this, Jaeggi’s “preface and acknowledgements” starts with ‘yet another book on alienation?’ (xiv), but also emphasises that ‘my aim, then, is neither to update the problem of alienation … nor to discuss alienation in a way that remains within the confines of an already defined theoretical framework. What I want to attempt, rather, is a conceptual analysis of the fundamental concepts’ (xx). According to Jaeggi (xxii), the established theoretical frameworks on alienation can be categorised as:

a) alienation as an ethical problem;

b) as a social philosophy (ever since Rousseau), and

One is tempted to see Jaeggi’s book as a mixture of the first and second category particularly when the author notes that ‘Rousseau’s work contains all the key ideas … of alienation’ (6). In short, it is not a sociological text. Predominantly, it seems to be a study of questions about social – and individual – behaviour and interpretations in terms of ethical values and, despite the initially mentioning of Rousseau, it is by no means a study on the moral philosophy of Rousseau.

With that in mind, Part One of the book begins with a somewhat Hegelian notion outlined as ‘in order to make the concept of alienation fruitful once again, we must give a formal account of it’ (1). For this one of the key definitions of alienation is that ‘an alienated work presents itself to individuals as insignificant and meaningless, as rigidified or impoverished, as a world that is not one’s own, which is today, a world in which one is not “at home” and over which one can have no influence’ (1). To illustrate this, Jaeggi relies mostly on two prime examples, of a young mathematics lecturer and a feminist called “H”. Their alienated lives can indeed be seen as ‘deficiencies’ in social life (Sittlichkeit) as Hegel would have said (8). Rather than on Hegel who wrote on alienation, the book relies on Heidegger who did not specifically write on alienation. Perhaps Heidegger’s anti-modernity had something to do with his living in a mountain hut with no running water from where he glorified peasant life. Heidegger also glorified Hitler to become the “leader of the leader”. He wanted to lead Adolf Hitler. Apart from his Nazi Party membership, Heidegger made only a rather unconvincing contribution to the theory of alienation framed as “being-in-the-world” (11)

More fruitful and more substantial – and more recognised – are Hegel’s and Marx’s contributions to the concept of alienation. But Jaeggi’s illustration on Marx runs immediately into problems when her ‘alienation from something the self has made’ (12) is somewhat contradicted by something the self hasn’t made but is forced onto the self. Jaeggi herself notes: ‘in her labour, the alienated worker is not the master of what she does. Standing under foreign command’ and ‘being powerless, the worker can neither comprehend nor control the process as a whole of which she is part but that remains un-transparent to her’ (12; cf. Klikauer 2013b). Unfortunately, the book is rather short on real examples from real working life. Perhaps it is the book’s lack of investigating the labour process (Braverman 1974) that leads to her typology of alienation. Instead of the rather well-known two types of alienation (Sayers 2012) or four types of alienation (Padgett 2007,Klikauer 2013a), Jaeggi sees three – rather non-Marxist – types when compared to Padgett and Klikauer. These are a loss of alienation and powerlessness; relation of domination; and disconnectedness (22).

Overall however, the book’s ‘thesis is that alienation can be understood as a particular form of the loss of freedom, as an obstruction of what could be called, following Isaiah Berlin, positive freedom’ (35). Perhaps the central key to understand Jaeggi’s work on alienation is the concept of “appropriation”. ‘The concept of appropriation’, she says, `refers to a way of establishing relations to oneself and to the world, a way of dealing with oneself and the world and of having oneself and the world at one’s command’ (36). When this process is disrupted, so Jaeggi argues, an alienated personality is the consequence because ‘being accessible rather than alien to oneself or being able to understand oneself as the author of one’s own action presupposes certain features of personhood’ (49).

From that follows the ‘claim that we can become alien to ourselves, or our lives alien to us, when processes that take on a dynamic of their own or condition of rigidification hinder us in understanding ourselves as agents in what we do (as the “subjects” of our actions and our lives)’ (51). Following the overall concept of appropriation, Jaeggi notes that ‘what is alienating … is not roles per se but the impossibility of adequately articulating oneself in them’ (68). In other words, successful non-alienation demands for Jaeggi the successful appropriation of roles. While Jaeggi might be correct on “social” roles inside a given society, perhaps an examination of managerially pre-designed roles inside managerial regimes (Klikauer 2008) as governed by Managerialism would have led to different conclusions on the character of roles in corporate “capitalism” – a word that almost never appears in her book. Under the conditions of corporate capitalism, many workers experience themselves not as ‘the role player’ (69) but as being played by management (Klikauer 2008: 57; cf. Schrijvers 2004). Theoretically, Baudrillard’s “Simulacra and Simulation” (1994) might have assisted such a recognition.

What perhaps also doesn’t assist the awareness of the meaning of alienation as experienced by many during the “9-to-5 day” working week for almost 40 year is an all too frequently wheeled out “giggling feminist’ (100ff.) with ‘her desires’ (106) of “feminism-vs.-pining-for-a-man” that seemingly determines ‘H’s case’ (117), the bohemian city dweller (157), the ‘caring housewife dishing out spaghetti’ (166), ‘betraying either daughter or fatherland’ (175), ‘plastic surgery’ (187) and the initially mentioned math lecturer moving to the suburbs and stumbling into his new life (201). While these might all be true cases – especially the desire-struggling feminist “H”, they still carry strong connotations to what some might see as somewhat privileged middle-class perceptions of alienation.

What they do not show is the alienation experienced by a vast majority confined to a working existence – not necessarily “life”!– in extremely alienating work situations (Fleming & Sturdy 2009; Samuel 2010). There are conditions, of course, ‘of the factory-like nature of contemporary academia’ (132) but why use cases from factory-“like” conditions instead of using real factory conditions where many of our clothes and our cars (to name just two) are made.

Despite somewhat of a privileged-middle-class outlook, the book’s strength definitely rests on the concept of appropriation as related to alienation. On this, Jaeggi notes that ‘alienation is a deficient relation to world … a disturbed relation of appropriation’ (151). What is perhaps the key chapter of the book – Alienation as a disturbed appropriation of self and world – outlines this in detail. On the positive side of successful appropriation, Jaeggi argues that ‘one is not alienated when one is present in one’s action, steers one’s life instead of being driven by it, independently appropriates social roles, is able to identify with one’s desires, and is involved in the world – in short, when once can appropriate one’s life (as one’s own) and is accessible to oneself in what one does’ (155). Hence, for Jaeggi, ‘leading one’s life as one’s own in a robust sense presupposes various conditions, and it is precisely these conditions that the concept of alienation addresses’ (199). Perhaps the closing statement of the book might well be ‘alienation hinders a life of freedom’ (199). Hegel and Marx might thoroughly agree with that.