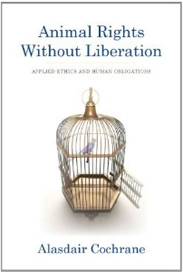 Animal Rights Without Liberation is a brilliant book written by the political theorist Alasdair Cochrane. This book that is strongly based on his PhD thesis offers an innovative normative account on animal rights that suggests strong reforms on the ways animals are used, despite the fact that it gives moral justification for some kinds of use. Broadly speaking, there are three important ideas offered in this book: the basis for animal rights; what the rights of animals are and what these two mean in practice for the treatment of animals.

Regarding the basis for animal rights, Cochrane relies on the philosophy of Joel Feiberg and Joseph Raz contending that strong interests are the basis of rights. Cochrane defines an interest as an essential aspect for an individuals’ well-being. In practice, this means that someone has a right if and only if there is an aspect of one’s well-being (their interest) that is a sufficient reason for holding some other person(s) to be under a duty. According to this definition, there are three important aspects of a right. Firstly, interests are components of an individual’s well-being, for example, if x is an interest of John, then x will make John’s life better, while the frustration of x will make John’s life worse. Secondly, when an individual has a strong interest this usually entails a right. For instance, individuals usually have a strong interest in not being killed; so it can be affirmed that individuals have the right to life. Thirdly, when this interest is sufficiently strong others hold the duty to protect it. Thus, because the interest in life is so strong, others have a duty to protect this interest. According to Cochrane, each individuals’ interests are the result of the level of sentience and psychological continuity that individuals have.

Cochrane dedicates chapters 1 and 2 to outlining the theory just explained. The remaining chapters are dedicated to examining at greater length, animal use in research, agriculture, genetic engineering, entertainment, the environment and cultural practices. These chapters suggest major reforms in the treatment of animals. In fact, Cochrane explicitly affirms that the vast majority of animal use would have to stop, if these rights were established as legal rights. The general argument is that these forms of animal use would still be allowed unless they violate the strong interests of the animals aforementioned. Hence, there is no problem, for instance, in using animals for research if this use does not cause them gross suffering and death. From all these forms of use the one that seems to be more curtailed, according to Cochrane, is the use for cultural practices, because they often cause gross suffering and death, or the interest of humans in the cultural practice poses a strong morally unjustifiable burden on animals.

Animal Rights Without Liberation is an innovative book that offers a new theory of animal rights. It offers a perspective on animal rights that is quite different from what has been offered by other animal rights theorists such as Peter Singer, Gary Francione, David DeGrazia and Tom Reagan. The two innovative aspects of his philosophy are his groundwork for rights and his claim that there is no intrinsic interest in liberty for most animals.

His argument that most animals do not have an interest in liberty may be refutable by new empirical evidence. Some empirical evidence on animal science suggests that many animals, such as dogs, have moral behaviour and guide many of their actions according to this. By being moral agents, they are obviously self-conscious and are, to a smaller degree than humans, capable of revising and devising conceptions of the good life. Thus, liberty itself may be on their radar of interests.

Secondly, even if we accept that animals do not have an intrinsic interest in liberty, there are important elements in the argument that may be used as grounds to prohibit animal use. In particular, allowing the use of animals gives power to humans to decide what to do with animals and what the humane treatment is. This gives enormous power to humans to impose anthropocentric and anthropomorphic standards of treatment on animals and, therefore, leaving animals vulnerable to exploitation.

A third problematic aspect of Cochrane’s approach is that he seems to classify minority practices as ‘cultural’ whereas majority Western practices are seen as ‘non-cultural’. Consequently, he names the chapters that refer to the practical application of his theory ‘Animal Experimentation’, ‘Animal Agriculture’, ‘Animals and Genetic Engineering’, ‘Animals and Entertainment’, Animals and the Environment’ and ‘Animals and Cultural Practices’. This divide between cultural and non-cultural practices is perhaps not the best way to classify different kinds of animal use because other practices are also cultural in the sense that the value they are given is the product of how Western culture looks at research. By way of illustration, the value put on scientific research is the result of research being strongly praised in Western culture, i.e., it is part of Western culture to value research discovery, since the Enlightenment. This division between cultural and non-cultural has at least two problems. Firstly, it leads him to dismiss minority practices as less important for humans than majority practices because the burdens posed on members of minority cultures are less strong than the ones posed on limiting, for example, research on animals. Secondly, this divide leads Cochrane to inappropriately contend that defences of cultural practices have grounds on relativism. He suggests that those who make a claim for the value of culture to humans be balanced with animal rights are most of the time affirming that ethical standards are culturally subjective. In fact, he seems to attribute this kind of relativism to philosophers like Kukathas. Although some philosophers have argued for multiculturalism from a relativistic point of view, most philosophers dismiss relativism as a coherent approach to multiculturalism. Cultures are, for many, an important aspect of well-being and in some cases, even a matter of survival. For example, the burden put on Indigenous people for not hunting and fishing would substantially change their way of life not just because it is one of the most important aspects of their culture, but also because some evidence suggests that Indigenous people need an omnivorous diet to survive. Although Cochrane mentions the case of Indigenous peoples, he does not explore it in detail and, thereby, leaving aside an important counterexample to his idea that culture is not a sufficiently strong motive for imposing suffering and death on animals.

To sum up, in Animal Rights Without Liberation, Cochrane offers an ingenious book which brings new ideas to the debate on animal rights. This book is undoubtedly a contribution to knowledge to the extent that it conceptualises and justifies the rights of animals in ways that have not been previously done. Perhaps the most important claim made in this book is also the most controversial one; namely, that most animals have no intrinsic interest in liberty and, thereby, no right to liberty. Despite these important contributions, there are three main problems with this theory. The first is that the idea that most animals do not have an intrinsic interest in liberty can be refuted by empirical evidence in animal science that suggests that animals have moral behaviour. The second problematic aspect is that Cochrane is willing to allow too much animal use which empowers humans too much in deciding what to do to animals. The third is that his incorrect divide between cultural and non-cultural practices leads him to unfairly rank the interests of Western cultures in the use of animals as higher than the interests of other cultures. I strongly recommend this book to all academics and the general public interest in applied ethics, political theory and animal rights.