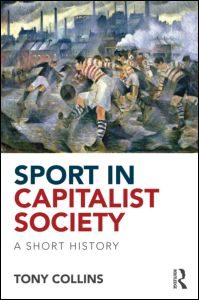 The title of Tony Collins’s book is a partial misrepresentation. It is indeed a (reasonably) short history of sport in capitalist society, but its 129 pages of text offer far more than ‘short history’ might suggest. Collins draws upon a wide range of political, cultural, economic and philosophical works (as well as more narrowly sports-related material) to produce a work of immense scholarship and as encyclopaedic a treatment of the subject as could be reasonably expected.

Collins notes that ‘eleven of the twenty most watched American network television shows in the twentieth century were sports programmes’, while in Germany ‘nine of the top ten most viewed programmes were soccer matches’ (119). It is not surprising, therefore, that Rupert Murdoch argued in 1996 that he would ‘use sports as a battering ram’ in his strategy to expand his pay television empire (119). The audience figures for recent sporting mega-events like the 2014 World Cup in Brazil and the 2012 London Olympics underline sport’s continuing significance in contemporary global capitalism. Sport, its economy, organisation and mass appeal, therefore, demand the Left’s attention and part of the importance of Collins’s book is that it provides a critical Marxist engagement with an area in which such an approach has often been drowned out in a cacophony of rather less critical voices.

Collins convincingly demonstrates that the mediatisation and commodification of sport are not recent phenomena that represent the loss of otherwise more noble pursuits to big capital. The recent intensified commercialisation of, for example, English premiership football may have particular late twentieth-century aspects, but its distinctiveness, as compared to seventeenth-century practices, is largely formal. For, over more than three centuries sport has developed as a product of capitalism, related to and an aspect of capitalism’s wider social, economic and political relations. One of the strengths of Collins’s work is that these wider relations are analysed with an historian’s sense of time and place: not as an abstract constraint or context, but as a living and changing reality.

As the new capitalist social relations spread across Europe, and then more globally, so the games and pastimes that had been diversions from life in earlier times were transformed. Social life became increasingly regimented; social time and social space became increasingly constrained, parcellised and organised; the lives of the poor and of the working class in particular became more disciplined, watched and timed. While there was no spontaneous and smooth transition between the two, under pressure from ideologues who ‘sought to create a new moral framework suited to the needs of an urban industrial capitalist economy’ (19), pastimes were transformed into what we would now recognise as sports. The codified and time-limited sports that developed (the most globally successful of which is football) were especially suited to capitalism’s patterns and requirements and, rather than being distractions, expressed everyday life under capitalism: ruthlessly competitive and geared towards generating a profit, whether for sporting capitalists, gamblers or media interests. For today’s professionals these are alienating jobs, more liable to produce long-term disfigurement of the body than the smiles and laughter associated with play.

Capitalism’s core relations of exploitation and competition provide a thread around which Collins’s book coheres, but the chapters bear witness to Marxism’s understanding of capitalism as a differentiated totality: carefully interwoven with the broader patterns of capitalism’s unfolding global relations, the chapters explore almost every imaginable aspect of sport (obvious or otherwise) in their connection to the wider whole. Early chapters deal with the rise of modern sport, and the corresponding decline of traditional games, and the subordination of sport to the inter-state framework of the emergent capitalist world order. The national-international dialectic is further developed in later chapters dealing with sport and imperialism and globalisation. Other chapters focus on important specifics of sport’s evolution, including: the ideology and practices of amateurism (‘sentimental cant’ (64) that combined attachments to capitalist competition and a hierarchical, ordered social structure, with middle class status guaranteed and preserved (31)); gender and racist oppression and exclusion (which Collins firmly links to capitalism); drug-use; sport and the mass media; sport in the Cold War; sport in the radical 1960s; and revolutionary alternatives to nationalism and militarism in sport. In each of these areas Collins unearths fascinating material and offers stimulating insights.

Collins’s critique rightly emphasises the ways in which capitalism structures and shapes sport, and in which its ideologues construct sport around an ahistorical conception of (acquisitive and competitive) human nature. As a consequence, sports-people (whether practitioners or administrators) have rarely adopted a critical stance in relation to imperialism, racism, sexism, or any of capitalism’s many pathologies. Furthermore, Collins argues, when opposition to imperialism did emerge in sport in the declining British Empire in the post war era, ‘in this, as in everything else, sport followed politics’ (66). In a similar vein, the famous black power salute of Tommie Smith and John Carlos at the 1968 Mexico Olympics was made possible by the extra-sports struggle of the US civil rights movement. All of this provides a powerful antidote to the exaggeration of sport’s transformative potential among more mainstream writers, but in producing this corrective Collins presents a slight one-sidedness of his own.

If Marxism is to capture sport in all its complexity and contradictoriness, it needs to take a small step further than Collins does. This need not entail disagreement with Collins’s argument that sport is ‘neither an escape from nor immune to the political realities of life’ (68), but it does mean emphasising the contradictory nature of the realities of life under capitalism, and how this finds expression in sport (albeit a mediated and often distorted expression). Social and political struggles may have extra-sporting origins, but their echo in sport may help to intensify them and thereby their impact on politics and social relations. Collins goes some way to recognising this when referring to Muhammad Ali’s principled stance over Vietnam and, elsewhere, when he writes that ‘sport not only reflected the times, it also played an active role in changing the political climate’ (124). But, here he is referring to how the 1984 Los Angeles Olympics dovetailed with the politics of the ascendant New Right and ‘created the authoritarian template for subsequent “mega-sporting events”’ (124). Can sport ever transcend its ‘essential conservatism’ (128) and become articulated, even partially, with a more radical politics?

Not easily, certainly, for it is hard to disagree with Collins’s argument that ‘the global mega-sports event has come to be a passion play of celebration of and deference before the world capitalist order’ (125). Yet, Collins hints at an alternative and more nuanced view of sport when he registers that it is not identical to all other capitalist pursuits: it has a powerful emotional appeal, for instance, and spectators are not passive but can ‘participate in the events they witness’ (127). This may, of course, reinforce capitalist pathologies such as nationalism and xenophobia, but presenting the future of the Olympic Games as merely ‘war minus the shooting’ (128) fails to engage with the more positive emotions that sport can help arouse. The London 2012 games were not an example of pure proletarian internationalism, but few who witnessed them could fail to appreciate that London could be a different place, a place of conversation and conviviality and of solidaristic celebration of achievement. From a Marxist perspective this was not perfect, and the games remained framed by capitalist competition and nationalism, but they occasionally revealed a certain fragility of those framings and a space opened in which more critical voices could be heard.

Most of what Collins writes deepens the Marxist understanding of sport. Perhaps in a short history of this sort it is too much to expect a more comprehensive treatment, but a Marxist engagement with sport should give proper weight to its contradictory nature and recognise that its capacity to enthral and enthuse may not be entirely to the advantage of the world’s ruling classes. Collins is correct to suggest that there are distinct limits to what can be reclaimed via struggle through sport and that the wider context of struggle is more decisive. But, if sport under capitalism is ‘capitalism at play’ (13), a more dialectical appreciation of capitalism (and of the contradictory relationship between sport and play) would further elevate an already excellent book.