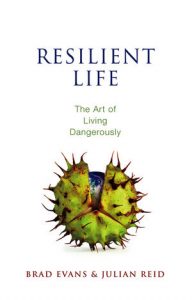 Resilient Life by Brad Evans and Julian Reid provides an important analysis of ‘the changing cartography of liberal power’ (41). If liberalism was traditionally premised upon the promise of security, neoliberalism seems to have disavowed the ideal of security and embraced endangerment as a necessary condition for life to flourish. While both are premised upon a concept of life as vulnerable, neoliberal biopolitics maintains vulnerability must be accepted, not avoided. It replaces ‘the dream of lasting security’ with ‘a catastrophic imaginary that promotes insecurity by design’ (1). As dangers multiply, and as ‘we become increasingly attuned to living in complex and dynamic systems which offer no prospect of control’ (3), resilience becomes a goal and an obligation. Resilience is understood as being adaptable, as an ability to absorb threats. This ideal of resilience, Evans and Reid argue, is debilitating for political subjectivity. The book offers a fascinating genealogy and critique of the discourses of vulnerability and resilience that underlie neoliberal biopolitics, while also aiming to provide a vision of political subjectivity that would be ‘capable of outliving, meaningfully, the neoliberal subject’ (202).

Chapters 1 and 2 provide an account of the way ecology and the natural sciences intersect with the neoliberal belief that the world is ‘insecure by design’, that life is vulnerable, and that resilience is an ideal towards which we ought to aspire (61). Molecular biology is exemplary in this regard, as endangerment is considered ‘a condition of possibility rather than an obstacle, for human development’ (61), so that for any ‘living system … their problem is never how to secure themselves … but how to develop the resilience which enables them to absorb the perturbations … in their structure’ (62). Evans and Reid do not directly challenge the truth of this biological account of life, but ask what results when applied to human populations (62). As the human is reduced to its biological life by neoliberal biopolitics (64-5), and ecological thought encourages human life to be seen as a living system like any other (7), endangerment and vulnerability come to be seen ‘as a condition for partaking in the world’ (79), as necessary for life to ‘grow and prosper’ (72).

The authors discuss the problems with resilience throughout. It is an ‘ideological project’ (32) that involves ‘divesting the human of any belief in its abilities to transcend the mere biological fact of being and achieve security’ (40). It demands subjects ‘forgo the very power of resistance’ (82), and ‘adapt repeatedly to their conditions, in the same manner that living systems, right down to weed species, adapt continually to the changing topographies of the dangers they encounter’ (63). It ‘cheats us of … [the] affirmative task of learning how to die’ (13). It demands, in short, that we change ourselves so that the world can remain the same. It also ‘places the burden of … crises directly onto the shoulders of the globally impoverished’ (47). It targets and ‘renders problematic precisely those populations which are “at risk” in order to permit their veritable containment’, and ‘clouds racial, cultural, and gendered discriminations by the smokescreen of objective risk assessments’ (18).

The imperative to accept vulnerability and become resilient extends broadly. Chapter 4 discusses how the ‘catastrophic imaginary’ normalizes anxiety while demanding subjects adapt to it as part of the learning process (69-104). Also discussed are prominent authors of the left, who are criticized for advocating the liberal imperative to recognize and accept vulnerability and precariousness as a precondition for life (104-7). Again Reid and Evans do not directly question the truth of ‘ontological vulnerability’, they question the political effects of the imperative to accept this truth (106-7). While the reader may occasionally wish they would directly engage the truth of such concepts, it doesn’t diminish the force of their critique of resilience. Additionally, the strength of the authors’ critique is that it is not difficult to detect these imperatives in a variety of discourses beyond those discussed in the book itself.

The critique of resilience culminates in Chapter 6 with a discussion of climate change. Scientific studies tell us that having already crossed multiple planetary thresholds, ‘global ecological catastrophe of epic proportions’ is inevitable (142). The impending catastrophe is due to our failure to recognize ‘the finite nature of the resources which our civilization has depended on for its exploitation and growth’ (147), so we are encouraged ‘to recognize our responsibilities as the species that has caused this catastrophe, and … change our mode of being in order to have any chance at all of surviving’ (148), as ‘there might … be a window of opportunity for us to change our ways by submitting ourselves finally to such a truth’ (147). Evans and Reid argue this discourse exemplifies ‘prophetic’ and ‘parrhesiastic’ modes of truth-telling. Prophecy reveals the truth of some future event, while parrhesia reveals a truth about who we are in the present, in order for us to change (144-7). But unlike similar discourses in the middle ages, where security and salvation were incentives to change, contemporary climate science ‘promise[s], at most … that the human … may go on living, a little longer’ (151). The authors challenge ‘the worth of our changing our ways’ by becoming resilient in line with the very neoliberal practices responsible for environmental devastation, and question ‘the utility of this parrhesia’ that demands we confront and accept our finitude if the catastrophe is inevitable (150). Again, their aim is not intended to directly challenge the truth of climate science (143-4). Rather, they are concerned with ‘what follows should we accept the veracity of these claims’ and with ‘the effects of its truth, and questioning how we respond to that truth’ (144).

If the truth told by climate science is ‘that the human must change itself in order to save itself and its world’ (164), the alternative for Evans and Reid seems to be that we change ourselves in order to change the world. They suggest these modes of truth telling ought ‘to be put to different uses … the dictum of which is that in seeing the end we do not fear it, that we live out the end in full knowledge of it, while we renounce any call to organize with a view to trying to survive the end’ (166). This ‘requires a new regime of truth … through which to articulate the possibility of the coming catastrophe while being able to welcome this event as the process of passage to a new world and life beyond that which we have known up until now’ (165-6). In contrast to the ‘resilient subject’ of neoliberalism they propose the ‘poetic subject’ (136). Unlike the resilient subject, it would be affirmative and have ‘confidence’, it would not fear transformation. The concluding chapter expands on this vision through discussion of aesthetic productions that exemplify these features (176-190).

While the critique of resilience is persuasive and worthy of a wide readership, their alternative to the ‘resilient subject’ raises a number of questions. The authors acknowledge it ‘will require more considered attention in a separate project’ (136), so perhaps these questions will receive attention there.

First, the ‘poetic subject’ is an alternative to the ‘resilient subject’ in that it involves changing our attitudes toward the truth of catastrophe, instilling confidence, confronting truth with courage and without fear. This is surely better than the imperative to change oneself in order to preserve neoliberalism. But is it not possible to change oneself by changing the world? In other words, could the confidence denied the resilient subject be instilled through the process of transformation itself?

Second, the ‘poetic subject’ welcomes the coming catastrophe ‘as the process of passage to a new world’ (163). If this means that our attitude ought to be one that welcomes catastrophe as an ‘opportunity’, then how is this distinguished from the ‘catastrophic imaginary’ of neoliberal biopolitics, where ‘[d]isasters … are not threats to the development of human beings from which they might aspire to secure themselves’ but ‘events of profound “opportunity” for societies to transform themselves economically and politically’ (80). Surely they differ in what follows, but is that the only difference?

Finally, the ‘poetic subject’ would not seem to accept its vulnerability. And yet such a subject would seem to appreciate that ‘political truths are told by subjects that risk life, their own, that of others, and the world itself, in telling truths which they do’ (198). An alternative to the nihilism of the resilient subject, they say, ‘demands a veritable courage to truth that weathers the storm in order to emerge transformed’ (153). These passages, while infrequent, seem to indicate an acceptance of vulnerability. Granted, it would be an affirmative vulnerability without fear; but is this possible within their critique?