Marx & Philosophy Review of BooksReviews‘Signs and Machines: Capitalism and the Production of Subjectivity’ reviewed by Michael Maidan 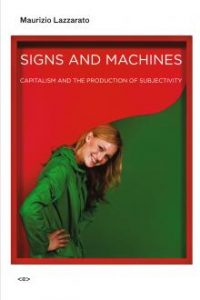 Maurizio Lazzarato
Signs and Machines: Capitalism and the Production of Subjectivity

Maurizio Lazzarato is best known for his essay “Immaterial Labor and Subjectivity” (1991) and for his more recent The Making of the Indebted Man: An Essay on the Neoliberal Condition (2012, reviewed 2013). As in his prior works, Lazzarato sets up to study the changes in the relationship between subjectivity and what is known in the Marxist tradition as the “mode of production”. He also wants to criticize other similarly oriented attempts that fall short, in his view, of the main features of these changes. This general orientation is colored by the insight that the relationship between production and subjectivity that he had diagnosed earlier has become dysfunctional to the extent that “today the weakness of capitalism lies in the production of subjectivity” (8).

What explains such a weakness is the dual nature of the production of subjectivity in Capitalism. Following Deleuze and Guattari, Lazzaratto differentiate two dispositifs (apparatuses): “social subjection” and “machinic enslavement”. “Social subjection” is the way in which we are fitted with an identity (sex, body, profession, nationality, etc.). This is what makes us individual subjects. We also experience a process of de-subjectivation—which acts both at the pre-individual and supra-individual levels—that dismantles the individual subject. Lazaratto calls this process “machinic enslavement”, a concept that generally refers to a configuration in which two or more devices are set up in such a way that one has unidirectional control over the others. Lazzarato understands “machinic enslavement” as a relationship in which a subject becomes “the slave” of a machine. He writes: “Capitalism reveals a twofold cynicism: the ‘humanist’ cynicism of assigning us individuality and pre-established roles … in which individuals are necessarily alienated; and the ‘dehumanizing’ cynicism of including us in an assemblage that no longer distinguishes between humans and non-humans, subject or object, or words and things” (13 emphasis added). “Social subjection” and “machinic enslavement” are objective processes, not ideological distortions of reality.

Lazzarato finds in the work of Foucault, Guattari, and in Marxist and Leninist practice, a form of subjectivation that is “irreducible to power and knowledge relations” (14). This is the form of subjectivation that Foucault names “care of the self”, and Guattari names “self-positing and existential affirmation”. These practices have been obscured by the logocentric and linguistic turn operated by analytic philosophy and by contemporary theorists such as Alain Badiou, Judith Butler, Jacques Rancière, Paolo Virno, and Slavoj Zizek. In opposition to their reliance on the structural features of language (langue), Lazzarato champions the “act of enunciation” which he endows with quasi-divine features. Enunciation —not be confused with performative or illocutionary speech acts—“as any other act of creation” emerges as a “power of self-positioning, self-production and a capacity to secrete one’s own referents” (18). Examples of enunciation are the Christic or Leninist “refrain” (ritournelle), which corresponds to a production of subjectivity at the level of the collective (208). The famous “occupy Wall Street” slogan is neither a description nor a performative, but the call to the constitution of a collective subjectivity that, contrary to traditional emancipatory political practice, dispenses with consciousness.

Accordingly, Lazzarato rejects the ascendancy of language, or signifying semiotics. Lazzarato claims that there is a broad range of expressive performances, of which signifying signs are only a subset. Primitive societies, e.g., have different expressive strata that are not hierarchically structured. Speech interacts democratically with these other forms of expression. In more complex ones, speech becomes a form of general equivalent to the multiple semiotics systems (70-1). This becomes more pronounced in capitalist society, were the multiplicity of semiotic systems is subsumed to the logic of capital.

Following Guattari, Lazzarato differentiates between signs that owe their efficiency to their passage through representation and consciousness, which he refers to as “impotentized signs”, and “power signs”, which do not owe their influence to the mediation through representation. When a card is swiped on a payment terminal the process of reading the encoded signs and its effects on reality seem to bypass denotation, representation and signification (85). The notion of an “assignifying semiotics” can be applied, therefore, to the study of machine and machinism. Machines are no longer things, as they were in the past, bur rather semiotic “assemblages”, which may consist of human beings, mechanical or electronic devices, and incorporeal elements. A factory would be an example of such a “machine”. As the devices become more capable of intervening directly into the real, we develop a capability to act directly in interaction with such devices. When driving a car, we do not require the intermediation of a symbolic system.

Chapter three introduces the notion of “mixed semiotics”. According to this, the distinction between signifying and asignifiying semiotics is analytical, while in actual modes of expression we find a combination of both. The objective here is to show, on the one hand, the shift from individuated subject to a subjectivation carried out by capitalist machinism and, on the other, that Guattarian theory is a faithful interpretation of the reality of capitalist machinistic subjectivation. Mixed semiotics allow us to understand phenomena as different as infant subjectivity, the stock market, cinema, the organization of the service sector of labor, etc. Describing the stock market, Lazzarato places at its center the figure of the trader, which has been both lionized and demonized in popular descriptions of contemporary capitalism. Lazzarato observes the many semiotics realities in the trading room, such as economic indicators, data on the current evolution of the market, simulations of different scenarios, etc. The trader “establishes the focal point of proto-enunciation both in the … price differentials of assets and in the productivity differentials of the ‘real’ economy … these differentials represent nodes of proto-subjectivation in which human subjectivity … came to fit and combine with machinic proto-subjectivity” (96-7). The trader is the rallying point at which all the machinic proto-subjectivity (data, scenarios, share prices, etc.) comes together.

The following three chapters are case studies, which apply the notions developed in the precedent chapters to recent social and political struggles. In chapter four Lazzarato refers to the struggle of the “precariously employed French cultural workers” in defense of the rights to full unemployment benefits while between assignments. In chapter five Lazzarato refers to Nicholas Sarkozy’s infamous depiction of the population of Paris suburbs and urban ghettos as “scum” and of his ministerial action as “pressure cleaning”, and reflects on the nature of such political sloganeering. Lazzarato defends an understanding of such language that is at odds with the performative interpretation embraced by Butler and Zizek. Chapter six reflects on the nature of recent political mobilizations in Europe, which Lazzarato interprets as a rejection of the political model of representation, and as experimentation with new forms of organization.

In the concluding sections of the book, Lazzarato returns to some of the issues presented in the first chapters. He insists on the parallelisms between linguistic and political representation (202), and on the need to explore ways in which speech and signs operate in the constitution of the self, bypassing linguistic and political representation. He also elaborates on Guattari’s notion of “existential”, a function of language that constitute the speaker as a subjective entity (205), and which is similar to what Foucault calls “the parrheseistic”. The discursive and the existential respond to two different logics, which are “dissymmetrical functions of subjectivity” (209). Discursive logic operates with a dichotomy between subject and object, I and You. Instead, in existential ensembles we have “threshold-crossings” and “gradients of intensity”. But the non-discursive is not of an irrational or ineffable nature; the non-discursive is neither formless, nor in need of symbolic organization by language. It is also not the product of economic, sexual, linguistic or social infrastructures (210), i.e., it is not of the domain of the ideological or the superstructural. The subjectivation process is an act of self-affection, which repositions and reconfigures the economic, sexual, etc., infrastructures. In these last sections, subjectivation takes on a more positive role. The role of language in subjectivation is presented as a ”cartography for localization and access to processes of subjectivation” (211). Writing about Marx and Freud, Lazzarato explains that their role was not the formulation of a true description of an objectively existing reality, but the action by which “they crystallized, gave consistency and transversality to the emerging, mutant ‘focal points of subjectivation’ of capitalism” (213).

Lazzarato claims that the current crisis consists in the inability of capitalism—but also of the working class—to articulate technical, social, and economic machines or flows with subjectivation process (existential meaning). Such an articulation is not a form of knowledge; this one comes to only afterwards. An artist that does not wait for inspiration to visit—i.e., to have instrumental knowledge of what he wants to achieve—but “must invent tools and procedures of experimentation” (219). If knowledge has a role, it is primarily negative and critical, the task of tearing down what makes obstacle to a politics appropriate to the current crisis. For this we need a new “cartography of the production of subjectivity”, and radical break from analytical philosophy, Lacan, linguistics, and even from a certain type of Marxism (224).

My main concern with Lazzarato’s approach has to do with his account of subjectivity in the times of postmodernity. Does not doing away with the subject in favor of a flow of signs and affects obliterates the subject of resistance? This is an issue that preoccupied the last Foucault and which explains in part his interest in “practices of the self”. Is Lazzarato’s account of the flows of “assignyfing signs”, which he exemplifies with the processing of a credit card in a payment terminal or the flow of information in the trading room, really direct interventions of signs on the real? Would these descriptions make any sense without the notion of a payment system or of a stock market, i.e., without the expectations and habitus of individuals? This is even truer of his description of the stockbroker, who in Lazzarato’s account is the only (minimal) subject involved in a stock market transaction. But this is clearly wrong. Any transaction has nominally two parties, and a whole lot of individuals involved, each one with its own expectations, wishes, and delusions. To what extent is it helpful, from a cognitive and from a practical point of view, to reduce them to mere supports of mechanized flows of information? Is the liquid subject—to borrow Bauman’s apt portrayal of contemporary society—a better foundation for resistance and emancipatory practice than a thick one?