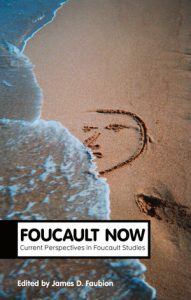 According to James Faubion the editor of Foucault Now, ‘more use can be made of Foucault than has yet been done’ (11). For Faubion, contributors to Foucault Now all develop Foucault’s central message, that being human is to be historically conceived, drawing on the gamut of Foucault’s oeuvre to this end. Intriguingly, Faubion notes that none of the ‘contributors provide any revolutionary response to Lenin’s infamous question’, ‘What Is To Be Done?’ (19). Activist-directed guidance is not on offer. Instead, Faubion contends that ‘in a recognizably Foucauldean spirit’ (19) a number of pertinent answers are to be found in Foucault Now, a range of responses which are organised around familiar concerns to a Foucault studies audience: biopolitics; Foucault’s 1970s lectures; the intercapillary nature of power relations.

The book is divided into two parts: the first being more general than the second.

For example, in Part I, James Laidlaw (23-37) presents a Foucault far more at home with the notion of liberty than might be commonly assumed. For Laidlaw, Foucault’s inclusive understanding of power in his later writings on sexuality and classical antiquity, puts freedom in situ—‘“the purposeful art of a freedom perceived as a power game”’ to quote from History of Sexuality, Volume 2 (35). Rather than a leap from domination to emancipation played out in different times and places, Foucauldean liberation is a relational interplay between active, self-constituting subjects. In the case of the sexual politics of Athenian men and boys, one can see an ethical exercise of freedom, subjects reconstituting themselves within their sexual relations, not the absolute, moralistic ‘pursuit’ (37) of totemic standards.

Also in Part I, Lynne Huffer’s topsy-turvy, paradox rich, borderline unreadable ‘Foucault’s Evil Genius’ (52-70) charts the evil genius of the chapter title, the spirit of unreason that accompanies those historical moments of rationality—the great medicalisations of madness and sexuality—that so fascinated Foucault. Unlike the evil genius in its original guise as the false god of Descartes’s Mediations, the spirit is never completely banished in Foucault’s historical analysis. It is rather ‘the trace of disappearance, the leper’s ghost’ (62), present but never truly here. For Huffer, unreason/madness is more akin to a constant fiction than a temporally excluded other in Foucault, rather absolving him from the charge of neat historicism levelled at him in Derrida’s critique of History of Madness.

As for the ‘substantive detail’ (17) of Part II, Toby Miller (188-202) uses the reality show Undercover Boss and other case studies to explore the naturalisation of neoliberal values. In Miller’s reading, Foucault, like Marx (Miller rejects the perceived contrariety between Foucault and Marx), is acutely aware of how capitalism is not simply a big, bad, interdictory wolf. Like Marxian Ideologiekritik, Foucault is concerned with how groups horizontally replicate the values of a hegemonic social order. For Miller, Undercover Boss takes corporate leaders onto their shop floors, allows them the opportunity to ratify injustices and relate business to the common man, and, with the consent of an individualistic viewing public, promotes managerial, quasi-divine solutions as the humane premise for corrective action. In his conclusion, somewhat more in line with Lenin’s infamous question, Miller demands a political ‘counter-discourse’ unabashed in its opposition to the managerial ‘cloak’ (201-2). In their case study-orientated approach, Laurence McFalls and Mariella Pandolfi (168-87) claim that Foucault’s lectures, The Birth of Biopolitics, and his identification of an ‘ordo-liberalism’ (169) in Germany’s post-war capitalist resurrection, anticipated neoliberalism. In contrast to the classical liberal liturgy, control and social engineering were at the heart of the German project. Liberalism here is not the fostering of the self-centred, socially unencumbered subject; rather, ‘a plethora of technologies’ produce ‘[t]he new and improved homo oeconomicus’ (173). In a brief nod to optimism, McFalls and Pandolfi point to ‘the narrowest of escape routes’ (185) provided by Foucault’s description of contextual parrhesia (frank speaking) in The Government of Self and Others.

In other chapters, Foucault’s canonical standing is discussed. In his reprinted short essay, Ian Hacking (38-51) charts the complicated reception of History of Madness, or Madness and Civilization to give it its first English title, highlighting the ‘gradual disappearing act’ (43) of déraison (unreason) from not only the book’s various French and English titles, but also from the text’s reception. John Forrester (112-28) takes as his starting point Foucault’s aversion to his work being received posthumously. Alongside the fact that Foucault celebrated the death of the author, this makes perfect sense: analytically Foucault wanted nothing to do with those who wrote texts. As Forrester makes clear though, Foucault’s relationship with the authorial figure, in Discipline and Punish and in his 1979 Stanford lecture ‘Omnes et Singulatim: Towards a Critique of Political Reason’, is not a negative one. Foucault was profoundly interested in ‘the question of the origin of the modern individual’ (125). For Foucault, the author is one of many figurations of individuality to be taken seriously.

In his account of Foucault’s compatibility with the artist Gerhard Richter, noted Foucault collaborator Paul Rabinow (203-24) posits a connection between the two over the matter of ‘meletē’ (208-10), an evaluative coming to terms between past and present scenarios, a mediation of sorts present, for instance, in the encounter between traditional philosophical unease towards rushing headlong into something and pressing political circumstances. For Rabinow, Foucault and Richter are not interested in meletē conceived melodramatically, either as a break from the bankrupt past or a headlong embrace of the potential-laden future. In Richter and Foucault, Rabinow finds an awkward, highly self-conscious, Brechtian coming to terms. When it comes to politico-philosophical commitment, both men saw a recurrent re-evaluation of one’s and other parties’ surroundings which forces them ‘to make possible (but not certain) the assemblage of new lines of flight or at least the plausibility and worth of attempting to do so’ (223). For his part, Faubion discusses the poet Constantine Cavafy (225-42) and the idea of aesthetic autopoiesis, the cultivation of a free, active man as a starting point, not a liberated end goal.

Foucault’s more epistemological tangents are covered by Didier Eribon (71-87) and Colin Koopman (88-111). Eribon discusses Foucault and Roland Barthes’ ‘rejection of’ (78) the popular discourse on the liberating effect of sexual self-awareness in favour of something far less essentialist, monotonous and hermeneutical: ‘the historical invention of ourselves’ (86). There are many, notes Eribon, in this tradition: Judith Butler for example. Koopman flags up how Foucault, the critical empiricist, offers the genealogical means to delineate the biopolitical production of man through statistical and demographic practices. Koopman argues for using Foucault strategically, as a means of re-interpreting the past, and against deploying Foucault’s concepts, such as biopolitics, to historically define eras or social phases, highly germane when one consider how much Foucault’s words are deployed as fashionable blanket terms today.

In Eric Fassin’s and Cary Wolfe’s chapters (131-51; 152-67), sexual politics and the process of ‘“animalization”’ (153) are dealt with respectively. Fassin, in the wake of claims that Foucault provides the intellectual ammunition for the pro camp in the gay marriage debate, notes Foucault’s ambivalence about normative arguments. Fassin highlights that Foucault was interested in new relationships, new modes of being. Liberation issues such as migrant rights and racial equality that proceed on the basis of static, foundational notions—the concepts of We and the Other for example—enable the type of relations, the importance of belonging to the We in-crowd, that discriminate from the very off. Wolfe echoes this emphasis on the productive effects of certain dispostifs, highlighting the ways in which basic components of organic life have been objectified. Politics, whether resisting the status quo of factory farming or in Fassin’s case, discrimination, if it is to done seriously, is a question of, to quote Foucault, ‘“new schemas of politicization”’ (166). In other words, taking Foucault’s own analogy, one should define the chessboard not be defined by the chessboard.

For Foucault Now’s editor, what coalesces the contributions to the book is a commitment to ‘Foucault’s project of a historical, critical ontology of ourselves’ (15). Despite the diversity of subjects tackled in the book, and intuitive assumptions about Foucauldean hostility towards the will to systemise, critical ontology, to Faubion at least, is a loose research programme: Foucault provides ‘a systematic procedure for asking questions’ (10). As Faubion contends ‘Foucault was not merely a provisioner of tracks of research, ideas, schemas, stipples and instruments’ (8). In Foucault Now, then, Foucault is made to follow a third way. Neither meta-theorist nor mere pluralist dropper of hints regarding possible avenues of investigation: Foucault’s words, particularly those spoken in his 70s lectures, are an exhortation to do more scrupulous work through and with his concepts.