Marx & Philosophy Review of BooksReviews‘Criticism of Earth: On Marx, Engels and Theology’ reviewed by Daniel Fraser 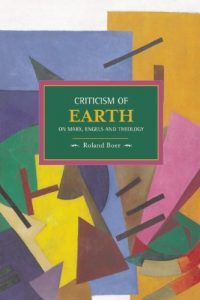 Roland Boer
Criticism of Earth: On Marx, Engels and Theology

”… And I’ve come to think that it is also God’s will that society continue to advance toward something better. I have thought that a man can believe in God and in communism, that it is possible for them to be combined.”

“No,” the directress smiled with maternal authoritativeness, “it isn’t possible for those two things to be combined.” Milan Kundera, Edward and God

Over the course of his mammoth investigation into the links between Christian theology and Marxism, which now stretches to five volumes, Roland Boer delves into the relationship between Christianity and communism. Through a series of case studies of key Marxist thinkers he endeavours to show that these two philosophies have not only been extremely closely intertwined historically but that they remain so to this day. In Criticism of Earth, the fourth volume in this series, Boer turns his attention to the two most central figures of all: Marx and Engels (and, by extension, Hegel, Bauer, Stirner and Feuerbach). In doing so, Boer gives free reign to the very best of his knowledge and talents whilst also exposing the weaknesses of his stylistic approach. Throughout his sustained, anthological analysis of this complex and ever-shifting current of theology one is often left frustrated by the open-ended nature of the enquiry, but in no doubt that the symbiotic relationship of these two philosophies demands attention.

The Introduction, as is consistent with the previous volumes, is clear, direct and concise. Boer’s ability to distil both the points he hopes to make and to express cogently a number of the constituent elements of Marx’s arguments – such as the Feuerbach inversion, and the earliest of Marx’s forays into the concept of fetishism – are exemplary. After this Boer gives a brief outline of the historical period from a theological perspective which aims to paint the period of the nineteenth century, particularly in Germany, as a distinctly ideological battleground. From here the first chapter focuses on the broad category of ‘theological allusions’ in the work of Marx and Engels. It shows how the two authors used the Bible as a weapon which was always ready-to-hand, to attack the ruling classes and the clergy (as well as other philosophical opponents) whilst also using it to make economic points and, especially in the early days, to outwit the ever-present German censors. Even in a work as footnote-heavy as Boer’s, the accumulation of references presented here is astounding and Boer’s powers as an encyclopaedist could not be more apparent. Most interesting is the chapter’s examination of the ambivalence of Marx’s political relation to the Bible, especially Marx’s early unwitting alliance with a radical reading of the Fall which identifies the hero as the serpent (48-9).

Boer then moves on to an examination of the ideological arguments between Bruno Bauer and Marx and this is where the book really begins to pick up. Initially he deals with the simplistic and often touted view that Marxism is secularised eschatology, that it is merely secularised theology (78). He then examines Marx’s attempt to ‘reclaim Epicurus’ as a pre-Christian thinker who possesses the freedom which Bauer argues will be realised from the internal contradictions of Christianity while simultaneously identifying himself with that figure. Boer then looks at Marx’s attempts to show that Bauer’s idea of emancipation would never lead to the full human emancipation he seeks, leading to freedom of religion rather than freedom from religion: a new form of alienation (90). Alongside this commentary also runs a biographical examination of the enduring nature of the friendship between the two men. The chapter has a looseness which characterises Boer’s style. However Boer’s apparent lack of direction can lead to one missing the ability he has to crystallise complex and difficult arguments in summation. His exposition of Marx’s argument that idealism and theology are the same thing could not be more direct or concise: ‘Hegel’s idealism is secularised theology; Bauer seeks to apply Hegel’s idealism to theology.’ (100).

Two more chapters on the Young Hegelians follow. The chapter on Stirner largely focuses on the idea that there is a formal similarity between Hegel, the Bible, Stirner, Marx and Engels in their attempts to find a ‘key to history’, in their rewriting of the events of history as the progression of one distinct concept. This is one of the weaker sections, yet one which, with its digressions into Marx’s argumentative prowess (122) and its overly extended and tangential footnotes as well as its passionate prose, sounds almost autodidactic in its enthusiasm; and it is one which exposes much of the best and worst of Boer’s style. The opening of the chapter represents one of his most common demonstrative processes. He outlines what he claims the following pages are going to argue, subtly shifting definitions and language as he puts forth his notions of where the answers to certain claims might lie. This allows him, as the arguments unfold, to employ his depth scholarship and his unbound enjoyment of his subject, in order to manoeuvre between the delineated arguments and conclusions which are slightly disconnected from his opening statements. As Boer claims of Stirner’s own rough style, ‘messy people are not disorganised, merely have a different way of organising things.’ (111); and Boer’s own ‘messiness’ is one which not only mirrors that of his subjects but is analogous to his own conception of the complex and shifting relationship between Christianity and Marxism. The chapter on Feuerbach is much clearer, focusing on just how far Marx and Engels took Feuerbach’s inversion, and on its existence as a crucible for the development of their thought. It then examines the relationship between Marx and Luther, and once again draws on Boer’s much beloved concept of ambivalence.

The section on Hegel concerns itself with Marx’s use of his extension of the Feuerbach inversion to read Hegel and systematically break down his concepts of State, Sovereignty etc., by exposing their theological content: that they too proceed from abstraction. The content of theology and Hegel’s philosophy may differ but their form is remarkably similar (159). Boer then reads in to Marx an attempt to prove that philosophy and theology cannot enter into a dialectical relationship. Marx’s point being that – as the two are concerned with different worlds: one ‘real’ and the other illusory – philosophy does not negate theology and then raise it to another level in a dialectical motion. Rather, its mechanisms reveal theology as illusory and thus cause it to dissolve into itself (162). Boer works to show that Marx’s attempt to remove theology altogether fails, and that Marx himself then goes on to form a more complicated viewpoint himself: that the Christian State is actually the negation of Christianity (167-71). The result is that Boer’s analysis achieves its desired effect: both expressing the power of Marx’s theological charges against Hegel and exposing a repeatedly shifting tension in Marx’s notions of the relationship between theology and the state.

Before the final two chapters on Engels are two of the most interesting and powerful essays in the volume. The first concerns fetishism, and the second Marx’s famous dictum that religion is ‘the opium of the people’. In the former case Boer draws on the etymological substitution of the words ‘fetish’ and ‘idol’ and their meanings being drawn into equivalence, including in Marx’s own work. From there he delves further in to the echoes of the Bible (for example, Isiah 44: 9-20) which permeate Marx’s own view on fetishism. It is a chapter which puts Boer’s talents into sharp focus: his wealth of references, his own aptitude for biblical analysis (in particular 186-9), and his incredible familiarity with the thematic constant of fetishism in the writings of his subject. Here the relationship between theology and materialism finds some of its most powerful engagement in Boer’s whole project. The relation he draws between the conception of money as the alien mediator that supplants human interaction and the function of the figure of Christ (195-6) is beautifully articulated. The correlation being that in both cases, the mediator becomes the God, the relation rather than the object in itself, is what becomes ‘worshipped’. Boer concludes by showing how the idol/fetish equivalence leads to the possibility of a coherent theological critique of capitalism, and that Marx’s previous fumblings with illusion/reality in reference to Hegel find their own mediator in the material power of the illusion of the fetish. In the chapter that follows Boer returns to the ambivalence of ‘opium’, via Marx’s early writings on John; and he forges a picture of the multivalency of theology with some distinctly Derridean elements: translating the opium as a kind of pharmakon (224-5).

The final two sections are devoted to the work of Engels in whom Boer sees a kind of kindred consciousness in their comparable Calvinist upbringings. The main thrust of these two chapters is to highlight and then examine the fact that Engels’s own relationship to Christianity was always quite different to that of Marx. It The arguments start out by looking at the difficult self-exorcism which Engels had to undergo before his return, most interestingly, later in his work to a more radical conception of Christianity and the memorable assertion that ‘economics is not the only motor of history’ (279).

The Conclusion to the volume, in keeping with the author’s style, contains some neat summations of what he aimed to express in each of the chapters rather than any significant new thinking; but Boer’s use of the different etymological origins and meanings of the word ‘crucible’ as being a apposite metaphor for theology’s relationship to Marxism is direct, concise and expertly conceived (317).

The most common criticism of Boer’s project is its perceived lack of an overall thesis and unity of direction, but this criticism largely misses the point. Boer’s thesis is one which is revealed by accrual and in essence is a very simple one: that there is a complex current of theology which runs throughout the entire history of Marxist thought and that this, largely subterranean, river is worthy of deep and extensive examination. Too often this relationship is polarised rather than examined and, though communism and Christianity may not be able to exist side by side, they are inextricably intertwined, at once undermining and underpinning one another. On one level Boer’s style of approach is a triumph of the relationship between form and content. The anthological nature of the project, the explosive passion for the material above all other considerations, the slippage of terms and meanings, all find their answer in that nebulous crucible: they reflect the material from which they are produced.